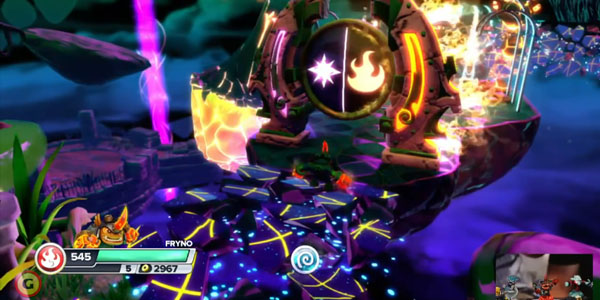 The info below comes from an E3 2013 interview with Gamespot. It is assumed information from this interview alone as well as confirming that older characters do indeed work in SWAP Force as the official site notes in their FAQ.

Skylanders collectors probably won’t have any issue with picking up new SWAP Force figures when they are released October 13th, however if you’re a bit tight on funds you’ll be happy to learn that one aspect of the game seems to support your current set.

So as pictured above, Skylanders: SWAP Force has new split element doors. Now of course, this doesn’t mean there aren’t any other split element items that can be accessed this way otherwise, but there is good news in this case. During a single player session, you’d be required to split a SWAP Force character that combines both elements. You see, in SWAP Force, you can combine the new figures by mixing and matching their top halves and bottom halves. The exciting news is, in co-op, you can just have two seperate Spyro’s Adventure or Giants figures it seems, and if they are the correct two elements, these doors will open!

Sure, the game does seem to require the new Portal of Power which is used to activate your figures in the game. However you’ll get Wash-Buckler, the octopus Skylander: SWAP Force character with the starter pack anyway it seems, so he’s just worth it alone for his cute figure. Hopefully he’ll be a good playable character too!

If all of this is accurate, that means you’ll be able to enjoy using your Spyro’s Adventure and Giants figures to play the majority of SWAP Force. Sure, odds are you’ll find some adorable combination you’ll want anyway and there will probably be some sort of advantage to mixed element Skylanders, but at least it some sense you can make use of your classic figures to enjoy a large portion of the new game, much like Giants came with Tree Rex allowing gamers to take on the new aspects included in that sequel. Sure, this doesn’t mean there isn’t SWAP Force only areas, but you’ll have at least two of those figures with the starter pack.

In closing, this does not mean you potentially won’t need the occasional seperately sold SWAP Force figure to access part of the new game. It does mean that you’ll have TONS of content to explore, including side accessed elemental unlockable areas, with your current figure collection. So at the very least the above pictured doors apparently won’t require SWAP Force only characters.