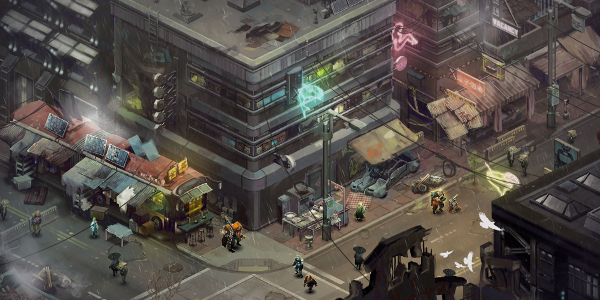 Shadowrun can sometimes appear as a mixed bag–some elements are extremely strong, while others lack polish and feel odd–but overall the game is a consistent source of quality. The development team at Harebrained Schemes clearly poured a lot of love into Shadowrun. The effort is what makes it so easy to forgive some of the games shortcomings, for what little they got wrong, they make up for it with so much right.

First off, the textures and environments for the level design are beautiful. The dingy city of future Seattle really comes to life. Lots of great colour choices help things pop out, as opposed to having a sea of murky grey and brown, where certain elements may not have been as distinctive.

However, the character models really seem to be lacking the same quality textures found in the environments, and more specifically, they lack variation. Most character models are incredibly similar, whether they’re NPCs or player controlled characters. It’s worth noting Shadowrun was funded off Kickstarter, and had a limited budget,  so these cut corners aren’t too surprising. 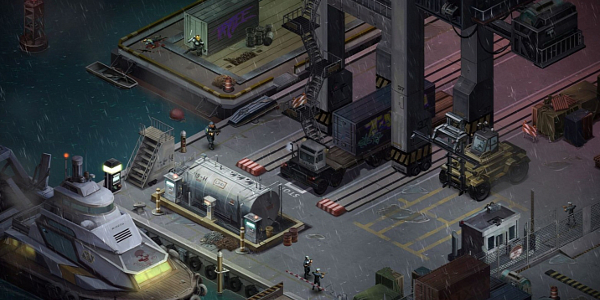 What I was not prepared for was Shadowrun’s score: the sound effect are pretty standard–a gun shot sounds like a gun shot–but the music in this game, it blew my mind. It’s an incredibly strong score. My favourite piece of music was the Shadowrun main theme; I will include a link below. The music throughout set the mood and really drew me in. It felt technological and futuristic, with ominous tones. Nice, higher tempo pieces in battle as well. I have nothing negative to say about the score; it was top notch, and helped with the immersion.

Speaking of immersion, let’s talk about the strongest element for Shadowrun, the story. It’s a dystopian, cyberpunk future, where metahumans have come into existence. What do I mean by metahumans? Orcs, Trolls, Elves and Dwarves . . . they all exist within this universe, where corporations own everyone and everything. These corporations are usually involved in some sort of secret warfare with their corporate rivals. Basically think Robocop meets Dungeons and Dragons. There are no laws to protect human rights; corporations may do as they please. They may not be the law, but they know how to buy it.

So in this disgusting and discriminating world, where what’s legal and illegal can change in the blink of an eye, what is a man to do? Many choose freedom, or something close to what we call freedom. They get sick of being a corporate wage slave, playing the political game to rise through the ranks. Maybe they were born poor, and want to find a way out. These people are the runners. They take a job to break the law, stealing one corporation’s secrets, and selling them to another. If you got a job, chances are a runner will do it, and they don’t much care what it is.

In the end, your runner can be whomever you want them to be. Human or metahuman. Psychopath or saint. 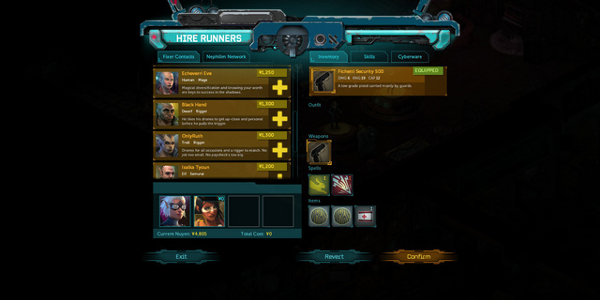 The story of Shadowrun Returns is not a pleasant one. Your friend, if you can call him that, calls you up. The only thing is, the friend is dead. Meet Sam Watts, a guy you used to pull jobs with that just so happens to be dead, with a dead man’s switch installed. Basically, when his heart stopped beating, you got the call. Sam thinks of you as a friend, or at least someone who had his back, so he wants you to find his killer and offers you his huge life insurance payout if you do. That’s the set up. Find who murdered Sam.

The story has a lot of great twists and turns; it really does a great job of keeping you interested with tons of side quests, and different ways to play, all the while trying to uncover truth.

The mechanics are also wonderfully put together. What Shadowrun lacks in physical character customization, it makes up for with incredibly deep ability customization. Your runner can be anything from a street samurai, wielding a katana and a shotgun, to a shaman, summoning and controlling spirits. There is even the option for a custom class that you can build from want from the ground up. There is so much variety in Shadowrun for what you can do, it’s almost overwhelming.

Of course, that is just the leveling system; what’s the combat like? Well, it’s an in-depth system as well. Shadowrun is turn based, with each character having a certain amount of actions per turn. It’s akin to XCOM: Enemy Unknown, but there is so much more depth here. You can hide in cover, attack with both melee and ranged attacks, and where it gets really interesting is with the weapons. Each type of weapon has its own set of special abilities that use up a character’s action points, allowing you to change attack types, which allows you to attack more strategically.

Much like XCOM, Shadowrun can be unforgiving. Thinking before acting is essential, or your runners may end up dead. 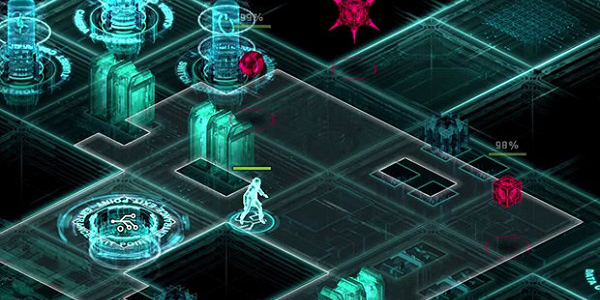 I only have a few complaints with Shadowrun Returns, and they are admittedly minor. There are the aforementioned character models. The lack of voice acting is disappointing, but again a very minor complaint, as it does not hurt the game. There is one complaint, however, that needs to be addressed. Shadowrun uses a top down view, much like Balder’s Gate, XCOM, and Planescape: Torment. Nothing wrong with that–I love RPGs with that camera view. It’s incredibly tactical. The problem here is, I cannot rotate the camera. There were times I was unable to move where I should have been able to, because something in the foreground was blocking me. This seems like something so obvious I cannot believe it was overlooked.

Aside from the frustration of the fixed camera, it’s hard to bash Shadowrun Returns. This is a quality RPG made by a small team who clearly loves the source material, and wanted to treat it with the respect it deserves. The visuals are strong, and the score is incredible. The gameplay and mechanics are as solid as it gets. Shadowrun Returns deserves your money. Buy yourself a copy, and one for a friend. You will still spend less than you would with a “AAA” release, and with the awesome user generated content, along with future DLC, you can’t go wrong. I’ll see you all in the Shadows.