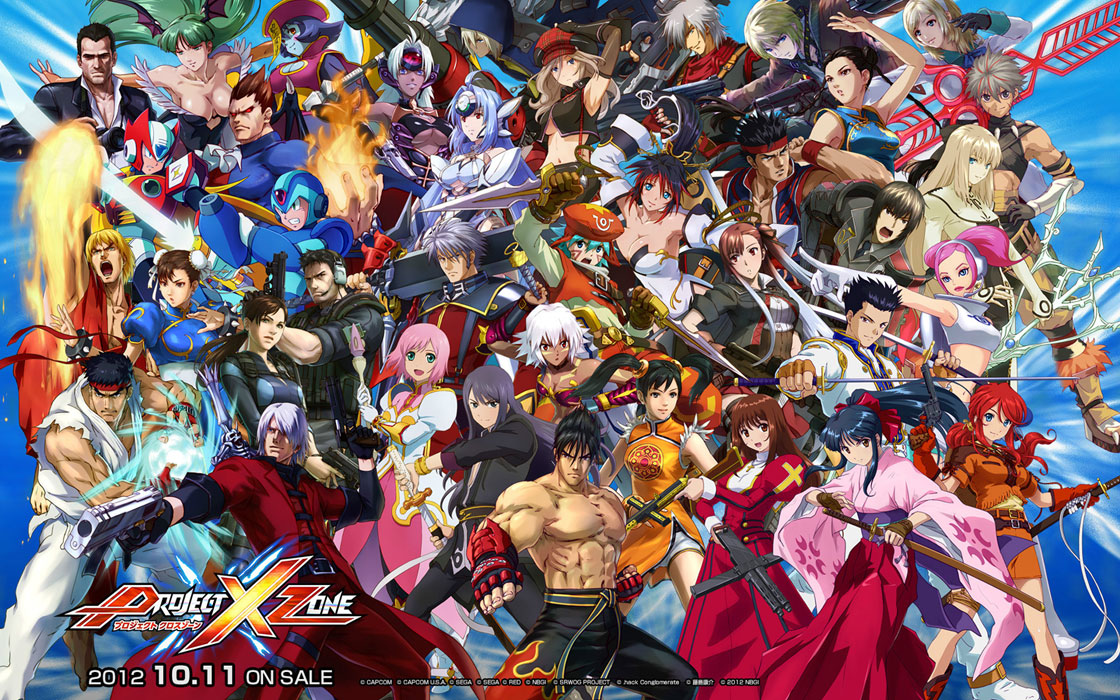 Namco Bandai × Capcom × Sega. No, you’re not reading this wrong, Banpresto and Monolith Soft have joined together to co-develop Project X Zone. This is not a fighting game (sorry versus fans). Project X Zone is a tactical role-playing game featuring characters across popular series such as Street Fighter, Megaman, Sakura Wars, Resonance of Fate, Xenosaga,and Tales of Vesperia, among others. For the very, very few of you who played Namco × Capcom (not to be confused with Street Fighter X Tekken), this game is no surprise. The story is what is expected of crossover titles: an artifact is stolen from original characters Mii Koryuji and Kogoro Tenzai, which triggers a chain of events where different universes begin to intertwine, which throws characters from different franchises in alternate worlds. Tron Bonne from the future lands at Willamete Mall, where Frank West is from, to give a perfect example.

Overall, there are 40 characters, divided into 20 pairs. As you go across chapters, you gain additional pair units and assist units. You can pair up any assist unit to pair unit, but you can’t split pair units. So the Ryu/Ken unit can be paired with Ulala, but you can’t have Ulala/Ryu/Heihachi, etc.

All pairs are from the same game series with the exception of Darkstalkers. The three Darkstalkers characters are paired with characters from a different Capcom series. Morrigan is paired up with Chun-Li from Street Fighter; Demitri is paired up with Dante from Devil May Cry; and Hsien-Ko is paired up with Frank West from Dead Rising. The rest of the Capcom side is made up if Chris and Jill from Resident Evil, Ryu and Ken from Street Fighter, and X and Zero from Mega Man X. The Namco side has Yuri and Estelle from Tales of Vesperia, Jin and Xiaoyu from Tekken, Kite and BlackRose from .hack, Kos-Mos and T-elos from Xenosaga, Soma and Alisa from God Eater, Haken and Kaguya from Endless Frontier, and Reiji and Xiaomu from NxC. The Sega side is made up of Zephyr and Leanne from Resonance of Fate, Toma and Cyrille from Shining Force EXA, Akira and Pai from Virtua Fighter, Kurt and Reila from Valkyria Chronicles 3, and two pairs from Sakura Wars: Gemini and Erica and Ichiro and Sakura.

The solo units are made up of other franchises, with close to half representing other characters who have a pair unit available, such as Vashyron from Resonance of Fate, and Lady from Devil May Cry. If some of those characters made you scratch your head, don’t worry, since Project X Zone has a handy in-game encyclopedia which tells you the basics of the character and their role in their game. 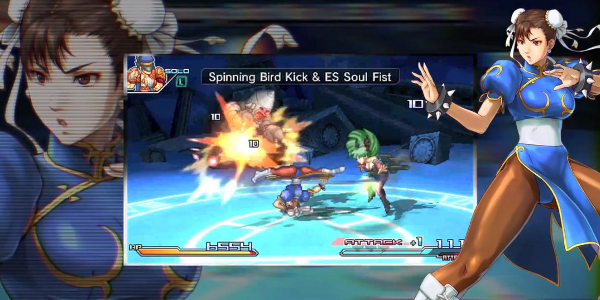 The gameplay of Project X Zone can be divided between the map screen and the battle screen. The map screen has a grid where your character will move in real time, with stages representing the various locations the characters are from. Unlike Namco × Capcom, you can move freely and not get penalized for grabbing chests or destroying objects. The battle screen is similar to how it was in Namco × Capcom, with attacks being performed by pressing either left + a, right + a, down + a or up + a. What you’re looking for is to chain them in the correct order to do the most damaging combo to an enemy. When pairing a solo unit to your pair unit, hitting the L button will bring that character along to do attacks; likewise, when engaging an enemy, if you’re close to another pair unit, they can jump in to assist you with the R button.

The experience (xp) bar has four purposes for you in battle. First, when past 100%, you can perform “cinematic supers” after your combos for more damage, or you can hit start and switch to multiple attacks, which is another variation of the cinematic supers. The xp bar is also used for defense. When an enemy unit is about to attack, you can spend a set number of the bar to counter attack, defend some, or defend all of the attack. Lastly, the bar is used for skills. Like traditional RPGs, characters have skills that either heal, remove statuses, increase a stat, or increase movement. Skills become useful towards the end portion of the game, as by this point you might have exhausted all or most of your items.

The soundtrack is made up of various iconic tracks from the multiple universes Project X Zone pulls from, such as Ultra Violet from Devil May Cry, Volcanic Rim from Street Fighter, the piano intro from Tekken Tag Tournament, and the first stage theme from Mega Man X 4, among others. The dialogue is in Japanese with English subtitles.

When combining your pair units with a solo unit, try to always mix and match, as pre-fight dialogue may differ if characters have things in common. For example, placing Batsu from Rival Schools with Ryu and Ken has Batsu informing the duo how his friends have learned many of their techniques. Or, put virtually anyone with the team of Morrigan and Chun-Li, and watch Morrigan find a way to insult her. 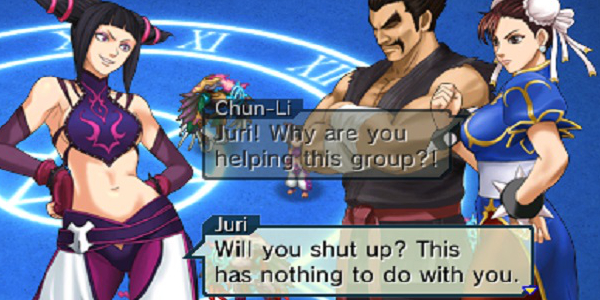 With all this praise you’re probably wondering if the game has any flaws, and they’re three things that instantly stick out. For one, at times with all the chaos on the screen, frames will drop. It doesn’t happen frequently, but when it does it’ll mess you up a bit when you’re into the action. Another issue is the replay value, because once the game is complete, you can start New Game Plus at a harder difficulty, but that’s it. The last issue is with one of the solo units. Hailing from Yumeria comes Neneko; from the outside, she appears to be a small child, but while I can’t go into major details since I’ve never played Yumeria, Neneko’s voice is probably the one that will make you cringe the most, because you can’t help but wonder why is she here with the likes of X, Dante, Ryu and Heihachi. Overall if you’re a fan of all these series and want to see them in a tactical RPG, check out Project X Zone.