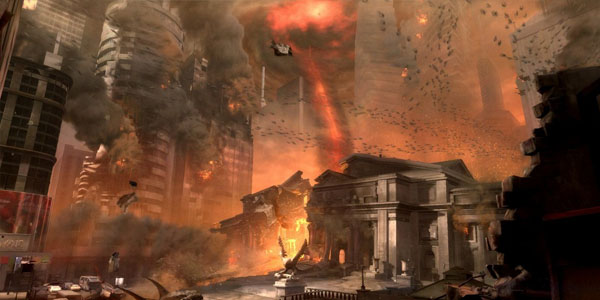 After a recent article on Kotaku that makes for good reading, I wanted to throw in my two cents about the mentioned concepts of Doom 4.

As many of you by now know, Doom 3 was moreso a retelling of the story of Doom 4. Kotaku’s article mentions that Doom 4 was originally going to be a retelling of Doom 2. Right away that sounds like fantastic news, but it went further than that. As in the second Doom game, this concept would have taken place on Earth. That and it seems the struggle of humans in this new world would have been explored, rather than in the original Doom 2 where you didn’t meet anyone who wasn’t a zombie soldier.

It sounds like the game has gone through a reboot since then, so we don’t know if this storyline is still the focus or not. Doom 4‘s original concept was being likened to Call of Duty a source had said. It seems like the game was more cinematic than they were intending as well. Having never seen this production, I can’t say for certain what I would have thought of it. Doom of course has it’s own style, however it still is being made by a very talented team that would have known how to use that cinematic feel and make it their own I’d think.

I’m glad to see Id taking their time with this, and I do wish them all the best. It’s definitely a title I’m eager to see the outcome of. The original Doom games especially were wonderfully unique with scripted events leading to surprises. Sure back in the day those were very basic things such as a wall sliding away behind you to reveal a hoard of enemies, but it worked well! Doom 3 took that a step further making sure you didn’t know what to expect. Now gamers can even experience Doom 3 BFG Edition which includes the Resurrection of Evil expansion and the all-new ‘Lost Mission’ chapter.

We’re cheering you on Id! When Doom 4 is released, we’ll be eager to see your next addition to the series. Personally, I like the idea of going back to Doom 2. I don’t know how well the novels tie into the series itself, but they offer an interesting look into the world of Doom. In this day and age who wouldn’t love a shooter set on Earth with all the baddies we love from the series?