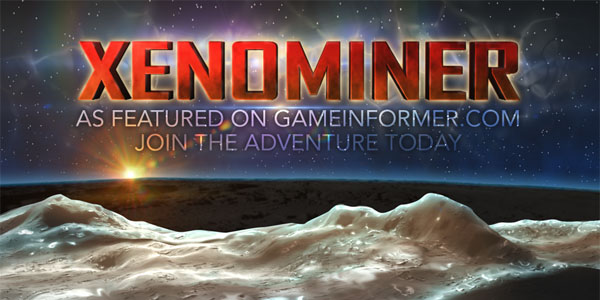 XenoMiner is a voxel based game similar to Minecraft that I’ve been playing recently. I figured I’d continue my voxel news from my last article on the VoxelFarm engine with this article about a game I’ve grown quite fond of.

Naturally it’s easy to get caught up in any voxel adventure. One creative idea leads to either collecting resources, or using an infinite resource mode to place blocks to make something. Unlike the usual biomes or areas you’re used to in voxel games, XenoMiner crashes you on an alien moon with no oxygen in the atmosphere. 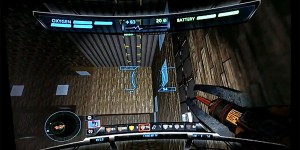 Trading the usual fantasy landscape for a sci-fi one I found instantly interesting. It’s basically just a cosmetic change it seems at first, but then when you start recieving messages from your ships computer or such and collecting ice to manufacture into oxygen at the games version of a work bench it does distract you from brushing the game off as just another Minecraft. You’ll also collect materials around and in the moon to make new tech to improve your living situation and make new devices.

As I continued building, I found myself asking why I was doing all this. But the creative side of the game kicked in and instantly I began thinking of what anyone would do in such a situation. Perhaps somehow I could signal for rescue or hope that eventually someone would find me. Of course I don’t know if such a situation exists in the game (at least not yet anyway, who knows, XenoMiner is still being updates) but it encourages you to continue on playing out this role. That and of course I wanted to continue making a nicer place to live in, since I probably would be here awhile.

Survival is important in this game as well. Unlike most voxel adventures, you’ll want to do most of your surface exploration at night. That’s due to radiation from the sun on the alien moon being too much for you to stand for long. There’s nothing like reading the sun has gone below the horizon and scrambling out of your mine to explore the surface for another night. Also, aside from making ice into oxygen for your tanks, you’ll also often use solar panels on the surface to charge up your batteries for your mining pick ray gun and on suit light. No worries, you don’t have to reach the solar panels, they can transfer their energy within a radius to charge your batteries wirelessly.

There is that edge of wonder too. You don’t know what to expect in XenoMiner. What is out on the planet? Producing more processors for your work bench machine allows you to make new devices and better equipment. How far does that go?

In an interview with Gameinformer XenoMiner developer Jesse Nivens noted:

“We do want to add more survival aspects to the game, and right now our focus in that area is in adding aliens. We also want to improve the survival experience by allowing the player to build shelters that can evolve into something much bigger, and the first step in bringing that to the game is with sealed rooms with breathable oxygen and environmental protection.”

There’s even aliens on the way? Sealed rooms? Just recently they even upgraded the textures in the 1.30 update! So how much is this indie title on XBLA? 80 MSP! It’s currently just a dollar! I definitely recommend giving this game a go. I know I’ve enjoyed it and will continue to do so. Thanks Gristmill Studio for a great game!