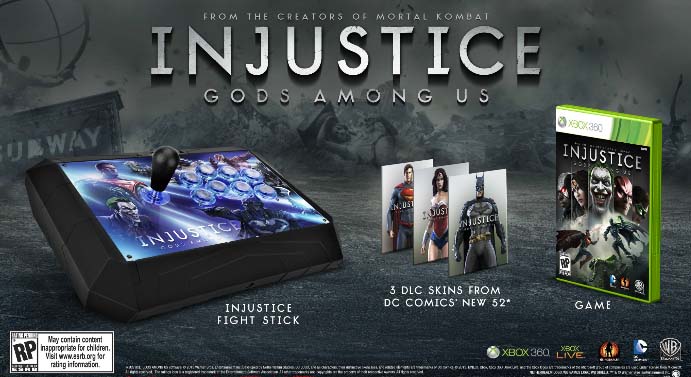 Injustice Gods Among Us has to be one of the most exciting fighting games to be announced in quite some time. We now  have a solid release date for the game as well as the announcement of premium and collectors editions thanks to publisher Warner Bros interactive.

You’ll be able to pit your favorite DC super heroes against each other on either PS3 or Xbox 360 this April  16th. Aside from the regular $59.99 standard edition Injustice Gods Among Us also comes in a $99 Battle Edition which includes  a limited edition fight stick, 5 DLC skins and the game. The $149 comes with  a collectable figurine, digital movie download and 5 skins as well as the game.

Coming off the spectacular Mortal Kombat from 2011 Nether Realm Studios has a chance to show us what they can do with the DC comics license, after 2009’s Mortal Kombat Vs. DC. Personally I was a little disappointed by the MK VS DC game due to the T rating but Injustice looks pretty awesome. That fightstick would make an excellent addition to any fighting fan’s collection.

Check out the full PR text after the jump.

Injustice: Gods Among Us Battle Edition and Release Date Revealed

Warner Bros. Interactive Entertainment and DC Entertainment today revealed details for the Injustice: Gods Among Us Battle Edition. The package will be available in limited quantities at Gamestop and EB Games stores located in the United States and Canada for Xbox 360® video game and entertainment system from Microsoft and PlayStation®3 computer entertainment system. Injustice: Gods Among Us Battle Edition is also confirmed to be available in North America beginning April 16 for Xbox 360, PS3 and the Wii U™ system from Nintendo.

The Injustice: Gods Among Us Battle Edition will retail for $149.99 and includes the game disc, exclusive Injustice: Gods Among Us Fight Stick featuring official artwork from the game and three exclusive skins based on Batman, Superman and Wonder Woman from DC COMICS – THE NEW 52.  The Fight Stick is a lightweight controller that boasts a non-skid foam underside, a lockout feature for the Start, Select and Guide buttons, as well as adjustable illumination for the buttons and joystick.