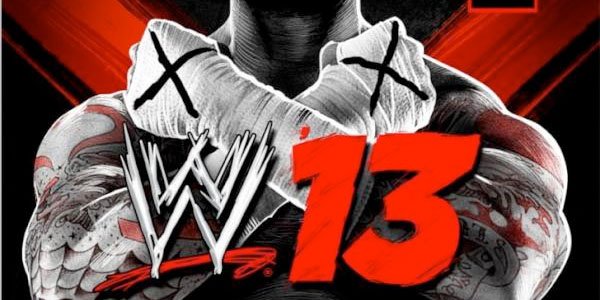 Woo Woo Woo You Know It, it’s time for the annual WWE release with WWE’13, developed by Yuke’s and published by THQ. The game was released on October 30th for the PlayStation 3, Xbox 360 and Nintendo Wii consoles. The game is the second of the WWE series of games but the fifteenth overall in the combined series. This review is based on my experiences with the Xbox 360 version of the game. The question now is should you go smell what WWE’13 is cooking? Or avoid it like the rebranding of ECW in 2008. Find out below.

The biggest point of WWE’13 is the inclusion of the Attitude Era, one of the most memorable times in professional wrestling. Right out of the box you have your choice of playing with 36 current WWE superstars, 7 current divas, and 4 attitude era superstars. If you pre-ordered the game, you also received Mike Tyson as a playable superstar. That surprised me as the main focus they were promoting for the game was the Attitude Era but only 4 playable stars right out the box. Although if you purchase Fan Axxess which is WWE’s version of the Season Pass (and for those who don’t know, it was WWE who originally started the idea of Season Passes), you also get two additional superstars Goldust and Diamond Dallas Page who are also from the Attitude Era (This is the only way to get these two stars). Currently available now is the Attitude Era pack as well which would net you Rikishi, Val Venis, Too Cool and Gangrel.

Replacing the previous year’s Road to Wrestlemania mode, is the Attitude Era Mode which allows you to relive classic moments of that generation. You are introduced to a video package which briefly talks about the Monday Night Wars between WWE’s Raw is War and WCW’s Monday Nitro. The mode has you playing through the WWE’s side of the war with a timeline constantly moving as you progress through the mode, showing what caused an increase of rating for either side. You also play as characters that played an important role in what would eventually allow the WWE to win such as The Rock, Stone Cold Steve Austin, The Undertaker and D-Generation-X. Matches stay true to their time with commentary provided by (Good Ol’) Jim Ross and Jerry “The King” Lawler. While playing they reference what is currently occurring during the specific storyline or that specific time frame. For Jim Ross fans however, this is the only mode where he provides commentary. Matches are transitioned with video packages from the past which summarize what is happening in the storyline before you’re tasked to assume the characters role again. 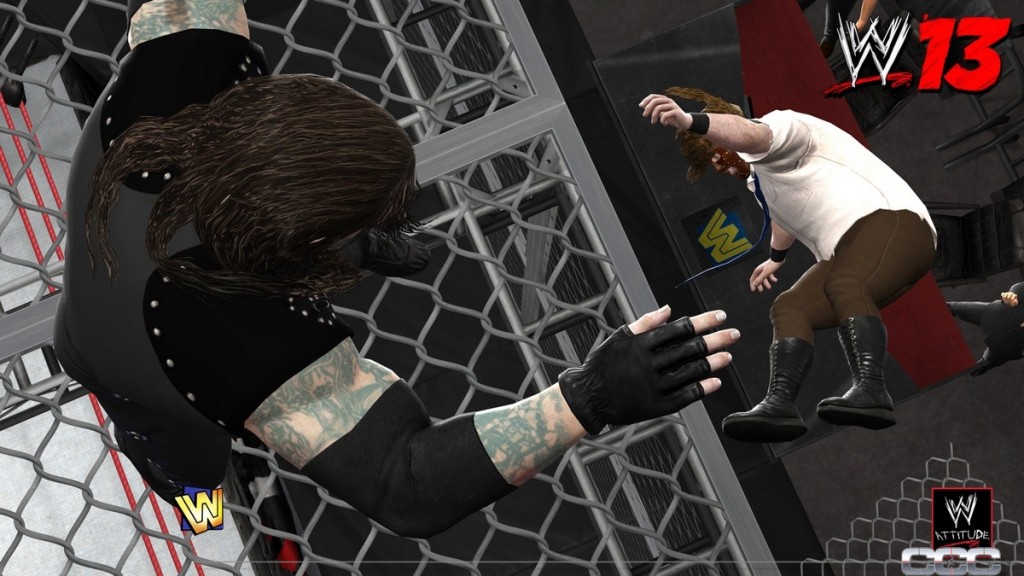 Gameplay in the Attitude Era follows requirements found in the previous Road to Wrestlemania’s which is usually winning the match in a specific way. However other than what’s required to win, you’ll see Historical Bonus Objectives which will have you perform specific tasks which occurred in those matches back then and upon completing them, unlocks the majority of the hidden goodies the game offers including the entire roster of the attitude era superstars and divas, classic arenas, championships, attires, etc.

Outside of that mode, the basic modes found in the series can be found. Exhibition mode (Called Play for some reason) has the various selections of match types and rules. New to this game is the return of the I Quit Match, which has been out of the game for 8 years. Also returning is the Special Guest Referee match which has been gone from the series for about the same amount of time as the I Quit Match. King of the Ring is also found under the play mode which replaces previous create your own tournaments and the winner will be shown sitting on his or her throne at the end of the tournament. (Yes, you can make a divas King of the Ring match but they will still be called the King of the Ring). Speaking of Divas, after much request, they can be placed in match types that ask for 6 divas at a time. Previously the limit of Divas in a match was at 5 so this is welcome. 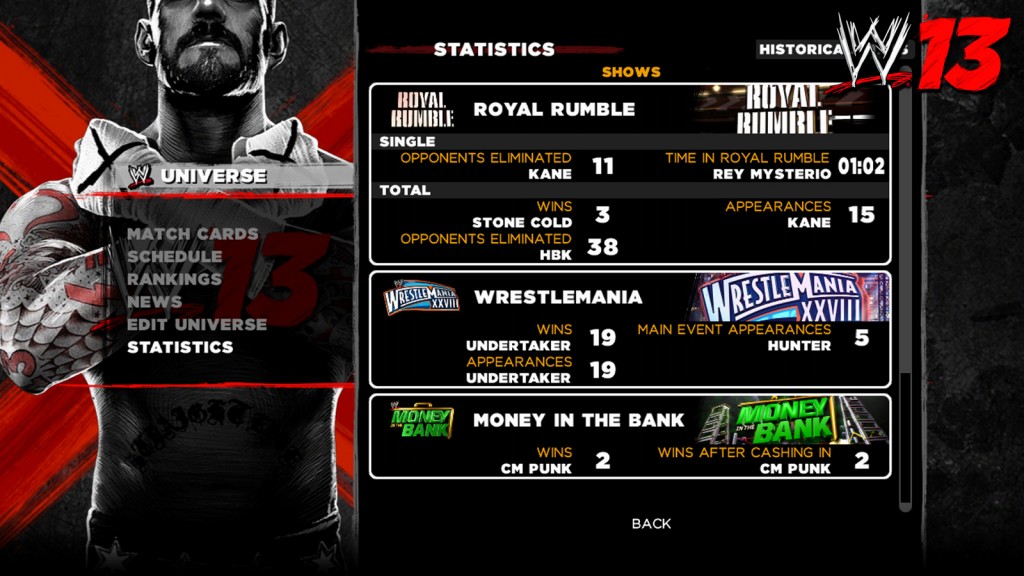 The creative suite of the WWE games returns. You can create a superstar, entrance, move-set, finishers, story, logo, arenas or highlight reels. Each mode improves a bit more from the previous version, allowing for more options than before but nothing major. WWE Universe mode returns as well and while it looks similar from its predecessor, the winds of change blew new life into this already impressive mode. You can still edit specific characters whether they are faces (good guys) or heels (bad guys), create tag teams and create what comes to mind. New to it is choosing if a superstar want to pursue a secondary championship, turn the stories that can form in universe on or off, track the stats of titles, shows and historical stats. You can also create your own show on the calendar and set specific number one contenders.

Gameplay and the controls for this game remain largely unchanged from the previous version. They upgraded the engine of the game which allows for more fluid animations and attacks now hone in on opponents, no more randomly jumping from a turnbuckle and missing for no real explained reason. Also if you cause an opponent to bleed and punch them, your fist will have their blood on it (that is if you turn blood on). There is also a weight system which is connected to the new engine which prevents small superstars such as Rey Mysterio from being able to lift a larger opponent like the Big Show. 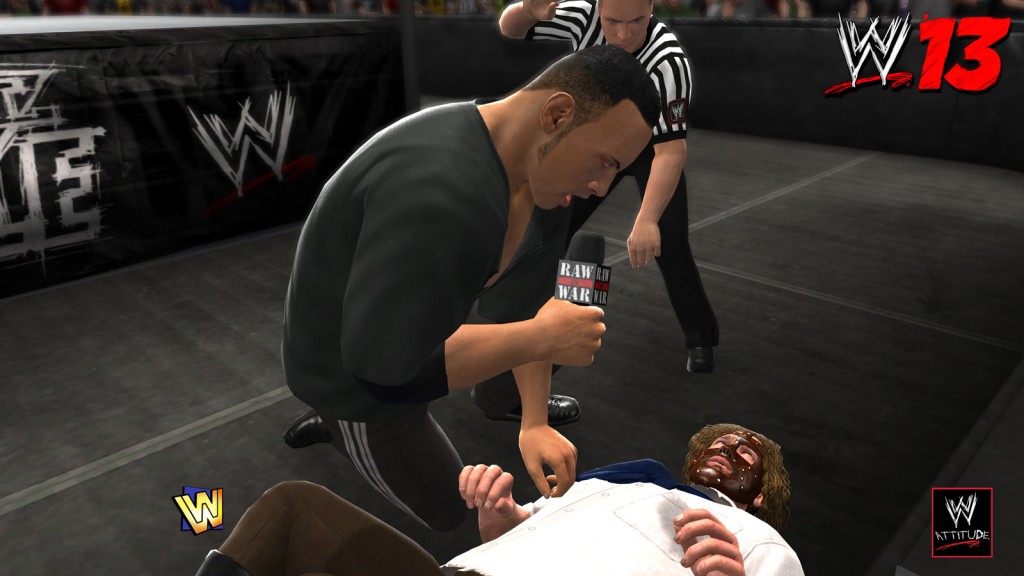 Noticeable new gameplay items is the OMG moments, which allow for environmental moves such as imploding the ring (Brock Lesnar vs Big Show), breaking the barricades (who didn’t Mark Henry throw through there) and performing mid air finishers (remember when Evan Bourne was hit out of his Shooting Star by an RKO from Randy Orton?). When finalizing settings for a match you may notice something called match experience. This sets the pace of the match with three options: a normal match, a quick match where you can end them quickly and epic matches which feel like ppv matches where opponents never want to stay down.

The audio this time around is taken from actual WWE crowds at events and while it’s better than generic ramblings, it’s not implemented very well in the game. When the crowd becomes overly excited, they are louder than what’s going in the ring and even the announcers. While it’s a quick fix going to the audio options to lower the sounds, hopefully they work on it a bit more. Commentary is still something that needs fixing as well for the series and other than a few moments in the attitude era mode, the rest sounds very bland. (Ironically the last time I enjoyed commentary was when playing at arenas where commentary was provided by the ECW brand). 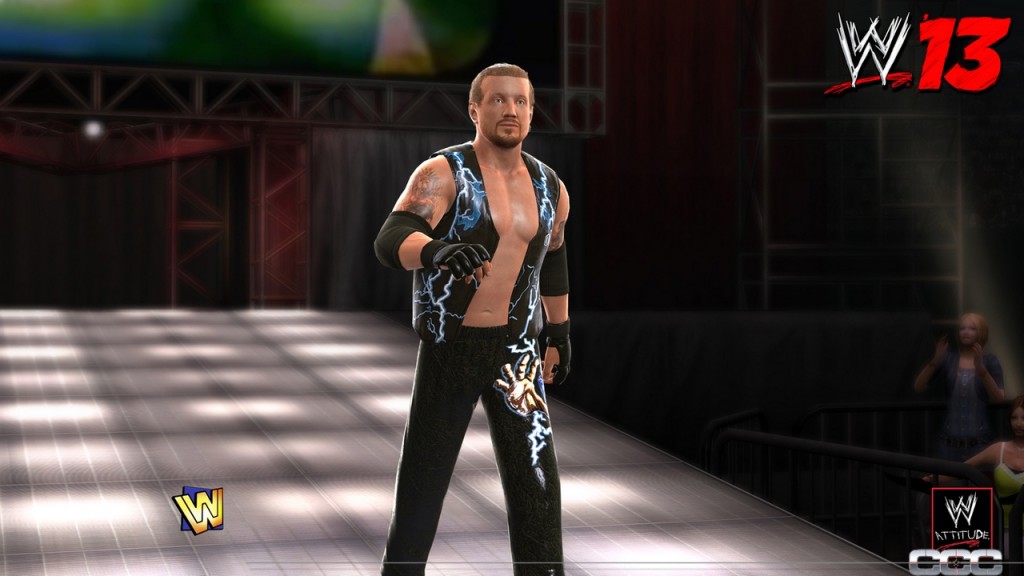 Finally we arrive at the online for this game. For starters, when I first attempted to enter the Xbox Live mode, I was told the servers were unavailable. When I selected it again, I got it. Online you can play rank matches, player matches or upload your created items to share with others and download any you enjoy from others. The visible lag is extremely less compared to WWE’12. I played matches with random people and afterward checked their locations. The majority of my matches, I was paired with people from the UK and no lag. Does this mean they finally got online right? Not exactly, what I’m assuming is a majority of players playing on the servers, playing at a later time I noticed that transitioning from menu options took about two to three minutes and if you’re tired of waiting, unfortunately you can’t cancel and must wait for the options to load.

After the leap Yuke’s and THQ did with WWE’12, they played it a bit safe with WWE’13 which is not a bad thing. I feel heavily promoting the Attitude Era takes away from the current superstars in the game, they could have made an exclusive game for the Monday Night Wars (WWE vs WCW anyone?). The old saying if it ain’t broke don’t fix it applies but that doesn’t apply to online however. The audio at times distracts from the match but overall it’s a good game and with DLC character, moves and titles releasing between now and January, you’ll enjoy this game. Those who won’t enjoy this game is most likely not a wrestling fan, and that’s the bottom line because Kash Howard said so.