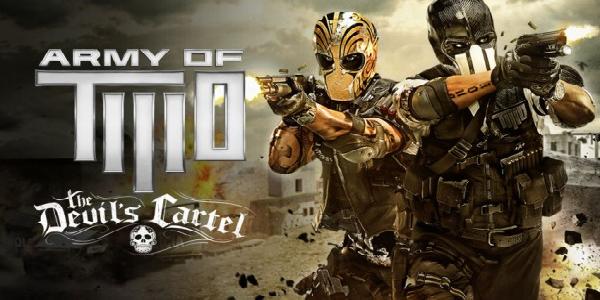 Army Of Two: The Devil’s Cartel was announced a few months back. Since that time there has been a slow trinkle of news coming out for a game that is supposed to launch in Spring 2013.

But that all ends today as a Limited Edition has been announced for Army 0f Two: The Devil’s Cartel. No, this Limited Edition doesn’t cost any extra…all you have to do is go pre-order it – which is a win for all!

So here is the new trailer showing off the TAH-9 pistol that is included in the Limited Edition:

For more details about the contents of the Limited Edition, read after the jump.

Here is what is included in the LE for Army Of Two: The Devil’s Cartel:

Tactical Co-op Gear: Lay down sustained cover fire for your teammate with the TAH-9 side arm, decked out in your TAH-9-textured polymer outfit and mask.

TAH-9 – Unload on your enemies with the TAH-9, the game’s only fully automatic handgun!

Overkill Extras: Unleash massive destruction as you execute an action-packed mission with an automatic shotgun and your Overkill mask and outfit.

Overkillers contract – Go on an Overkill rampage throughout this new mission designed for nonstop frenetic co-op.

Celebrate the Day of the Dead: Bust out your Day of the Dead themed assault rifle and take on Mexico’s most ruthless drug lords in your DoD outfit and three masks.

DoD outfit and masks – Put on the face of fear with not one but three custom Day of the Dead masks and one fuego outfit.

No specific release date has been narrowed down yet except for a launch in Spring 2013. With Visceral Games behind this “reboot” of Ao2, you know…the team behind the awesome Dead Space franchise, I expect this to be the best one yet.