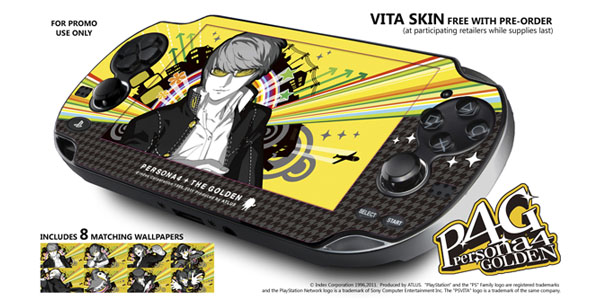 Persona 4 Golden is coming exclusively to the PS Vita this Fall. Atlus has announced a pre-order bonus skin for your Vita! Manufactured in Japan by Dezaegg, this Vita skin is the same one made available to Japanese fans, including the original title for the game, Persona 4: The Golden.

Included are eight exclusive matching wallpapers as well, each featuring a main character from P4G. The game is a remastered version of Shin Megami Tensei: Persona 4 released for the PS2. Mixing social simulation and dungeon exploring the Golden version features a new character, more voice acting and animated cut scenes. P4G also adds a new wireless feature allowing players to call on others for support when their party members are close to dying.