Ever wanted to just go down a street and just destroy everything in its path? I know you have, so did I. I would be lying if I didn’t. That’s where Gratuitous Tank Battle comes into play. If you ever wanted to tear down your city streets with mechs, tanks, and other cool military weaponry; then this game is exactly what you will want. Gratuitous Tank Battles is an action game that takes to a mix of different genre of gameplay. The hybrid set in place here is mixed with: Tower Defense to a Real-Time Strategy games that works very well. You have set places to place your units as they either march their way passed the defenders or explode in a fire bullets and sinew. Want to know more about it? Of course you do. 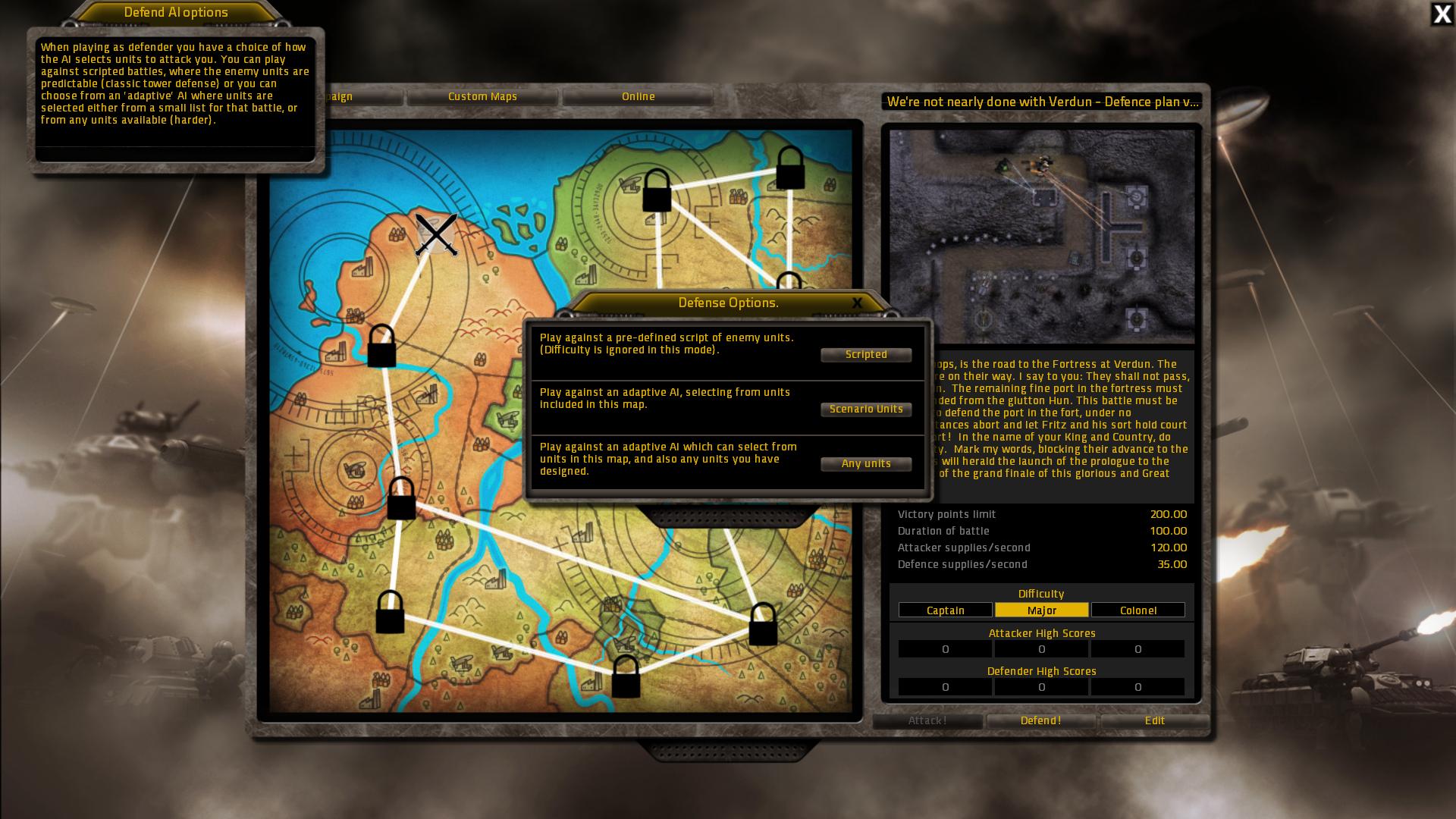 In GTS, the player is given the choice of different types of gameplay modes. You can either defend as much as you can without letting the attackers go by, or you can be the attacker yourself. You are in control over the destiny of your units. As you play the game, there are a few things to notice. The first is that you are in a top down view of the game. You can use your mouse wheel to scroll in and out of action on the field. As you scroll in, you’ll want to pay attention to the sound as you zoom; the sound will transpose from epic battle music to the screams of war going down on the ground level. Playing the game you will notice how the game looks. GTB get’s prettier when you are zoomed in, however, the graphics are a bit crude and muddy. Nothing really stands out in some of the tank designs as they are mostly a big colored texture that will move.

There are multiple modes of play and some interesting choices of how you play the game. In terms of game modes, you have an online mode and then you can play locally on using a couple of cool AI modes. Before playing the game, you will get to choose the type of AI you want to play against. This can be done against attackers and defenders. The gameplay is largely the same for both types of gameplay. Attackers will be the one rolling into town and you are tasked with placing units at the beginning of a road in order for them to move.  The AI options to choose from range from scripted AI which will act in according to how the developers have programmed. This will not change in difficulty and the user, depending on the difficulty they choose (Captain, Major, Colonel) will be harder in the high difficulties like Colonel. The user can also choose from adaptive AI constraints and makes the game a hell of a lot better since the player  will have to adapt to the behavior of the AI. This in turn will make the player have to choose a good strategy against the opponents. 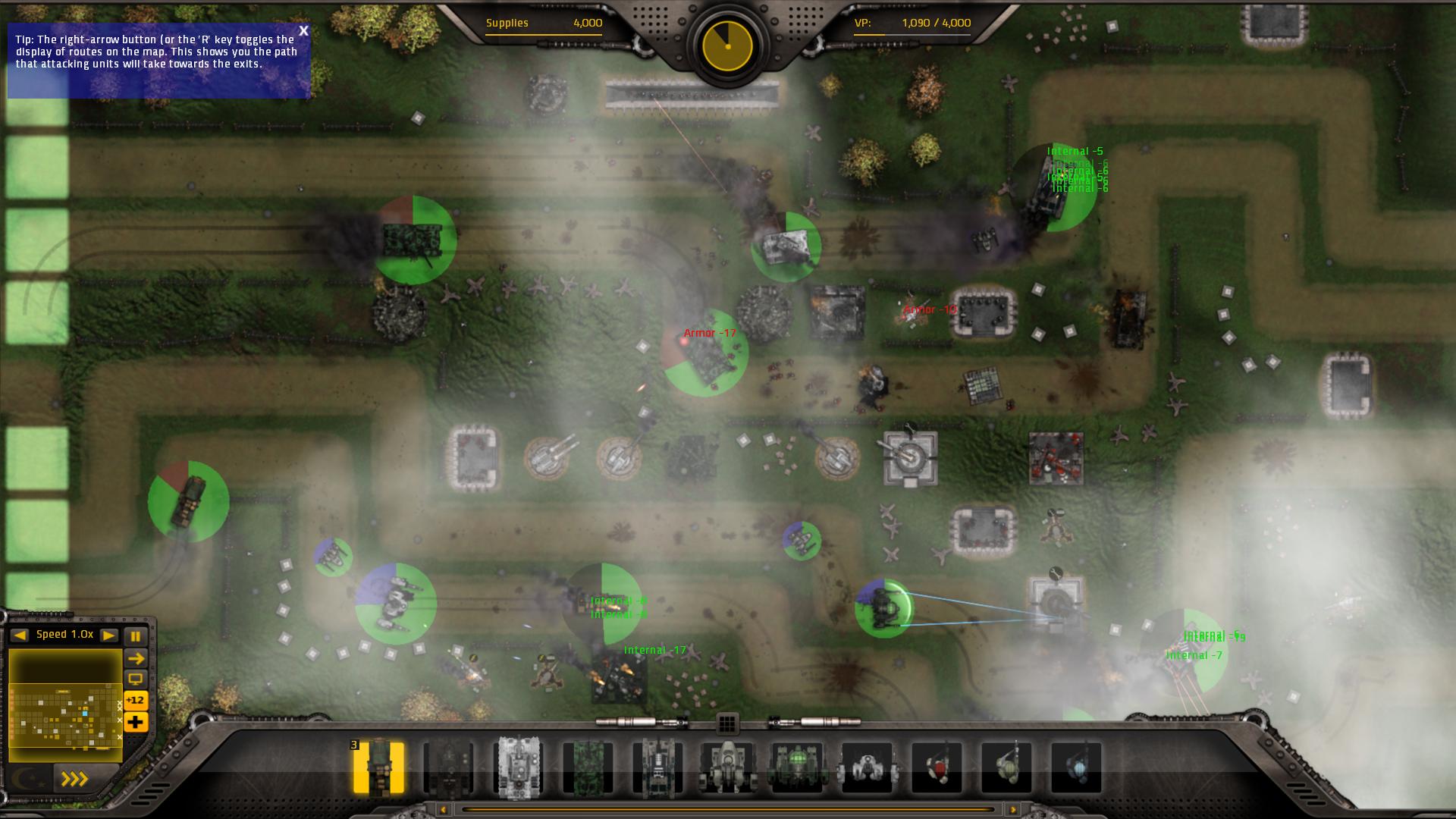 GTB can then take your battle online and play the same levels that you played in the single player campaign. Like the play modes of the single player, you can choose your attack mode (either defend and assault). While playing the game, you will get to choose your defensive capabilities or assault capabilities. These range from assault towers to soldiers holding beam riffles, yeah, beam riffles. The concept is pretty simple if you’re attackers. Guide your battalion to the end of the map, this way you will be able to earn VP  or Victory Points (No, not Vice Presidents, silly!). You will also gain a lot of VP buy guiding Supply Trucks to the end of a race. The action is fast paced. You will be scrambling to keep the defenders at bay so that your supply trucks will safely move to the end of the map. I noticed that a lot of times as the attacker, all you have to really do is slam on the gas and start plugging in units like: mechs and tanks so that you will be able to get across the goal quicker. Defending is the same except you don’t move and of course have a different goal, destroy the attackers.

When it comes to customization, Gratuitous Tank Battle has it pretty deep. You can customize every individual unit in the game. In addition to customizing your own units, you will be able to plug these units in your game to create the ultimate army of destroyer. I created a very plain type of unit with some pretty good upgrades to use in the game. You can attach a number of weapons like:  guns, lasers, and flamethrowers to the your tank. GTS also allows you to edit the color and the type of armor style of the game. It’s not as deep as some other games I have played, but it will definitely sit well with the RTS fans. 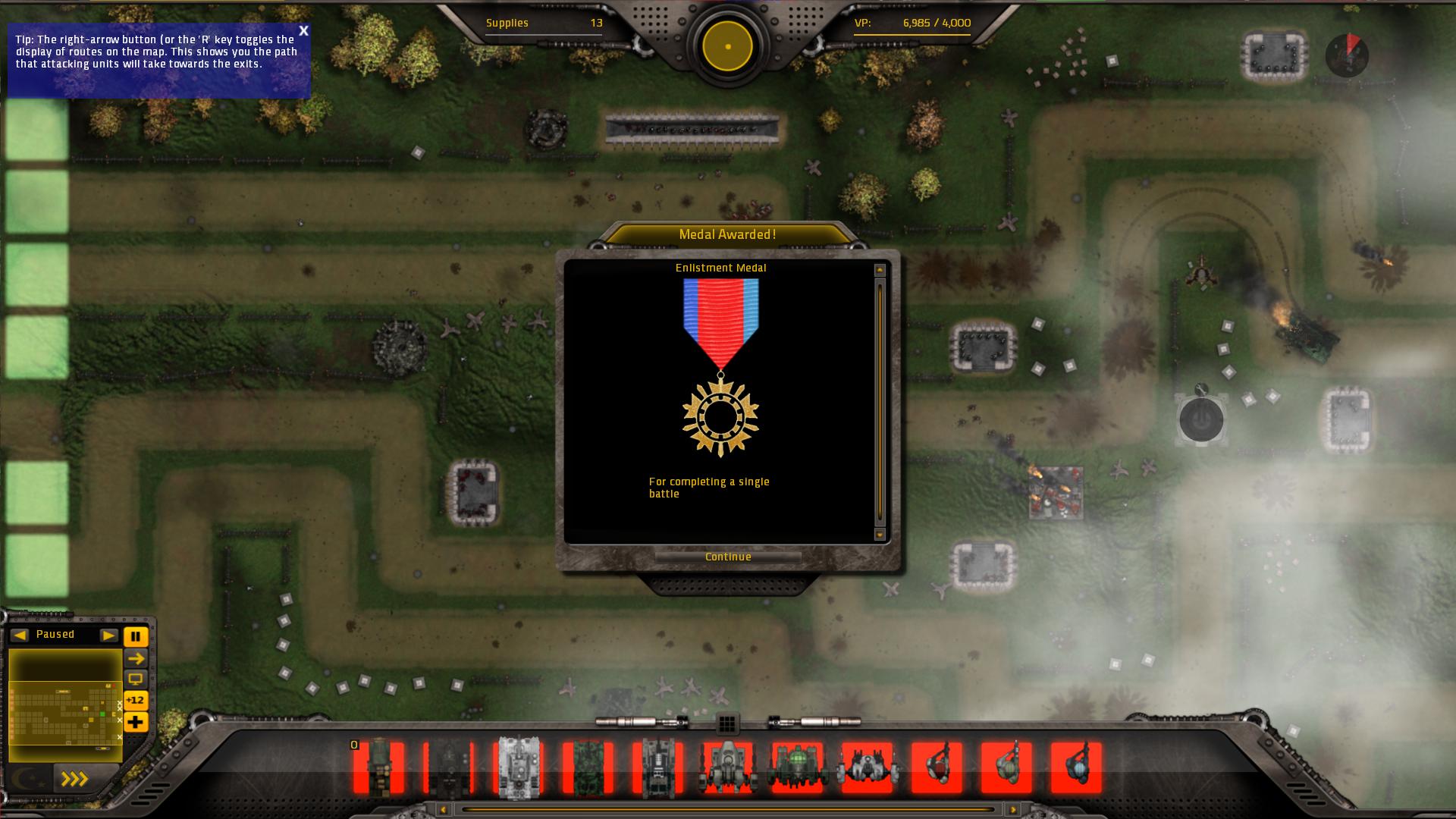 If you’re new to the game and genre, the people at Positech Games Interactive has bombarded the game with tutorials so that you know how to navigate and play the game. I found it to be a little bit intrusive at times and navigate when first entering a new area of the menu system. Sometimes choosing some of the options in the customization  menus were a little bit more fluid. As an example, when choosing a color, I couldn’t hold down the mouse button and scroll the color area in order to chose a color. While the game is very fun and frantic, I also found the game can be a little bit overwhelming for beginners.

I found that Gratuitous Tank Battles is a really fun game. While the graphics and some abundance of some of tutorials may deter the user, there is no denying that the gameplay is fun and will keep you enthralled for hours on end. The deep customization will keep players interested and unlocking a lot of the features will definitely add more crazy and hectic mayhem in your future.