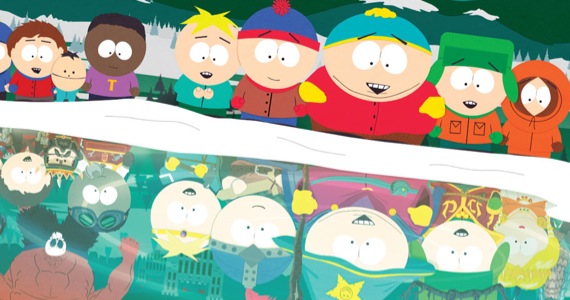 Matt Stone and Tray Parker come on stage after a new trailer for the highly anticipated South Park: The Stick of Truth. The South Park creators discussed their time mapping out the town of South Park and praising the visual style.

Although they didn’t have much time to talk about the game (because they had to leave and work on the game apparently) they did have the time to get a good couple quips out and definitely build the hype for South Park: The Stick of Truth.

The story trailer for the game looks great. The first thing you see is the distinctive South Park style had been captured perfectly. The trailer really creates the atmosphere of a grand fantasy epic showing off the four kids and hyping up that the main character is…YOU! Despite no actual game play footage being shown there was a lot of possible enemies mentioned by Cartman in exposition, which will get any fan of the show excited for this title.

Stay tuned for more information on South Park: The Stick of Truth after the conference and as it becomes available.