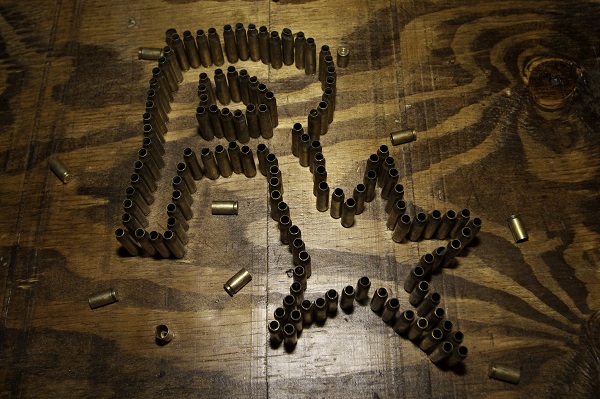 A couple of weeks ago, I was given an opportunity to head up to New York City to hang out with some friends from Rockstar Games as well as some other website guys that I’ve had a chance to get to know over the years at similar such events.  The purpose of this trip specifically was Max Payne 3.  The event culminated on Saturday evening, where we were taken to a building that on the inside was made to look like an abandoned warehouse in which a gunfight had recently taken place.  There were spent bullet casings littered throughout the venue, which I thought was a very nice touch.  I had some time with the Xbox 360 version first, which you can read about by heading over to this article that I wrote for TeamXbox.  However, here I would like to explain my experience with the PC version as well, so let’s get right to it!

I will start from the onset and let you know that the PCs that we were playing on were basically super-computers.  I suspect that every time I fired a bullet in-game the lights illuminating the Statue of Liberty not far away flickered, ever so slightly.  However, I spoke to one of the Rockstar reps up in the PC loft in the warehouse, and they assured me that this is a game that can scale to differing computers very well.  So fear not on that end of things.  That said, you will notice a trend as I speak about the game here – and that is that the PC version of Max Payne 3 is the definitive version.  Don’t get me wrong – the Xbox 360 version is amazing, and does on that console what few other games have ever even attempted.  But simply put, PC is king for Max Payne 3.  This could partially be because I played Max Payne 1 and 2 on the PC as well, so it’s in my frame of reference for this to naturally be a PC game.  But let’s talk now about some concrete examples of what I mean.

The first and most obvious example of this difference is graphically-speaking.  Now, it’s no new thing that PC games tend to look better than their console counterparts if you have a rig that can max out the settings (no pun intended, I swear).  However, the Xbox 360 version is no slouch, as I mentioned in my other article.  It’s one of the most visually-impressive games that I have seen on the system.  But oh man, what a difference the PC processing power makes!  Going from 360 to PC was like putting on a pair of glasses for the first time when you didn’t even realize your vision had started to fail.  Everything is so smooth, the frame-rate is locked-in and the game just runs like butter.  It is on the PC that you find the true benefits of all of the cutscenes being rendered in the game engine.  You expect to see a loading screen after the cutscene and when Max just runs out of the door and you see the health bar appear in the lower right and the targeting reticule pop up you’re reminded once again that as amazing as the game looked in a cutscene, that’s EXACTLY how it looks while you’re playing as well.  Kudos to you on this, Rockstar.  Especially given that you are usually later to release PC versions of your games (or not at all – where’s the PC version of Red Dead Redemption?!), it is nice to see that you’re releasing the PC version of MP3 so close to the console release.
In terms of control, hands-down the victor here is the PC version.  While the Xbox 360 version was tough and I noticed over time my aim was improving, I felt like I’d been playing the game for weeks already when I got my hands on a mouse and keyboard.  The whole flow of the game just naturally speaks to using a mouse to get a bullet exactly where you want it to go, whether that be between the eyes, in a knee cap, straight to the heart or, if you’re like me and still find this funny, straight to a baddie’s crotch.  He’ll be singing soprano the rest of his life, for sure.  My point in all of this is that it’s much easier to put things exactly where you want them to be with a mouse versus a controller.  And with that, utilizing bullet time and shootdodging around the levels becomes just a thing of beauty.  In a nightclub level that we got a chance to play (that up to this point hadn’t been shown to anyone outside of Rockstar prior), I took a dive off the DJ booth in one area, engaged bullet time, aimed to the left at two guys and took them out, then still had time to sweep to the right and put one in the throat of another thug before landing on the bar and rolling off behind it into cover just as reinforcements arrived at the other end of the room.  You simply don’t get experiences like this in other games. 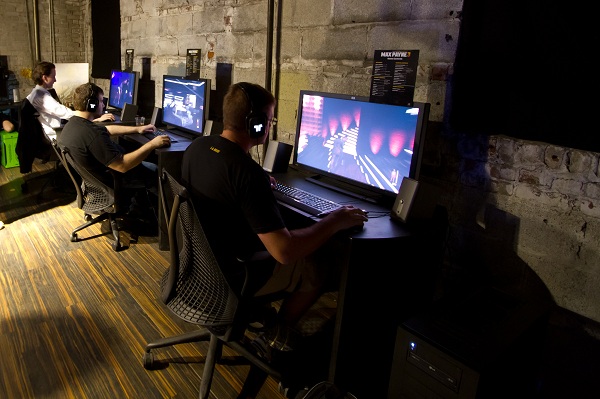 At another point in the football stadium level in Sao Paolo I was tasked with utilizing my sniper rifle skills to protect Raul Passos, Max’s partner-in-crime, while he was running away unarmed from some very well-kitted soldiers.  There was a very satisfying feeling seeing Raul duck under a row of chairs, machine-gun fire shredding the plastic seats all around him, and with the squeeze of the trigger enabling him to make it just the littlest bit further towards safety.  It was only at the end of this sequence of events that I realized I was holding my breath for most of my shots.  If you want to talk about a game that is immersive and really gets you into it, look no further.

I would have liked to have gotten a chance to play multiplayer with the PC version as I did with the 360, but it was understandable that it wasn’t possible given that there were only three machines so it would not have been much of an experience.  However, I can say that it will be a pleasure to do so when I pick up my PC copy of this game.  I can only imagine how much more satisfying it will be to play a Gang War match with a control scheme that makes more sense to me.  These Gang War matches are incredible, too.  The way that you go through five scenarios per game, and the outcome of the prior scenario dictates the rules and modifiers for the next scenario, is impressive to say the least.  I got a chance to play this once or twice, and even after ultimately losing the match as a whole I still felt a sense of accomplishment.  It isn’t as robust, say, as the storyline campaign or anything, but there is enough of a narrative in place here that you’ll stick with it for a long time to come if you even like multiplayer gaming a little bit.  I’m not really a huge multiplayer gamer myself, but I know that I will likely spend a lot of time doing it with Max Payne 3.

So to sum things up, Max Payne 3 is an amazing game, no matter what method you will use to play it.  In my opinion, the PC version has an edge over the consoles, but that should not prevent you from being able to enjoy what is sure to be one of the best games that will come out this year, by far.  I usually stray away from making bold claims like this, but I can say that this is going to be a very strong contender for Game of the Year this year.

Many thanks to Rockstar for a fantastic weekend, and once again a special shout-out to my fellow website friends.  It’s always a pleasure to hang out with you all.  See you real soon, I hope.