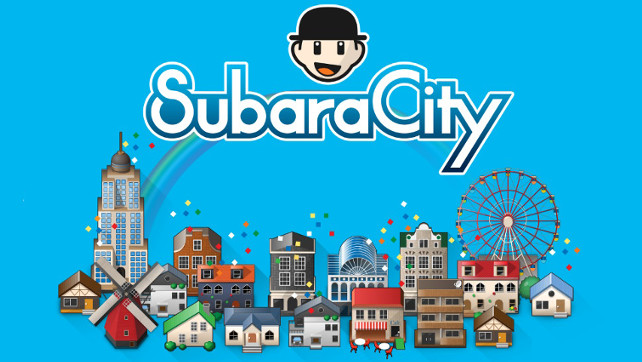 SubaraCity is a city-making puzzle game, giving a fresh spin on the block-matching genre. It’s simple to play and addictive, but needs a little more variety of play.

The game has the same concept as many match-three puzzle games, however in the game you can also match just two adjacent tiles. The goal of the game isn’t to pass a level, but build the largest city you can. 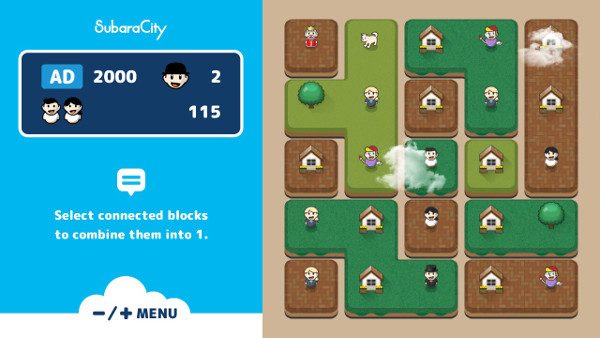 Each of the coloured tiles (three different ones in casual and four colours in normal mode) represent the population of a city. At first the population is low, but as you connect like-coloured tiles they will build up to a denser building. This will grow your “population” and build your score. When you consolidate onto a single plot, other coloured tiles will drop from the top of the screen. You repeat this step to keep building up your city.

Once you connect enough tiles tiles to reach a level 10 space, they will turn into a special building which will be a white. These white tiles can only be joined with another white tile, however once you join white tiles together into gold plots they can’t be joined again.

The game is pretty relaxing and has feels very zen, especially when playing with the relaxing music in the background. As someone who has a lot of fun with city building I easily got lost playing the game. 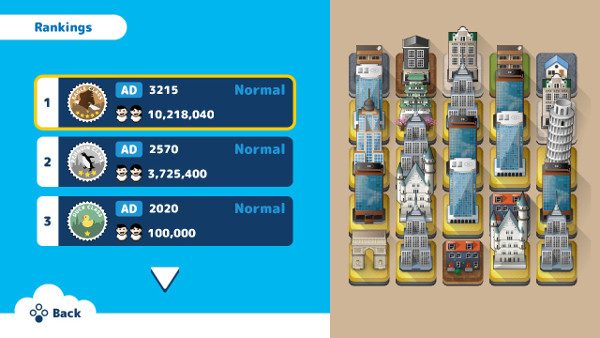 The game can be played with either the buttons or the touchscreen. It can also be played either on the TV with a controller, tabletop mode or in portable mode.

While you can customize what some of the tile buildings look like, it would have been nice to have a little more customization. Perhaps entire themes based off of different regions with accompanying music. There is also a lack of multiplayer, online, or something in the vein of a time-attack mode.

While the game is pretty light on the extras, SubaraCity only $5 USD in the Nintendo eShop so it’s a good game to pick up if you want to pass the time with a relaxing match game.