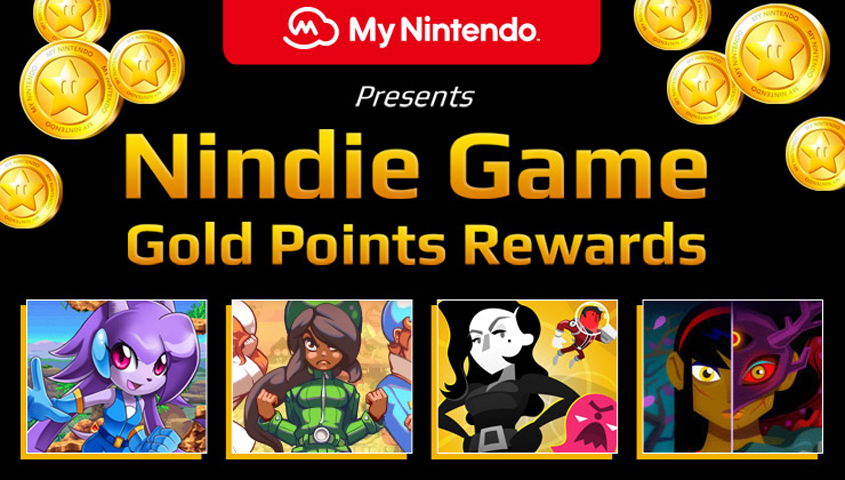 Nintendo users can redeem their Gold Points for some of the great indie games on Nintendo platforms. Four Nindie games have been added as Gold Points rewards on My Nintendo, three for 3DS and one for Wii U

Runbow Pocket (New Nintendo 3DS)
Developer: 13AM Studios – 110 Gold Points
Runbow Pocket is a fast, frantic game where you can conquer over 145 levels in Adventure and The Bowhemoth, or go head to head in Run, Arena, and King of the Hill online. The world changes with each swipe of colour, so you’ll have to stay on your toes as platforms and obstacles disappear.

Noitu Love: Devolution (Nintendo 3DS)
Developer: MP2 Games – 80 Gold Points
”Noitu Love: Devolution” stars Xoda Rap – the new Peacekeepers prodigy – who has to protect the city from the onslaught of the evil Darn horde, thought to have been vanquished a hundred years ago! But this time, they bring with them more than just their grins, as the city is bending and deforming into different times and places! What could be going on? Use Parental Controls to restrict 3D mode for children 6 and under.

Severed (Nintendo 3DS)
Developer: Drinkbox – 110 Gold Points
Take control of a one-armed warrior named Sasha, wielding a living sword on her journey through a nightmare world in search of her family. Swipe-based touch controls will let you solve puzzles, find secrets, and do battle with a host of disturbing monsters. As the journey goes on, you’ll unlock abilities, ascend an RPG-style upgrade tree, and tease apart the mysteries of the dark fantasy universe Sasha finds herself in.

Freedom Planet (Wii U)
Developer: Galaxy Trail – 110 Gold Points
Fight your way across the celestial world of Avalice where cats are green, motorcycles drive up walls and monster girls do most of the buttkicking! Freedom Planet is a cartoony, combat-based platform adventure that pits a spunky dragonoid and her friends against an alien attack force.