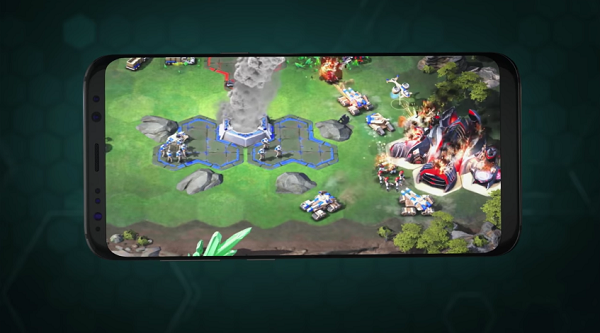 During the EA Play Pre-E3 press conference a former RTS mainstay made its return in the form of Command & Conquer: Rivals – A presumably Free to Play title similar to Clash of Clans and other action hybrid titles.

Longtime staples of the genre like resource collection and unit production are still present in this scaled down, e-sports focus take on Real time Strategy. Two players square off against each other on a small map to claim a central point and launch a pair of nukes at their opponents to claim victory. Several iconic units from C&C history did make an appearance in Rivals brief appearance on EA’s stage – groups of marines, the mammoth tank, tiberium harvesters and flamethrower units were all accounted for.

No word on how Command & Conquer: Rivals will be monetized and the game is still in pre-alpha. North American Google Android users can head on over to the Play Store and pre-register for access to the pre-alpha release. An iOS release is set to follow sometime later this summer.

EA’s last attempt at reviving the long dormant Command & Conquer franchise happened half a decade ago, all the way back in 2013. Originally announced as “C&C: Generals 2”, 2013’s cancelled entry was focused entirely on multiplayer and was cancelled soon after a closed alpha test concluded.