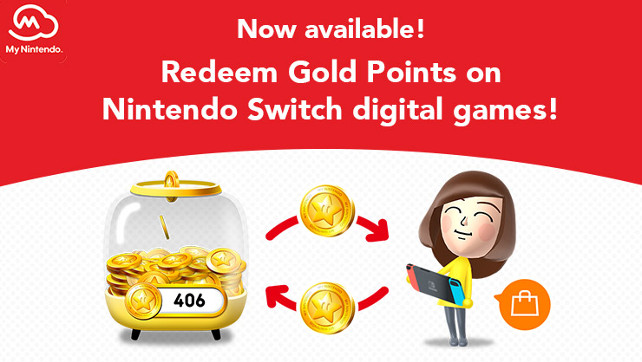 It took a year but My Nintendo members can now redeem Gold Points for digital games and DLC for the Nintendo Switch.

Redeem those points on your next eligible digital purchase (including games and DLC) for the Nintendo Switch system. Just look for the option to apply your points during checkout.

According to the Nintendo release, if you buy a $59.99 game on Nintendo eShop, you’ll earn 300 Gold Points. Those points can then be redeemed for $3 toward your next purchase, which will earn more Gold Points, according to the amount you paid (excluding any points or discounts used). So 1 gold point is equal to 1 cent (CAD).

With the addition of Nintendo Switch to the My Nintendo program, Nintendo has made some changes. Previously called “Platinum coins” and “Gold coins,” the value of the revised points has changed. Previously the Gold Coins earned were in tiers. When I purchased Pokémon Silver in the Nintendo eShop ($12.89 CAD) I earned just 10 Gold Coins. Making the same purchase now would now earn “up to 64 Gold Points.”

Overall this does seem like a good change and the arrival of My Nintendo on Nintendo Switch is definitely a great thing.