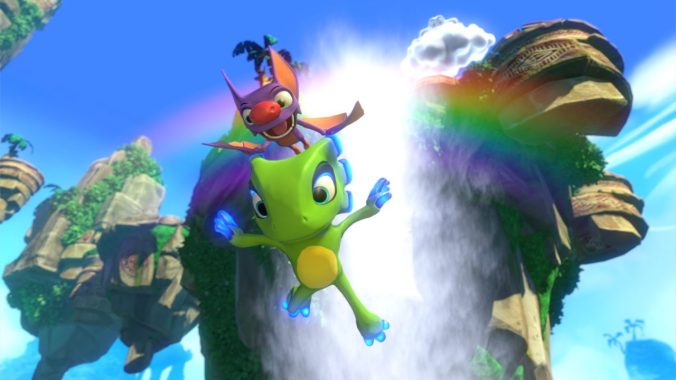 *insert cute cartoonish animal noises for the remainder of this post*

Playtonic’s throwback to the Rareware platformers of the N64 era, Yooka-Laylee, is now available on Nintendo Switch.  Cartoony and cute animals pairing up to take down a big baddie in a colorful world was once a winning formula for the Nintendo and Rare. Two decades later, the unlikely pairing of a chameleon and bat pick up the mantle left behind by Banjo and Kazooie to fill the 3D platforming void.

Featuring seven explorable worlds, fifteen unique special moves and tons of collectables, there is a lot to do in this retro platformer.  The Switch port may have taken an additional eight months to complete (PS4 / Xbox One version was released in April of this year) but the wait has been worth it. Rather than contract out the Nintendo Switch version to an external team, Playtonic themselves handled the port and created custom assets that better suit the Switch’s hardware profile.  In the end Switch get a version of Yooka-Laylee that clocks in at just over 5GB and runs at 630p while in handheld mode. While docked Yooka-Laylee runs at a solid 900p.

Yooka-Laylee is priced at $50.31CDN for a digital version on the Nintendo E-Shop. Team-17, the game’s publisher, provided us with a review copy for Switch. Look forward to a review after the holiday break.