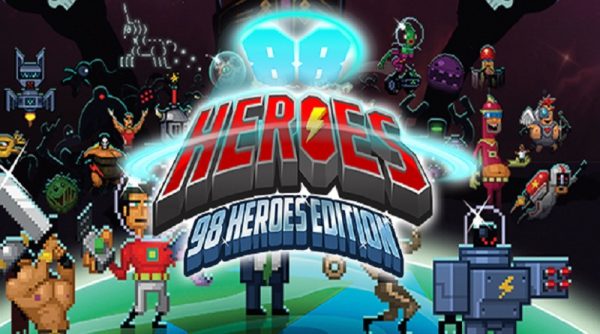 On August 8th, 1988 at 8:08 am I was but an infant when one of the most terrible acts of evil was attempted. Doctor Evil H8 almost had destroyed the world unless he was delivered his demand of .$88 octillion with a deadline of only 88 minutes! In order to save mankind from destruction by nuclear warhead, we needed the help of the brave, the bold, and the silly 88 heroes! This is the set up for developer, Bitmap Bureau’s, game “88 Heroes”. Now this game, published by Rising Star Games has come to the Nintendo Switch with some interesting challenges to add to an already interesting game. 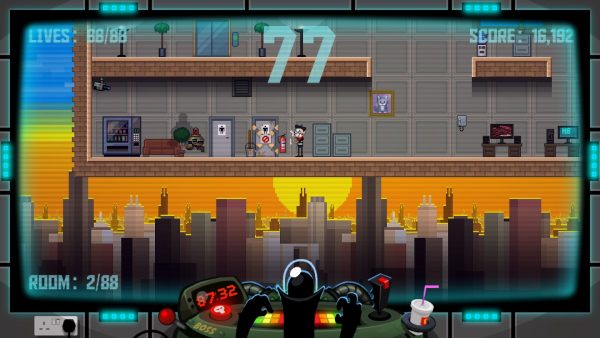 The main game is a chaotic 2D platformer, with emphasis on the chaotic. You are given a random hero to make it through a level in 88 seconds. These heroes are what make the game different from other indie platformers like it. Some heroes possess great powers or weapons that can help annihilate enemies such as Laser Kittie who can shoot across a level with their laser or Hammerstein who can literally break through floors which can literally open opportunities to shorten your time getting through a level. Some heroes, however, are less than impressive such as Hard Hat Harriot who has an impressive jackhammer, but does nothing with it and has no impressive abilities or Wang Wei the panda on a unicycle who does nothing except the somewhat amusing trick of riding backwards which means an added annoyance for the player who would need to change how they control a hero in order to progress in the level. 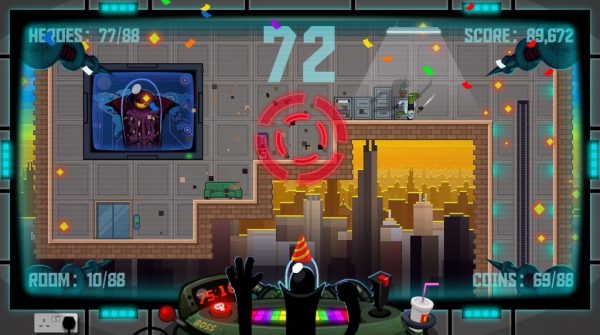 If you lose a hero during a level either through death or time running out, that’s no problem at all! Another hero can take its place immediately and might even be better for the situation at hand. You have 88 chances to get through 88 levels and most of them will get you frustrated and groaning as you figure out how to get past traps, what awaits you around every corner and what types of heroes will help you succeed. If you get a hero you don’t want to use or won’t help you, you can “deton8” your hero and move on to the next if you wish, but I find there is literally no point in not at least trying to get past a level without blowing up your hero and losing one of your 88 lives anyway.  Along with a way to destroy your hero, you can also gain a hero back if you collect $88 worth of coins and picking one to be “reborn”. My favorite hero, personally, was Ms. Fortune simply for her gimmick. You can make her flip a coin and depending on the outcome she will either get you to the end of a level or die instantly. Most of the times, the heroes gave me a smirk or an amused groan usually due to a pun or silly pop culture references.If you need more of a challenge, there is always the magnificent 8 mode which lets you only chose 8 heroes to get through 88 levels with. 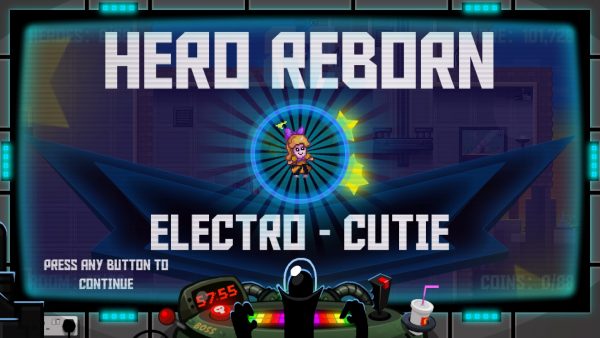 Overall, aside from a few frame rate issues that I didn’t experience almost at all, the game is a solid 2D platformer indie game. The Switch looks like it quite the console for indie games and this game is a fun addition. At the price of $30, I might recommend waiting for a sale for this game, but if you are craving a fun, lighthearted platformer, support an indie developer with a solid product and enjoy.