During the GameStop Expo in Las Vegas, Nintendo announced a special edition of the Fire Emblem Warriors game for the Nintendo Switch system. The special edition will be available this fall in the Americas, and will come with a variety of items.

“The incredible fans of the Fire Emblem and Pokémon franchises not only love the games themselves, but also the features behind the games,” said Doug Bowser, Nintendo of America’s Senior Vice President of Sales and Marketing. “These special versions are great options for dedicated fans who want to enjoy all facets of their favorite series, from amazing gameplay to bonus artwork.”

The Fire Emblem Warriors Special Edition comes with the Nintendo Switch game, plus three CDs with music from the game. Fans also will receive character art cards on 5-by-7-inch premium card stock, and a slip case to hold the cards. 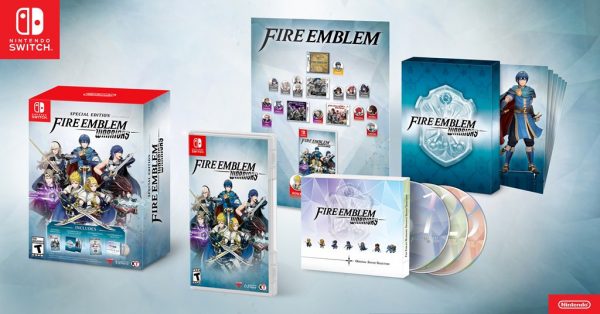 Finally, the special edition will come with a dual-sided poster showing the first Fire Emblem games the characters appeared in. One side of the poster will be in English, while the other will be in Japanese.

The special edition for Nintendo Switch goes on sale October 20th at a suggested retail price of $79.99 USD, the same day the game launches for the Nintendo Switch and New Nintendo 3DS.