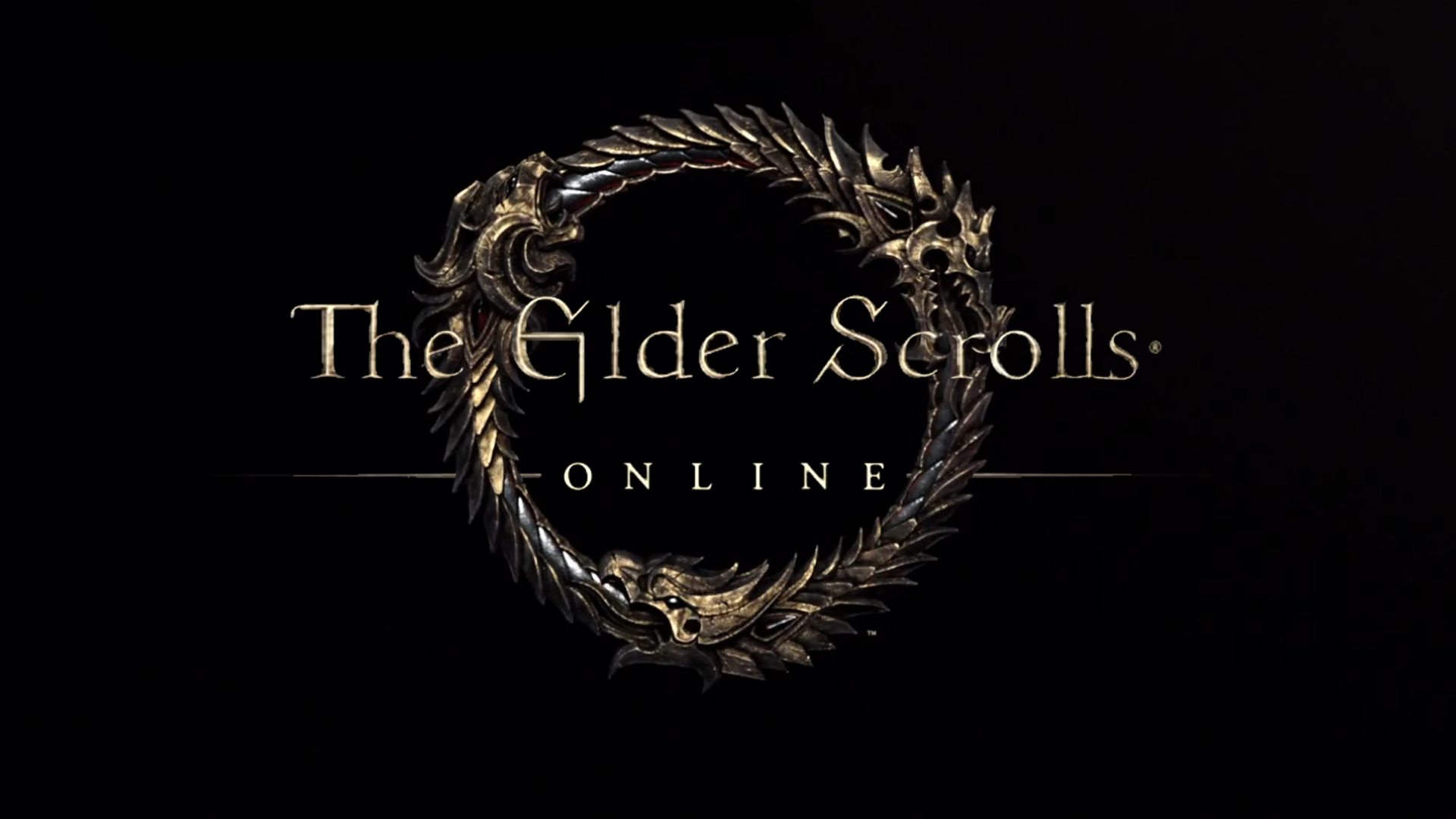 The Elder Scrolls series has always provided players with more content than your average roleplaying game, let alone other open world titles. Some players swear by them as the pinnacle of immersive interactive entertainment and when Zenimax Online Studios brought the world of Tamriel into the online space as a persistent world filled with a number of provinces and full voice acting, the game sort of passed me by.  Now three years later, after a number of substantial patches, a monetization change to buy-to-play and on the eve of an expansion launch I’m ready to recount my first 60 hours with The Elder Scrolls Online: Tamriel Unlimited.

The Elder Scrolls Online is Zenimax Online Studio’s first major release and an attempt to bring the world of Tamriel into the MMO-genre, striking a balance between familiar genre staples and the distinct Elder Scrolls flavor that Bethesda lovingly crafts into the main series game.  While ESO is distinctly Elder Scrolls in presentation, it is only partially so in terms of gameplay mechanics as there are a number of mechanics and activities present within ESO that would never be introduced into Bethesda’s single player sandboxes. Conversely, this also means that some mechanics that players may be looking forward to in the offline games are missing from ESO because they either wouldn’t make much sense in a shared persistence space or would presumably detract from the flow of gameplay.

ESO brings together ten openly available provinces for all players to explore, quest, queue and craft into their heart’s content. As a citizen of Tamriel, the player takes on the role of an adventurer who can come and go as she wishes – taking quests from NPCs, exploring public dungeons alone or with friends or completing the Main Story Quest line.  So far this should be familiar to Elder Scrolls fans once you’ve completing the mandatory tutorial section of the game ESO provides you with an unprecedented amount of freedom and with the “One Tamriel Update” from a couple of years ago you can now pretty much teleport in any of the provinces that you have access too and start enjoying content right away. Aside from deliberately entering a Cyrodil PVP campaign, entering a full party dungeon alone or agro-ing three or more mobs deaths in ESO are fairly rare. Players of previous games may also find that the ability to just run up and murder any NPC has been omitted from ESO without the Dark Brotherhood add-on and even with it the ability to wreck havoc among the population is severely limited when compared to previous games. I view this, like the omission of 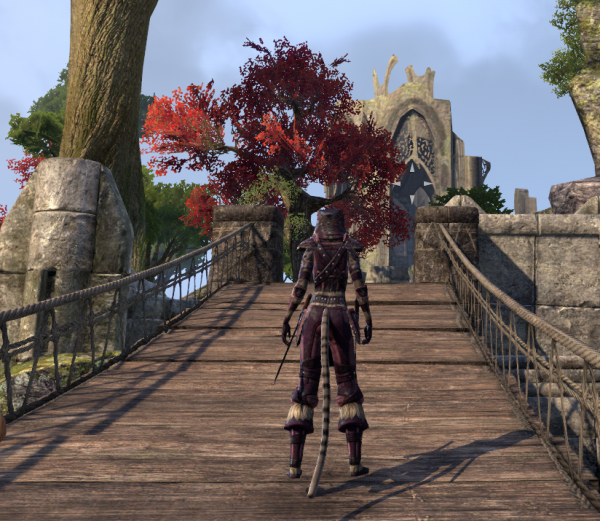 Players of previous Elder Scrolls titles will feel right at home during combat in Zenimax’s MMORPG. Characters are able to equip up to two primary weapons if they take the dual wielding skill line, a sword & shield, a two-handed broadsword, a selection of axes and daggers or magical staffs if they are so inclined. Combat is still strictly action focused with your left mouse button swinging your weapon in real-time and WASD acting enabling the player character to roll & dodge in several different directions. Your right mouse button on PC will act as your block or shield if one is equipped.

All of this being said, ESO differs from older Elder Scrolls titles in three key areas when it comes to combat:

Readers of any of my previous MMORPG coverage should know that I’m a huge dork when it comes to the world and backstory involved in any online game that’s going to consume a large amount of my time. Previously my Final Fantasy XIV character, Reka Ai’a, was named with the proper Miquo’te naming conventions in mind and my ESO avatar also complies with the naming conventions for her world. Sticking with my experience with Oblivion and Skyrim I chose the bipedal cat race Kajhiit and “Nightblade” as my class (more on this in a moment). This despite the fact that I told my wife I totally wasn’t going to play the sneaky assassin this go around (Kjahiit get a natural bonus to sneaking and Nightblade is an assassin spec). Also humorlessly, following my races naming convention I named my character “Dhar’Aia”, with the prefix meaning “nimble fingers” (yet another thief reference) but also sounds like Daria, so yay 90s references?

After completing the tutorial and setting up the events of the Main Story Quest (which honestly I didn’t find all that engaging so for the majority of my review time I looked for side quests and side activities) I spent time on the island of Auridon. This island is about twice as large as the tutorial island and is absolutely packed with interesting side quests, towns, dungeons, delves and dark anchor spawn points that are sure to keep even the most content starved adventurer coming back for more. In a total of the 60 hours I played over the past couple of weeks, 50 of them were spent on Auridon alone. 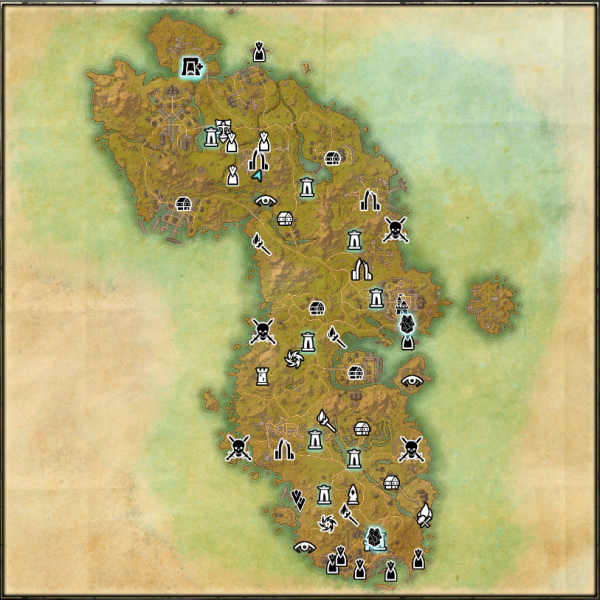 Auridon was an interesting place to explore – politically it is a monarchy with a newly sworn in queen who does not really hold the island’s traditions in the highest regard. From the beginning of Auridon’s side quests, it is clear that Queen Ayrrenn of the high elves doesn’t care much for the particulars of royal life and given the fact that she was a warrior before taking the throne, this outlook makes sense.  Things only become more mysterious as I explored an entire town that had been turned to stone in The Silent Town quest line or helped to investigate why the residents of one particular settlement were literally becoming the living dead in the Plague of Phaer quest chain.  The morality of magic and the nature of allegiances are at the heart of a lot of Auridon’s available quests. Some of them connected into Queen Aryrren’s quest line while others simply helped broaden the world. After 50 hours I had only completed about half of the island’s available 40 quests but it was enough for me to get a clear picture of just what type of place Auridon was.

If gathering or crafting is more your thing the provinces in The Elder Scrolls Online offers a bevy of systems for everyone from the inexperienced crafter to the expert. Crafting simple items like swords, shields, and pieces of armor is intuitive enough: simply go to the particular crafting station and the UI will tell you how many of each material you need for any of the recipes you may have learned. Your character doesn’t automatically unlock every possible item and permutation, you’ve got to earn them. This means either buying recipes off the private Guild Stores (more about those in a future ESO related article) or finding them as random drops within dungeons.  Once you’ve learned a recipe the game will let you know all of its effects, whether or not a crafted item is better than your current gear and any bonuses. Lower level recipes can be purchased from NPCs but uncommon (green) or rare (blue) quality recipes can only be found by exploring dungeons or delves.

Wrapping It All Up For Now

The Elder Scrolls Online: Tamriel Unlimited is absolutely massive game that contains a lot more content than I initially anticipated. Rather than do a review in progress I’m going to divide my full review of the game and its’ DLC into a number of articles with this article reviewing the core systems, combat and my initial impressions of my first 50 hours. Throughout the coming weeks I will focus on one DLC pack per future review while fleshing out my thoughts on parts of ESO that I couldn’t cover in this already lengthy review. Please look forward to my thoughts on the crafting system, delves, dungeon design, skill system and more in addition to in depth write ups about the Imperial City DLC, Wrathgar DLC, Cyrodil PVP zone and of course the recently launched Morrowind expansion. Fully exploring the world of Tamriel is going to be a massive undertaking that could take 100s of hours potentially.

If you’re looking to dive into an immersive MMORPG without a subscription fee that can provide you enough content to fill several AAA titles, The Elder Scrolls Online: Tamriel Unlimited is a must have.  ESO is available for Windows PC, Xbox One and PlayStation 4.

Bethesda Softworks LLC provided BrokenJoysticks.net with vouchers for The Elder Scrolls Online’s DLC add-ons in addition to the Morrowind Expansion. The reviewer paid for her own base copy of the game, any subscription time and optional microtransactions.