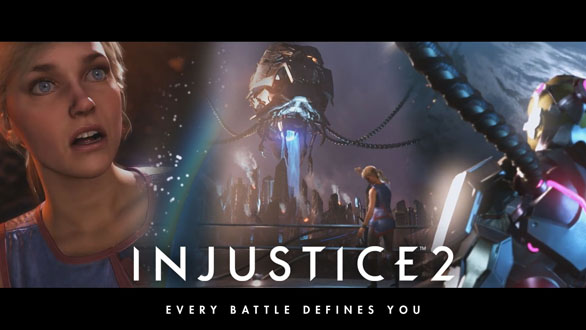 The original Injustice was a fresh idea based around the expanded mechanics of the Mortal Kombat franchise. Adding things such as environmental objects in the background to interact with and scene transitions you could knock your opponent into for extra damage, it had an different feel. Let alone the storyline was incredible, featuring a world where Superman was fed up with villainy and Batman was struggling to keep the peace through justice and mercy.

What felt great back in 2013 has since been given a lot of polish with the sequel. Everything just feels better, and it should since the original was released on last gen consoles. You don’t really notice just how much of a difference it is until you get into seeing the game in action. Facial animations and frame rate are fantastic! Everything has a cinematic feel to it and that really makes Injustice 2 a treat to play!

Story mode will last you around 7 to 8 hours to complete your first time and then some extra to replay some fights as the opposite character when you have a choice. There’s some additional content after that was well but the main game does give a lot. There are even some impressive blocks of that time that you’ll be enjoying lengthy cinematics that flesh out the new story focused on Brainiac taking on Earth. 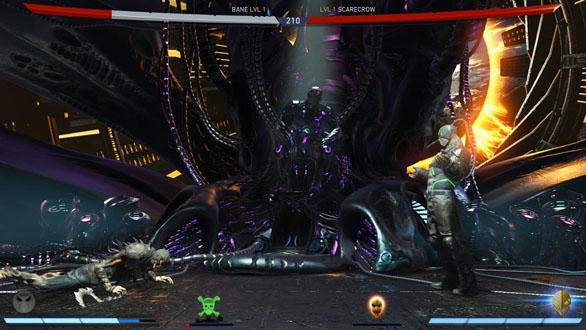 NetherRealm Studios has gone the extra mile this time to add in collectables to keep players busy even after the story is complete. With the massive roster of characters, you’ll have a lot of goodies to earn with the new gear system included with Injustice 2. To begin with, all of your characters earn experience points and level up. This helps to make them stronger and even improve their hit points. It seems level 20 is the max, but you can also earn gear along the way to continue to improve your characters.

Gear overall can be just enough of a boost to give you the advantage you need in tougher battles. Customizing your characters even allows for additional moves to be added and even shaders to change up their color scheme. The equipment that you’ll unlock throughout the story, but mostly in the new multiverse mode, allows you to change the look of your character as well! Each piece can add a unique look to your favorite fighters. The gear system is quite deep too, allowing you to transmog gear to your favorite looks, unlock loot boxes you’ll earn after combat, and of course improve the stats of your combatants.

All of this sounds like a small adjustment to Injustice’s formula, but it really does open up a lot more to keep you playing. Some of the pieces you’ll unlock may seem similar, but I’m sure there are hardcore DC fans out there that are thrilled with the specific pieces found in loot boxes. I’ve mainly been playing Supergirl and Scarecrow and I’m happy with the mix of gear I’ve earned. The down side is that loot box drops are randomly spread across the large roster of characters, not just for your current fighter. However, I’m pretty sure after a few losses in multiverse I did get a pity gear drop to help improve the character I was playing as and give me a boost. 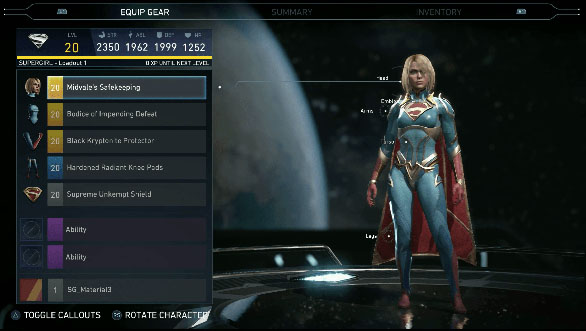 Multiverse is the bread and butter of the game, even though the story mode is both fun and worthwhile. It should be noted that experience earned in the story mode does actually affect your characters. So it isn’t a completely separate experience. I did dive directly into multiverse with the promise of unique timelines that would give me various rewards. The game does indeed have multiverses that last for a short period of time, some only a few hours. It seems there will be unique gear that you’ll only be able to earn in this mode as well.

The multiverse mode also switches up your opponents gear. They’re from an alternate universe after all! So while you may be used to the typical Harley Quinn from the story mode, multiverse could pit you against a different version looking of her. This is a nice way to see some different gear, and to keep things interesting instead of fighting the exact same looking characters over and over. Each multiverse can sometimes have multiple towers to fight through. Similar to the combat tower setup of previous Mortal Kombat games. Complete the tower, and maybe some challenges along the way, and you’ll earn whatever loot is promised in that towers description. 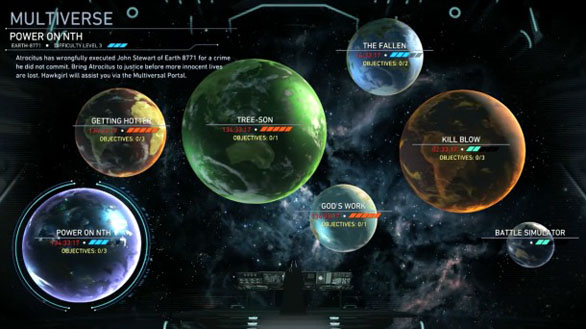 Most importantly, Injustice 2 is fun. It takes the winning formula of the first game, makes it shiny and new, then gives you content to stick around for. There are new characters such as Scarecrow, Swamp Thing, Blue Beetle, and Firestorm that mix it up with different styles and new moves. I personally found Scarecrow to be very easy for me to get into and he almost felt like a Killer Instinct character with how naturally combos seemed to flow. He’s also voiced by Robert Englund! How cool is that? With each character having separate leveling stats, you’ll have a ton of battles to continue through to power them up. Alternatively some of the in game currency can be used to instantly boost others to level 20 after you max out someone else. There is some gear that boosts your experience point gain as well.

If that wasn’t enough to keep you playing, Injustice 2 even adds guilds to the mix to earn even more loot. This emphasis on collectibles and community really makes the game so much easier to pick back up and play for short sessions. You always feel like you’re making progress. The first Injustice was great, but the sequel steps things up and makes the franchise modern in every way. You can even tie in the mobile version to earn even more goodies! 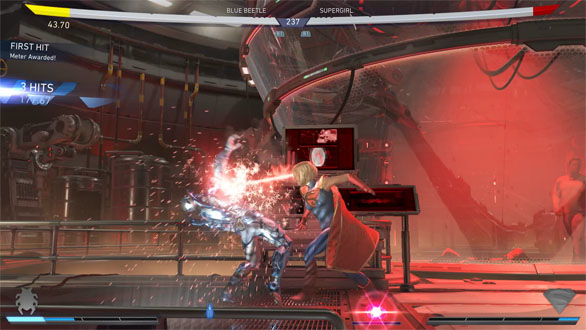 The only issue I had that still persists is knowing when to interact with background objects. They do have a glow around them when you’re near them, but there has been the odd time that I’ll still think I’m in range and instead my fighter just won’t react. In later story mode and higher difficulties those kind of miscalculations can be very costly. Maybe it’s me, I’ll admit. I might not have a good grasp on the timing. Fighting otherwise flows very well and I found myself being able to get inside my opponents defenses and take the offensive to counter their current stance. This is the evolution of the Mortal Kombat fighting system and it feels crisp and responsive most of the time.

Injustice 2 is easy to recommend. Casual players will get a lot out of the story and probably messing around with multiverse. Fight game and DC fans will easily get caught up in those same modes for the long term. It’s just a quality game, through and through. Fight against the multiverse, fight online, or conquer the story mode! The latest NetherRealms game is here and it’s a blast!