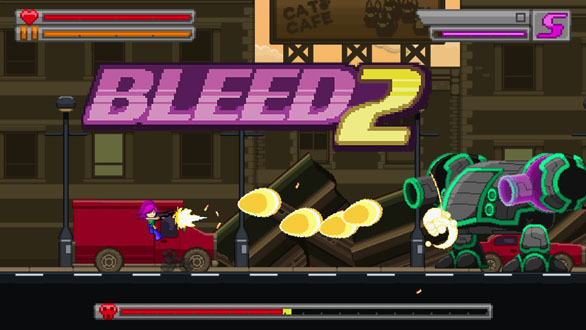 If you haven’t played Bleed, you’ve really missed out on some indie game magic. With solid controls, slowing time mechanics, and free aim shooting it’s a wild ride! Bleed 2 looks to be even more of that action with lots of improvements. Of course we’ll be covering the game with a review coming up soon and hopefully I’ll get some video on the go as well!

Take on the role of Wryn, the worlds greatest (and only remaining) hero! With an invading force of villains to battle, she’s ready to yet again take on anything they can throw at her. Wryn’s ability to slow time, air-dodge, and free aim really creates some dizzying moments in a barrage of bullet-hell action. With new and larger set pieces, that thrill ride is just going to get even more intense in this sequel!