We’ve all seen the footage from the Nintendo Switch Reveal. Gamers have questioned just what was going to be worthwhile with this new console. Was it going to be the big new thing? Then there’s all that footage of that wacky game “Arms” with various boxing fighters with extendable arms! What in the WORLD is going on?

So today I got to check out the Nintendo Switch at a press event in downtown Toronto. Of course I was skeptical of Arms but I wanted to give it a go. If nothing else to have some video footage of myself flailing around while trying to play the game. Instead, I walked away thinking it was one of the two top games I enjoyed at the event!

No joke! I’m not being paid to say this. This isn’t some sort of ploy, it’s my personal opinion. I enjoyed Arms and it controls surprisingly well with very relaxed motions by the player. You don’t need to swing around wildly, though you can if you like. Otherwise you can play the game calm, cool, and in control of the bout.

First off, holding both the JoyCon controllers separately and attached with wrist straps is very comfortable! They’re incredibly light and comfortable. I think my wife put it best that they clearly seem to be made of plastic or the like, but they almost feel easier on your hands than you’d expect. In Arms you hold the controllers upright with the joysticks facing each other. This leaves your thumbs on top for surprisingly fitting control of the triggers and L/R buttons. These are actually used in the game to control your fighter along with motion controls. 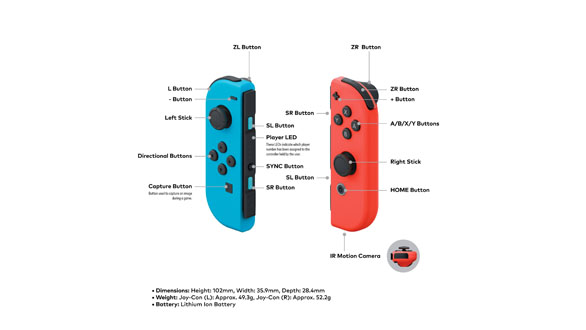 Across the games I played, I experienced the rumble of these JoyCon controllers. As I’m sure you’ve seen, Nintendo is making a push to encourage gamers to take note of how they feel. I can’t recall if Arms did indeed use them, but I’m pretty sure it did. In general, it does oddly have that feeling of the “ice cubes in a glass” sort of expression that was mentioned in the Nintendo Switch reveal trailer. It’s like there are more rumble points or what not in the controllers. With how light they are too, it makes the feeling more noticeable. The best way I can describe it is different. It’s more of a unique experience.

Arms itself is controlled by leaning the JoyCon’s in the direction you want your fighter to move. You tilt them forward, backward, or to the sides to move. Combining that with jumping by clicking the R button at the top I do believe, and the L button to dash, it gives you a good range of moment. Also by tilting the JoyCon’s at each other you can block. The best part about this is, you feel in control. Wii Boxing was fun, but at times you sort of felt out of rhythm and like you were just flailing and the game was responding to you doing something, but wasn’t always sure what. When you move in Arms, your character moves. Really, I want more games with the controls Arms uses. I could see piloting a mech with the JoyCons like this and I really liked the feeling!

Mechanica I believe was the girl I first played as, which probably helped me get that mecha feel. Punching, much like the movement controls, just feels good! You jab or twist your punch in and your character reacts. Considering your long extendable arms in the game, they sort of track the other character to land each blow, especially across the arena. I’d need more hands on time to see just how you time your punches to beat down your opponent, but things got pretty neat. At times I missed, others my punches arced around and landed right on! I don’t blame the controls for this, I blame getting used to playing the game. However, I had some pretty sweet moments. One stage I was moving to position a pillar between my fighter and their opponent. Then from there I was arcing punches AROUND that pillar to still smack at them! Of course to keep things fair after a few volleys of punches, the pillar collapsed. 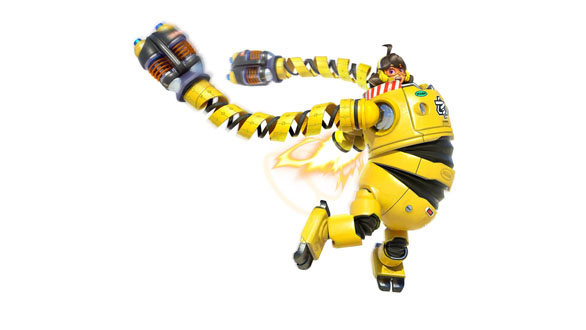 But wait, there’s more! Punching with both fists at the same time performs a grab move on your opponent. If not blocked, you pull them in and deliver a devastating wallop! A barrage of punches that land is probably just as effective, and the game does show damage numbers to indicate just how much you’re hurting your foe. However, with a grab you get in all that damage all at once if they don’t move out of your way and just let your gangly arms miss them. On top of all that you can build up a super move and unleash that with the triggers held at the same time. During this phase you can unleash a barrage of devastating punches in a row as fast as you can. Your opponent has super moves as well, so you’ll need to learn to dodge out of the way of their attacks.

Of course everyone at the event was there to make sure we had fun and the staff gave us lots of encouragement as we played our games. By the time I was making my rounds it was late in the day and everyone was pretty tired out. When I made it to the Arms display, the attendant that we got set up with was happy to show me how the game worked but was quite thrilled when we got into it. Sure, everyone wants to try out the games and just get a taste of it. It was near the end and no one was lining up so I got right into Arms. By the end our attendant was cheering me on as as struggled against Master Mummy who seemed to have two hands that almost resembled Bullet Bill’s for fists! As I tracked around the arena and managed to put some distance between us with those pillars I mentioned earlier, we were down to landing just one hit to win. My right hook went wide! Out in the open I was concerned this was game over. Then he faltered just for a moment and my left jab won the match! 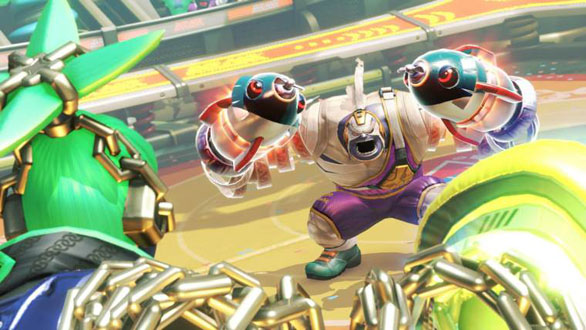 It really was satisfying. Both the quality of the game and controls, as well as genuinely seeing our attendant getting so into the game. Our experience with Arms showed me there is more to it than flailing your arms madly at the TV. Instead you really are able to come up with some plan of attack and make your fighting style your own. Want to hop in the air constantly and pummel your opponent from above? Go for it. Is staying distant so you can time their punches and scoot to the side to avoid getting hit while landing well placed jabs? You can do that too! Want to just click dash and run in, punching like mad while hoping for a good outcome? Do that too! The game really is more than just Wii Boxing for the Switch with extendable arms. Let along the charm of the characters really drew me in. I knew nothing of the robot suit piloting Mechanica but I adored her.

The big take away from all this is that I want Arms. I want to own the game. It’s a game I would play and enjoy. Sure, I don’t know much about it yet and haven’t even begun to research the title, but I enjoy the gameplay! Playing Arms on the Switch feels good, and I want to experience that again. Sure, I want games like Zelda that I can plunk my butt down on the couch and explore hours upon hours of shrines throughout Hyrule. I also want to just get into Arms and do those over exaggerated movements that aren’t needed but just feel so good because the game reacts so well to my motions. It’s cool to see the evolution of motion controls, the comfort of the Nintendo Switch JoyCons, and most of all another new IP from Nintendo that I genuinely want to play! 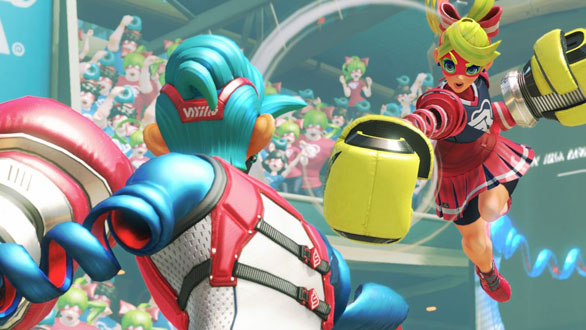 Nintendo gave me a ton of options today to play anything I wanted. I’m glad I decided to give that silly stretchy arms title a chance. It made a lasting impression and showed off the Nintendo Switch very well!