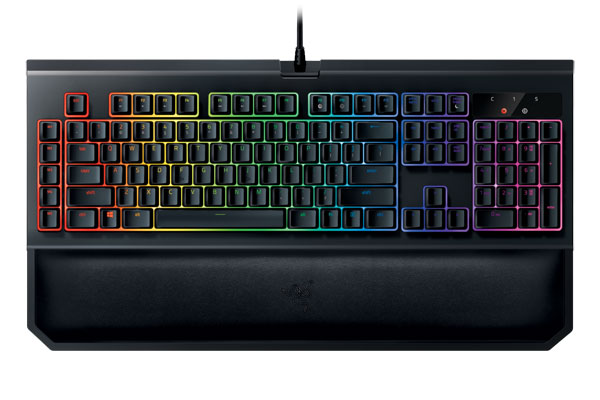 Peripheral manufacturer Razer has announced the successor to their very success BlackWidow Chroma keyboard with the introduction of the aptly named BlackWidow Chroma V2, which will replace the original at retail. This improved keyboard brings with it some smaller improvements that may entice existing owners to upgrade as well as one larger one – a brand new line of switches underneath the keys!

In addition to the orange and green switches which were part of the original BlackWidow Chroma razer has added the brand new yellow switch option which are targeted specifically at MOBA and First Person Shooter players with their reduced travel design and much more silent key-press with compared with the other two types of available switches.  For extra comfort the BlackWidow Chroma V2 also includes a magnetic wrist cushion which looks a lot more comfortable than the plastic wrist rest that shipped with the original version.

The BlackWidow line of keyboards was originally introduced more than half a decade ago in 2010. The original Black widow Chroma was released to retail in March of 2015 and was met with several positive reviews.  Chroma technology – also featured in several Razer products like the Razerblade Stealth Laptop – allows users to light up individual keys with custom programmed patterns and when playing supported games like Overwatch and Black Ops III key functions like special abilities and reloading weapons.

BlackWidow Chroma V2 will retail for the same MSRP as the original $229.99 CDN or you could pick up the original version for a bit of savings at $199.99 CDN.