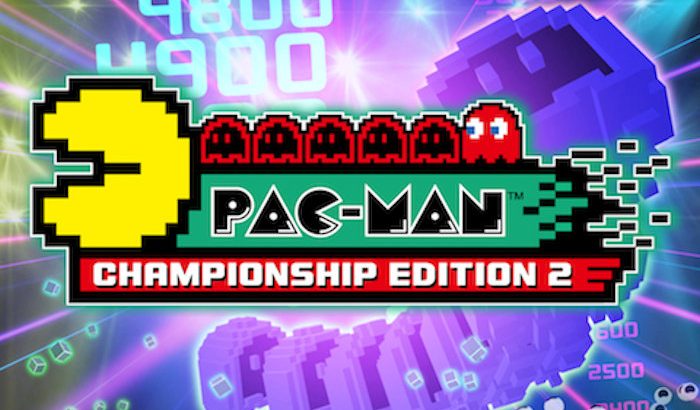 Pac-Man Championship Edition 2 follows up on its predecessors with a strange proposition. Imagine you’ve grown accustomed to driving a car without brakes. You hit other cars, you die, so you learn how to avoid doing so. You follow the road, you swerve correctly, you do fine, right? Then, one day, your car suddenly has brakes. And, when you hit other cars, it takes a couple hits before you actually crash. This would be disorienting, right? Because you’d have to completely relearn how to drive that car.

In Pac-Man Championship Edition 2, Pac-Man literally has a brake button.

Pac-Man Championship Edition 2 follows a recent tradition of modifying Pac-Man’s classic formula. Games like Pac-Man Battle Royale and Pac-Man 256 have proven that Pac-Man’s basic maze gameplay has a lot of unexplored depth, and the Championship Edition series has led the charge in showing off how interesting and unique Pac-Man can become.

As with its predecessors, Championship Edition 2 is gorgeous, with a blissful neon aesthetic and incredible techno music that will keep you going for hours of play. CE 2 takes advantage of its new position on next-gen hardware to deliver mind-bending visuals at a consistently high frame rate.

The game’s new 3D flourishes exemplify this, offering fluid animations as a new reward for skillful ghost busting. It’s not surprising that Namco’s sound team has outdone themselves, either, with clever sound effects and arguably the series’ strongest soundtrack. 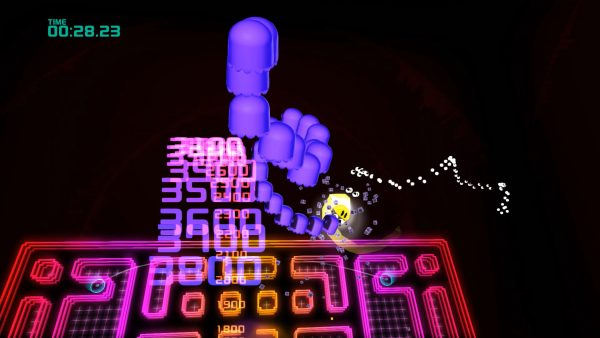 In addition, fans of previous outings will find some of their favorite songs, like Pac Rainbow, left in tact, along with some series favorite mazes like Championship I & II, Highway, and Spiral. While the aesthetics remain the same, and callbacks to previous games will make series regulars feel at home, there’s a mountain of modifications to the gameplay that might not excite everyone.

From Pac-Man Championship Edition‘s release, Namco has shown it’s not afraid of changing Pac-Man in subtle ways. In the first Championship Edition, players initially play the game at the speed of the classics, collecting pellets and regenerating the maze’s layout as they collect fruit. DX changes things up a bit by allowing you to collect a “Ghost Train” rather than having to avoid the traditional four ghosts on the map.

Pac-Man Championship Edition 2 piles on new systems in a way that isn’t as satisfying as the natural evolution and simplicity found in the older titles. Pac-Man CE 2 adds, in no short order: Angry Ghosts, Boss Ghosts, a brake button, jumping, Ghost Routes, Runaway items, several new modes, and a compulsory tutorial just to cram all this in. It’s clear that Namco doesn’t want the series’ first proper numbered sequel to feel like a gentle iteration, but all of these revisions don’t gel with the simple gameplay of the original two titles. 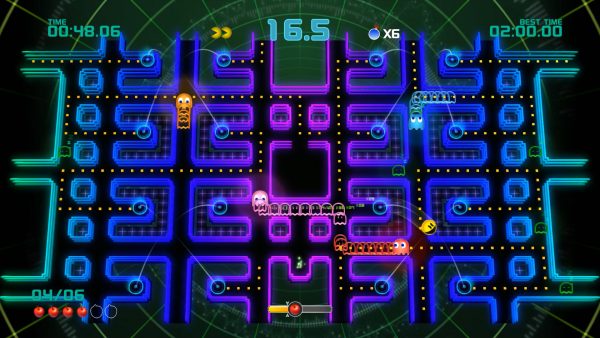 Players who were looking for a game more similar to the original Championship Edition will be left out in the cold. CE 2 will feel more familiar to DX players who are used to chasing after Ghost Trains. In 2, rather than building up speed after collecting members of Pac-Man’s Ghost Train, the player starts off at full-speed, and any ghostly minions collected become trails behind the four main ghosts, Blinky, Inky, Pinky, and Clyde.

The challenge comes from chasing pellets at full-speed while avoiding both the roaming ghosts and their new trails. It’s a race against time, as before, trying to accumulate as many points as you possibly can before time runs out. At its strongest moments, CE 2 is a fast-paced score chaser that feels reminiscent of the gameplay offered by DX with some new and interesting twists. 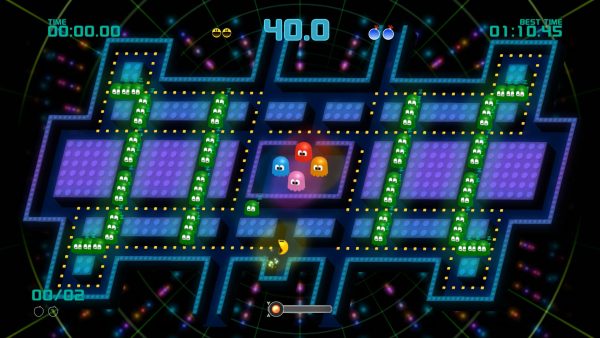 Sometimes, those twists end up tangling up in one another and bog down the gameplay with undue complication. Changes pile upon each other and lead to series regulars needing to rethink their traditional CE play.

Grinding on the wall of the maze is still there, for instance, but because of Pac-Man’s increased speed and the unpredictable new behavior of ghosts, it doesn’t feel the same, and it’s something you typically want to avoid.

When eating ghosts, instead of going after the Ghost Train behind you in a satisfying finish, you’re sent on a frustrating chase after the four ghosts and their trains along Ghost Routes, colored escape routes that require memorization and constant attention. 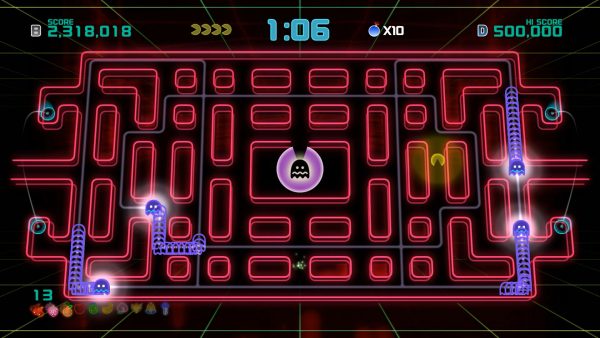 New rules constantly interrupt basic tenets of gameplay put in place by DX, and while offering something new can be fun, the amount of relearning necessary might be challenging to those who have been playing CE DX for the past six years.

If all these new details weren’t aggravating on their own, they’re paired with new modes that only serve to highlight the game’s shortfalls. As in prior outings, the game is rife with unlockables, but rather than simply mastering each maze to seek rewards, players must conquer a new mode, Adventure. Adventure fails to deliver the classic, simple fun of the traditional score attack mode, and most players will likely avoid it altogether. 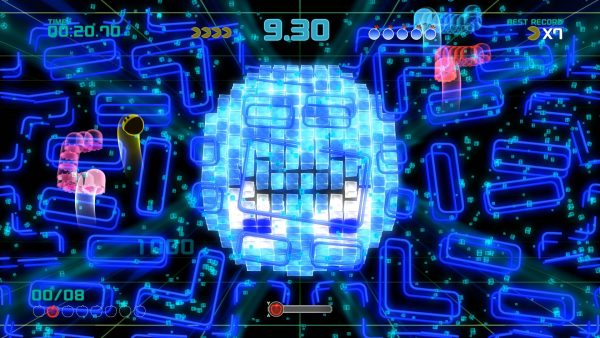 The new mode challenges players to complete several time attack missions in order to unlock Boss Battles, which are in themselves just a more challenging brand of time attack. Time attack isn’t very rewarding when failure is often found in having to battle stuff like Ghost Routes.

The process of completing stacks of time attack missions only to unlock even harder time attack missions isn’t rewarding, and if it weren’t for the promise of Galaga sprites for use within score attack, I probably wouldn’t have bothered. Within the context of 2, Adventure mode serves as an unfortunate annoyance.

By no means is Pac-Man Championship Edition 2 the weakest entry in the Pac-Man universe. At its best, Championship Edition 2 is fast and engrossing, pulling you in with engaging visuals and throbbing music. It’s a unique evolution on the classic arcade gameplay that you’d be hard-pressed to compare to its 1980 progenitor. Compared to its contemporaries, however, it lacks cohesion. At its worst, skillful play feels more like a wrestling match against new mechanics.

Pac-Man 256 and Pac-Man Championship Edition DX proved that you can iterate on the maze game formula without feeling overly complicated, without needing coercive tutorial levels, and without muddling what makes Pac-Man simple and fun to play. Mastery in titles like these is rewarded by a building sense of speed that motivates and excites.

Championship Edition 2 starts fast, stays fast, and ends with Pac-Man crashing into a wall of minions behind an Angry Ghost. If you’re ready to rethink the way you play Pac-Man, or you want to enjoy one of the best video game soundtracks this year, Pac-Man Championship Edition 2 is absolutely worth a shot, but you’d be remiss without playing stronger entries in the series first.