Home / Ambition of the Slimes | REVIEW 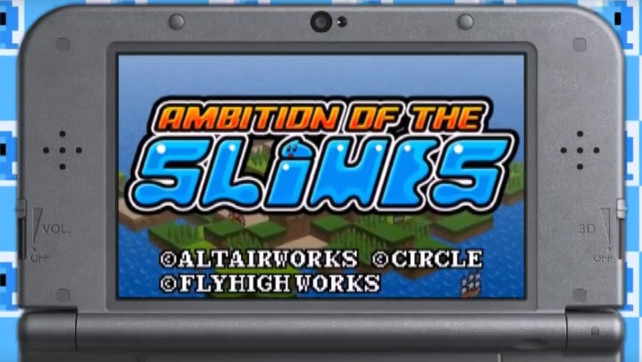 Ambition of the Slimes | REVIEW

If you’ve read any of my previous reviews for games in the genre, you’ll know that I enjoy turn based strategy role-playing games. I’ve played and loved playing games like Final Fantasy Tactics (and Final Fantasy Tactics Advance) in the past, and more recently games like Fire Emblem Fates or Mercenaries Saga 2. So when I learned that Circle was making a spin off of Witch & Hero in this genre I jumped at the chance to check it out.

Ambition of the Slimes is a great molding of the two. The game is very much a strategic role-playing game that also borrows a lot from the simplistic spirit of the Witch & Hero games. It is a very simple game to play, with a lot of the depth left out of the game. You don’t buy weapons, armour, or upgrades. But that lack of depth actually allows for an entirely different level of depth. 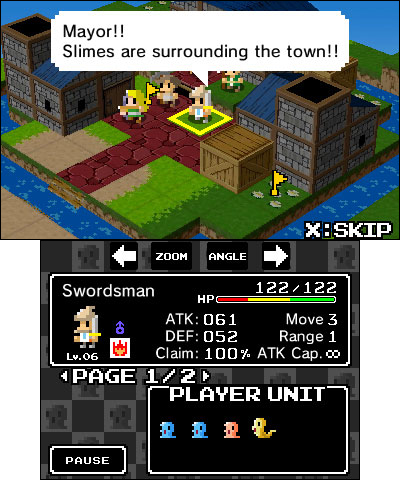 In the game you are playing as a group of slimes. That’s right, those little enemies that you’re used to fighting in role-playing games when you’re a level 1 Squire. The weak, useless slimes are all you’ve got. Except that there is a twist. While your slimes may be weak and pretty useless in battle they have a unique ability which gives you some hope. They can hop into the mouths of the humans that are trying to wipe them out and claim them. Then you take control of the enemy and use their strenghs and abilities to fight for you.

As you play through the levels and move on you’ll be approached by rogue slimes which want to join your party. And there are many different kinds of slimes with many different abilities. This is where things really get interesting and where you’ll need a strong dose of strategy to keep progressing in the game.

The different kinds of slimes have their own abilities, which vary from passive abilities like boosting the attack/defense of the human you claim, to more active abilities. Some slimes can warp to any point on the map, others can teleport another slime to any point on the map, and others still can be used to support another slime in their claim attempt. You see many of the humans have a 100% rate of success to be claimed, but others may have only a 20%, 1%, or even a 0% chance to be claimed. Some slimes have abilities to boost that chance, which can make claiming a one two punch between the slimes.

But here is where there is some strategy involved. If you move too quickly and the humans get a first attack before you can lay claim to one, then you may be out of luck. One attack can sometimes lay waste to your slime. So you may need to lure one to you so that you can claim a human before they can attack. It’s also advantageous to claim a human of the same class as your slime. 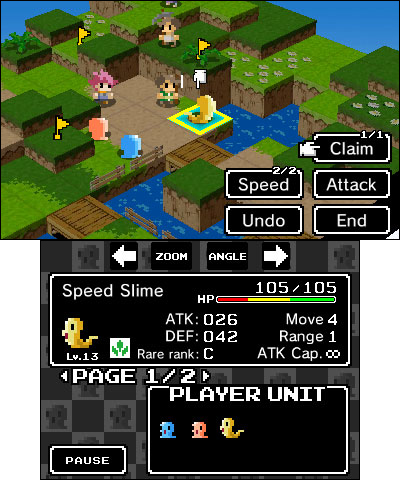 The rock-paper-scissors mechanic is used in this game.

There are three element classes to every character in the game, human and slime alike. Fire, water, and grass. A character with the water element will have a stronger attack and better defense with another who is of fire, and so on. Not only is that very important to note when you’re playing a level, but if you claim a human with a slime of the same class, the claimed character gets boosted stats. In this way it can be better to be selective over which human you lay claim.

Keeping these variables in mind it’s not uncommon to restart a level with different slimes and take another strategy in mind.

After you beat each individual level through the story mode you will also unlock challenge levels. These use the same terrain but add more enemies to the mix, which can give you additional chances to add more slimes to your roster. The more slimes you have at your disposal, with a wide array of abilities and classes will definitely benefit you.

Actually, I couldn’t tell at times if the AI in the game was better than average or poor. There were a few times in the game when I felt it was a safer bet for my characters to hold back and let the enemies approach me. Whether they had a height advantage or I felt that I would have a better chance if I let them come to me, I wanted to wait them out. But more than once I would end my turn and watch as the entire batch of enemies would do the same. They wouldn’t move and wait for me to make a move. I literally did this multiple times and watched as the characters on the screen just idled, waiting for the other team to go first.

I must say that it was a great tactic on the enemy’s part, but wasn’t helpful for me. 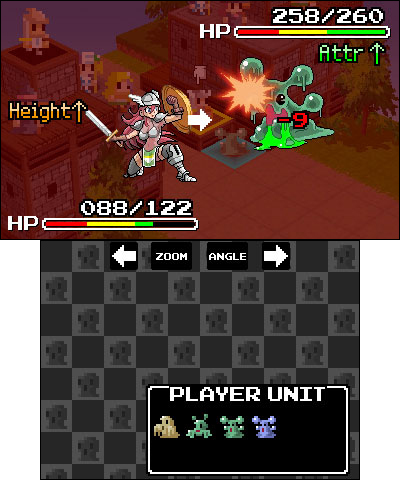 My only negative box ticked in the game is a very minor one, which doesn’t take anything away from the game itself. It’s more of a button mechanic choice in the menus prior to each battle. During battles you press the (Y) button to pull up more details of your slimes abilities on the lower screen. However when you’re selecting your slimes in the menu you have to press the (X) button instead to do this, with pressing (Y) sending you back to the difficulty select screen. It’s a very minor thing, but did cause me to second guess myself and press the wrong button at times.

For such a simple looking game, the retro inspired visuals of Ambition of the Slimes look beautiful. The 2D sprite characters look nice in the blocky 3D landscape of the game, which in turn looks great with 3D mode turned on. And while the soundtrack was a little bit repetitive, and the English translation was a bit funky, both were done well enough that neither was that distracting.

Overall, Ambition of the Slimes is a great game. It’s a simple game to pick up and play and yet at the same time has enough depth and difficulty to keep you playing.