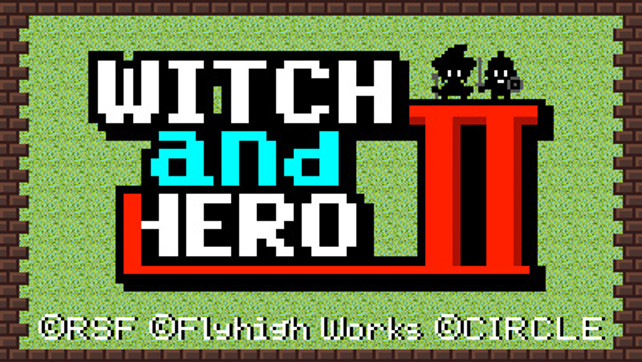 The original Witch & Hero was the second game I reviewed a few years back and I loved it. The game was the model of simplicity, both in approach and gameplay. Born from the look of the old school 8-bit era of games, Witch & Hero looked and felt like a game that could have been around when I was a kid.

Witch & Hero II takes everything that the original did so well and builds on it. Everything from the original game is intact, but the sequel has more meat.

The game takes place years after the events of the first game where a new Demon Lord comes to terrorize the world, with the Witch and Hero setting out to defeat him. Unfortunately they are defeated. Once news has spread of the defeat, two new heros emerge to fight the Demon Lord. These are who you will play as in the game.

The game mechanics are slightly different this time around. Whereas previously you controlled the hero only, because the witch had been turned to stone and was stationary in the centre of the screen, this time you control both at the same time. You control the Hero with the d-pad (or circle pad) and the Witch with the buttons. You can also switch this up if you prefer the opposite. This adds a whole new dynamic to the game. No longer are you just trying to protect the Witch, but she now plays an active role in the battle and can assist the Hero. As before the Witch can wield magic attacks that can put down a number of the foes that are gathering around to take YOU down. And with both characters mobile, it makes collecting the necessary blood drops to cast the spells much quicker.

There is one catch though.

While the Witch can also move around and attack, she only has one life. Whereas the Hero can fall and be restored an unlimited number of times, just like in the previous game if the Witch is defeated you’ll lose. But the Witch can do more than just fight or run away. When the Hero gets knocked down his life meter will slowly fill and once it does he’ll be ready to go. However if the Witch stands next to the Hero his life bar will restore much more quickly. This adds a very interesting dynamic to the game. Keep them far apart or keep them close together.

Another thing to note is that, for as fragile as the Witch is, all of the monsters invading the screen are focused on her. Every monster will lumber towards the Witch for their entire existence. This can be a very helpful thing as you won’t have to try to split your attention by dodging attacks from two characters simultaneously. This also gives you the opportunity to position your hero behind the advancing hordes and attack from the rear. Back attacks are far more effective in defeating the monsters.

The game has RPG elements in that you can gain levels to increase your HP and MP of your characters. Defeating monsters will earn you experience in green gems that some of them monsters drop. Defeated monsters will also drop coins, blood, and some of them will drop health items to restore both of your characters’s life. The Witch and the Hero share the life restoration, with the one picking up the item getting the lion’s share.

This time around the witch has double the magic attacks as well. Since she can move around, she has different attacks depending f if you have her set to be mobile or stationary. As with last time, the power of these attacks can also be upgraded. Your HP and MP will increase as you level up like most RPGs, however to increase your attack, defense and speed you’ll need to buy upgrades at a store between levels. You use the money dropped from the monsters to pay for it. Nearly every monster drops money for you to collect, with the stronger foes dropping more than the weaker.

The levels in Witch & Hero II are just as addictive as the first game, so it was a joy once again to grind. When you reach a level that has monsters that are too tough, you can replay easier levels as many times as you want to gain experience and earn money for upgrades. At the same time it also pays off to try and tough it out to defeat the latest level. Even if you are defeated you still gain some experience and money, which is halved before you collect. Being persistent can pay off. The only way to complete each level is to defeat the boss monster(s) in the level. These are the larger monsters. Defeating all of these will end the level, though since they all move pretty slowly it’s a better strategy to keep taking out the little guys and collecting both experience and cash.

Control in the game is very basic and simple with a strict bump and grind approach. No swinging of swords or other weapons. Just run into the monsters and you’ll give out and take damage. If you’ve ever played the Pokémon Rumble games you’ll have an idea when I mean. Later on in the levels your Hero will discover the holy sword which will allow him a powerful attack and temporarily invulnerability, letting you dish out some damage while not taking any. And best of all you can use this after you have fainted to come back instantly and with a vengeance. Be warned though, this doesn’t give the Witch invulnerability so don’t get too hasty.

The only thing that I didn’t at first was actually the new element of the game, controlling both characters at once. And I’ll admit that quite a few times I ended up looking at one character while trying to move the other. It was actually quite tricky. But looking back at the original game I appreciate that I can now move the Witch around. And her ability to help the Hero heal faster is such a great thing. It could be because it feels like the hordes of monsters are even more plentiful this time around.

If you enjoyed the original Witch & Hero then this is a no brainer, and if you like quick bursts of simple action RPG gameplay with a retro look and feel, this should definitely be in your 3DS library. Witch & Hero II has all of the same elements that made the first one fun, while boasting new features and a longer game length.