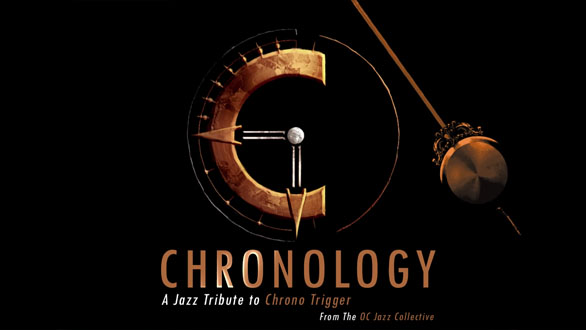 Overclocked Remix has released their 60th album project, this one focuses on giving Chrono Trigger fantastic soundtrack a jazz remake. Featuring eight tracks performed by a jazz ensemble it’s quite the treat! Focusing on one tune from each era of the game, the overall feel is a classy lounge sort of rendition of many favorites. As with project director Dylan Wiest, many of us have been drawn into the fantastic world of Chrono Trigger in the past and it’s always amazing to see musicians giving the music a fresh perspective. It’s a game that stands out, even today. A memorable title that to many of us even stood out as an equal among the Super Nintendo era Final Fantasy titles.

Welcome to Chronology: A Jazz Tribute to Chrono Trigger. You can find the download of the soundtrack here.

The following is the directors comments.

“I first played Chrono Trigger when I was seven years old . It was my introduction to JRPGs, anime, and most importantly, video game music. I can vividly remember watching my brother play this game… or was it a movie? It certainly wasn’t Super Mario Bros. or Donkey Kong Country. It had complex writing and intricate characters put into a vast and colourful world accompanied by music you might expect to hear in a film. As I learned to play the game, it consumed me. I would rent the game every weekend for what seemed like years. It didn’t matter how many times I had completed it because I could restart and it would seem like a new adventure every time. Needless to say, I have a bit of an addictive personality. Over the years, I would go on to obtain many new obsessions and interests that would come and go. Chrono Trigger, however, did not. I am 25 now and, after nearly two decades of playing the game, I can honestly say that it still remains an important part of my life and that every time I play it, I look at it with the same wide eyes and enthusiasm as when I was seven.

I explored Chrono Trigger through all of its facets whether it was trying to copy Akira Toriyama’s art (and learning that I’m not very good at drawing), discussing the more intricate plot features on the forums at Chrono Compendium, actively awaiting the English dub of Radical Dreamers so that I could further my knowledge in the Chronoverse, or attempting to learn Yasunori Mitusda’s score on piano. I believe at one point I had just about the entire soundtrack learned and it was this that nudged me in the direction of the video game music community and, eventually, OverClocked ReMix.

Fast forward another half-decade and I decided to pitch the idea for a jazz based Chrono Trigger album. It seemed like this was going to be an impossible task to accomplish given the genre restriction and general interest from other arrangers at the time so move ahead another couple years and the OC Jazz Collective was born. Through some fluke, I was able to assemble my own “dream team” of musicians and arrangers on OC ReMix who all shared a passion for jazz and video game music. I felt Chrono Trigger would be an ideal candidate for our first release given the game’s quickly approaching 20th anniversary and the fact that Mitsuda’s music lends itself so well to jazz and improvisation. The musicians and artists on this album have put in countless hours of practice and recording to produce an album which I think sounds authentic and natural. Jazz is a social music best captured in the moment… and while the production process of this album was anything but “in the moment,” I think the album’s sound and cohesiveness will speak for itself. It has been an honour getting to know and work with these talented artists from different parts of the world. Each of them brings their own unique sound and nuances to the album and without each and every one of them this album would not have been possible. I hope that our devotion to detail will be apparent in the music and that you will enjoy Chronology: A Jazz Tribute to Chrono Trigger. ”