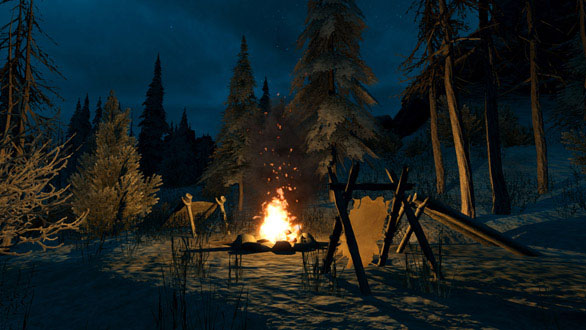 As far as early access goes and something that was nearly given away on the base tier of a recent Humble Bundle, Savage Lands is actually a pretty fun experience. At first glance I just assumed it was a basic indie Elder Scrolls sort of game, but it actually falls more into the survival and crafting genre. Sure this early access experience is still a little rough around the edges, but it’s the basics that kind of work the best for it. Stepping out of the way of lunging skeletons, strafing around an enraged boar, firing that one last arrow that hits a deer yards away while you’re character is starving to death, there’s a lot to be said about the little things.

Savage Lands dumps you on the shore of a pretty rough island. The aforementioned skeletons are just one of the dangers you’ll encounter. Let alone starving, freezing to death, and other fun activities. Normally you’d prepare to explore and set off without a care in the world. Meanwhile in this title, you’re more concerned with getting set up at the start. On the plus side there is gear to discover nearby, places to begin turning into a home, and trees to cut down to keep a fire stoked to cook your meals. As the Humble Bundle theme stated, it’s more about survival.

In a way, that makes Savage Lands more of a medieval Lost In Blue rather than an Oblivion like adventure. You could just sit on the beach and watch the icebergs drift by, or you can get going and start establishing yourself in this harsh and savage land.

Things are still rough, and the odd time I’ve been caught up on a hillside or a doorway, but it’s something different. There is a multiplayer component as well, so if you’d rather wander the world with some companions, that’s an option too. I was happy just to see that there was a single player local mode. Still, it’s a fun experience if you’re just looking to take things slow, collect up your resources and enjoy the chilly wilderness. Especially if you picked up the bundle, be sure to actually give the game a go. It’s shaping up to be quite the neat adventure.