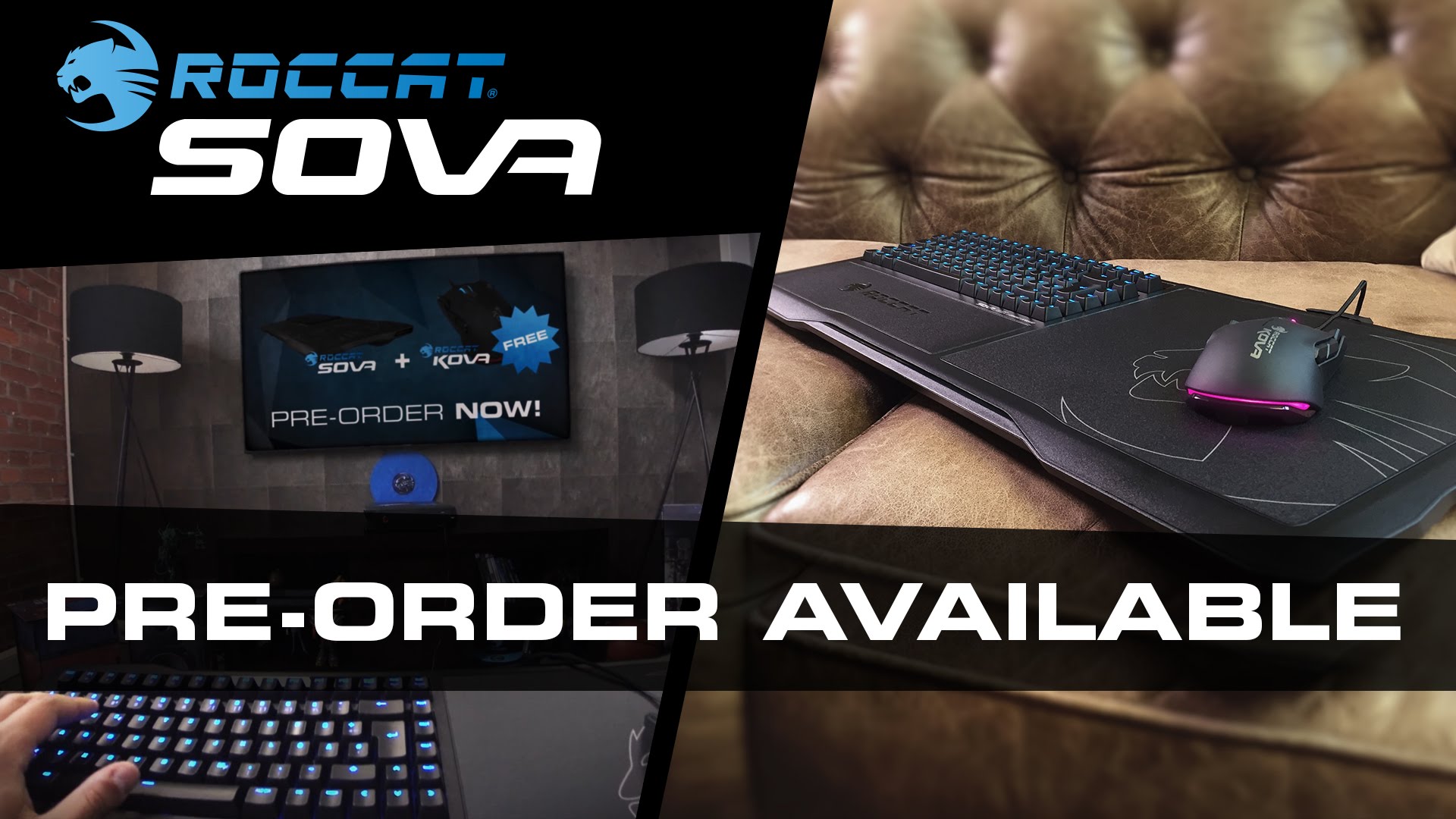 The Roccat Sova is a handsome black illuminated PC keyboard and mouse pad for your lap. It’s designed to deliver the same control you’d expect from a normal desktop setup, but in your lap. Either while you’re sitting on the couch or anywhere else you might have a flat surface. It meets this goal admirably as long as you’re using it on a PC with Windows. It does not have linux at the time of this review, beyond simple USB keyboard typing. 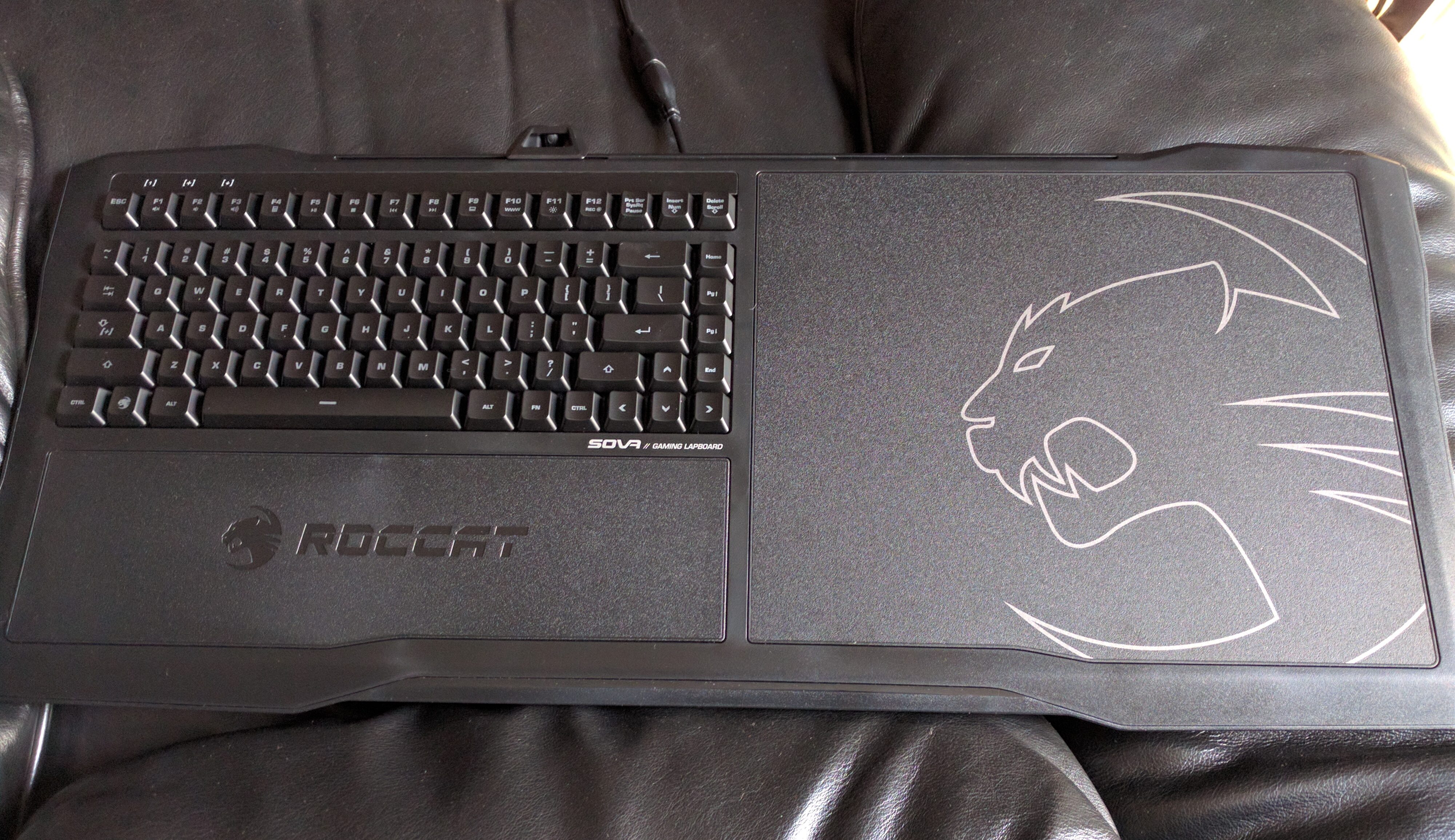 The full glory of the SOVA (couch not included)

The styling of the Sova is black and sleek, but it’s by no means undersized. It’s made of thick, very sturdy, black plastic. The design wouldn’t be out of place stashed next to any modern gaming PC. The mousepad features a large grey-on-black Roccat logo and there are several other Roccat logos subtly embossed into the plastic in various places. If there’s one thing that you want in a lapboard, its comfort, and the Sova delivers it. The keyboard is a full-sized keyboard but without a number pad: this leaves more space for the mouse pad. The unit had plenty of spare space for mouse use, while still sitting comfortably in my lap. The keyboard itself measures 300mm long by 120mm tall.

10The blue illuminated keys make it easy to find the key you’re looking for, even in the dark. Unfortunately, the model I was delivered was stuck in “breathing mode” for its backlighting. However, the backlighting is supposed to have multiple modes, and 6 different levels of illumination. The keyboard itself seems very high quality for a membrane keyboard. The keys are as high quality as the best membrane keyboards I’ve used, but of course it cannot compare to a mechanical keyboard. The upside of the unit having a membrane keyboard is that it’s quieter. The keys do not make any kind of clicking or clacking noises when pressed. There is a mechanical version of the Sova available for an extra $50 US, however. 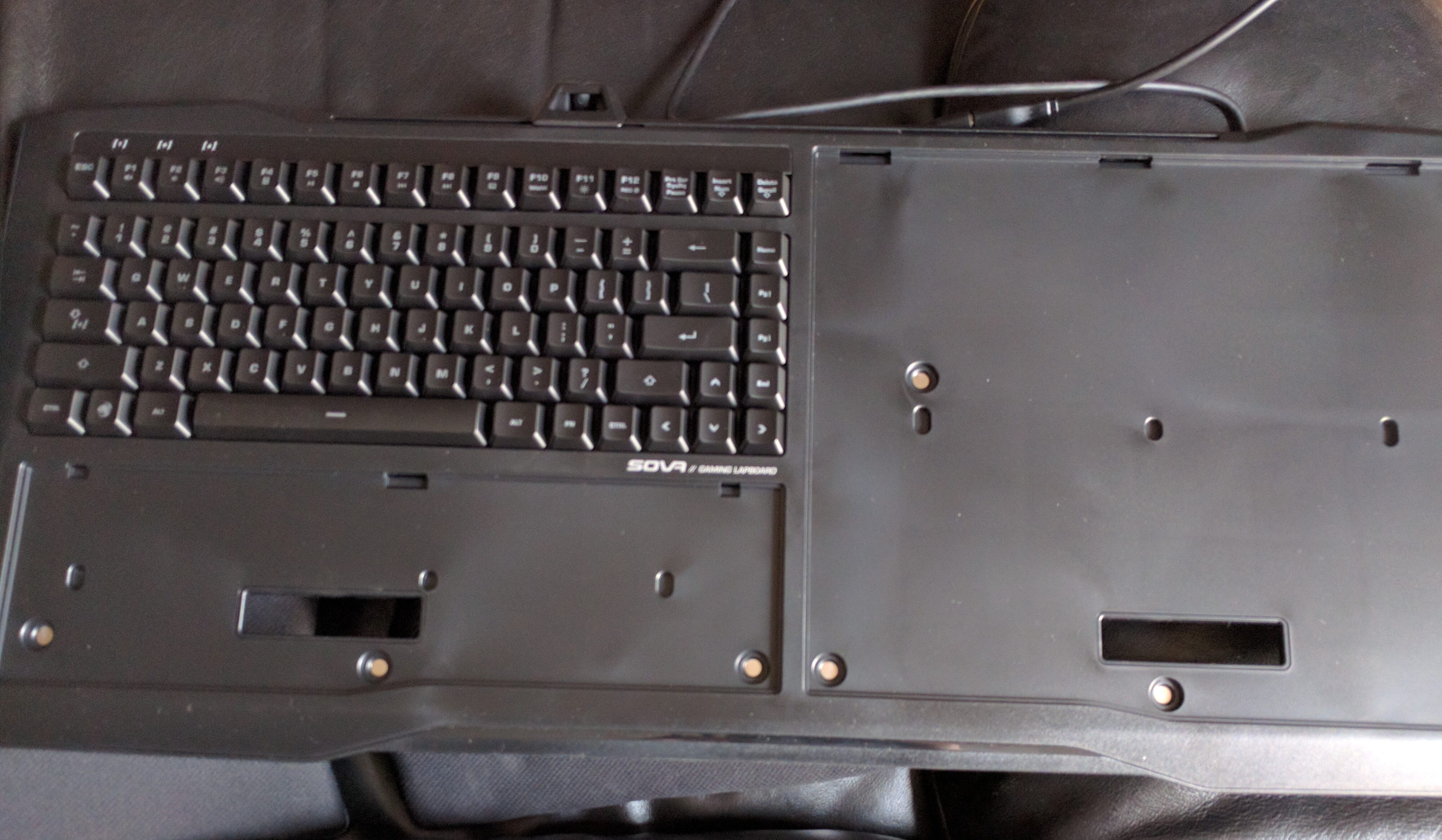 Just the keyboard is affixed to the unit, the rest pops off quite easily

The Sova has a great system for keeping pesky mouse cables out of the way. There are long channels molded into the back. These channels are designed to route cables through. In addition,  a mouse-cable holder snaps onto a variety of positions along the back of the keyboard. This holder grips your mouse cable and brings it up to the top of the board, ensuring you always have just enough cable for your mouse. This is a great feature which means there’s no worry that your mouse cable will get caught or trapped and prevent you from making the perfect head-shot.

The Sova includes a two-port usb hub. One of the ports is for your mouse, and the other is for your cell phone or other accessory. Unfortunately, connecting a cell phone to the keyboard is just like connecting a cell phone your computer. Because, this is a data transmitting USB port, the phone will recognize the keyboard as a computer. Phones only request 500 milliamps from computers so as to not stress the power supplies. This means it will only charge the cell phone very slowly. Roccat’s website indicates that eventually a cell-phone-holder accessory will be made available which clips onto the back of the Sova. 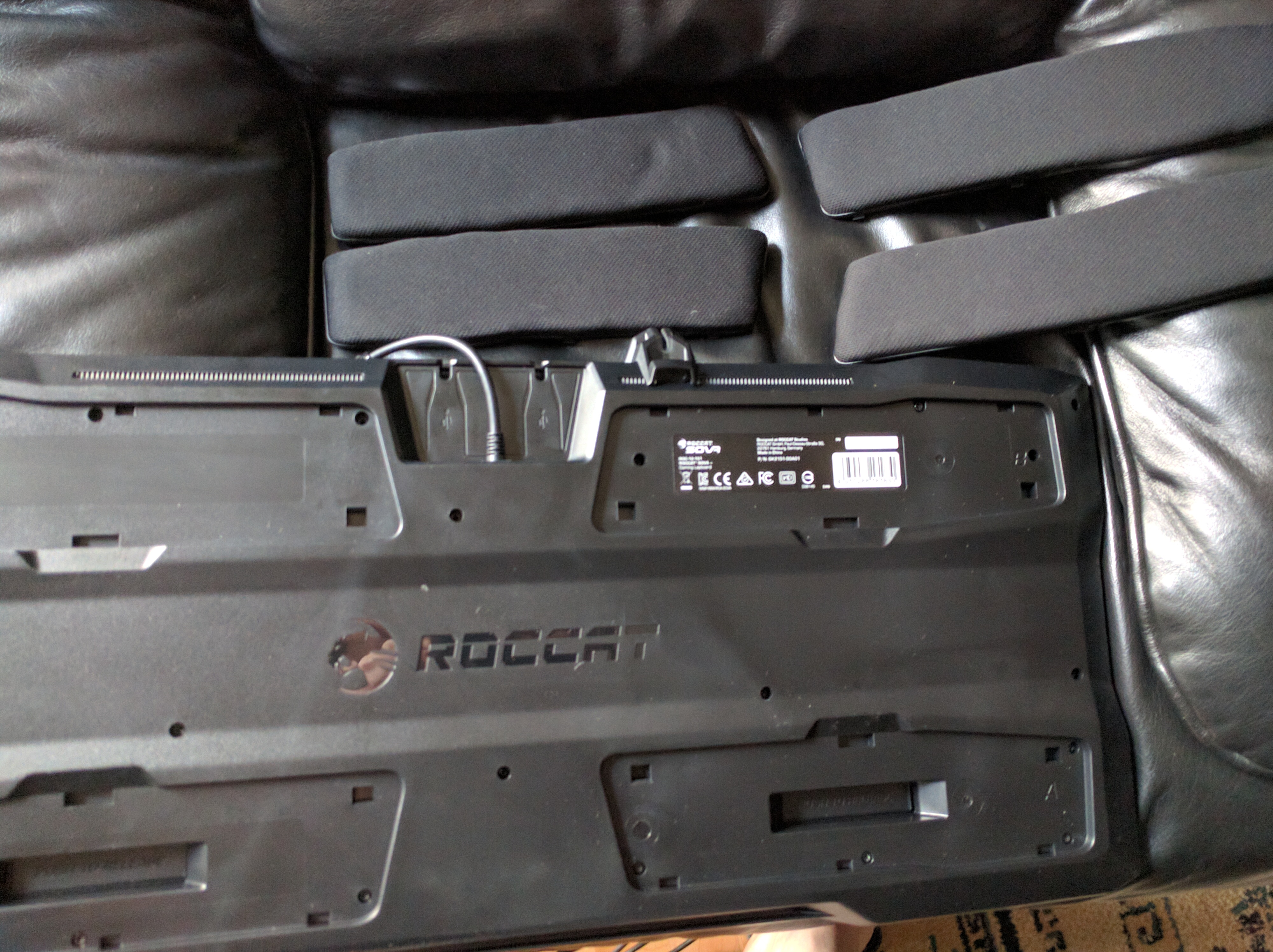 The USBs go in the back.

The keyboard and USB hub connect to your PC via a single long “breakaway” USB cable. The cable uses a 4-pin mini-DIN connector rather than a standard USB connector. If you misplace or break your Sova’s USB cable you will have to order a new one from Roccat. The USB cable also has two plugs and is meant to take up two USB ports. I suspect this is to provide extra power to ensure that the keyboard, mouse, and third device can all be powered without overloading a port on your PC. However, Roccat doesn’t explain this anywhere that I can find.

The mouse pad, wrist rest, and lap cushions are all removable, and according to Roccat replaceable. However, the keyboard doesn’t come with any replacements, so you’ll have to buy those separately if yours wear out. The mouse pad and wrist rest are both held in with magnets The lap cushion snaps in with plastic tabs. I like the use of  magnets, because it makes it easy to detach things, but they still feel secure. The keyboard is built into the Sova and cannot be removed. Since it’s on the left, and the mouse pad is on the right, if you use a mouse left-handed, the Sova will not work for you.

The “rail” on the back of the keyboard currently holds the mouse cord holder, but Roccat has promised that more accessories will come later.

The mouse pad is, quite honestly, the best mouse pad I’ve ever used. My mouse glides so smoothly over the surface it’s almost like it was floating on air. Combined with the mouse cord holder, this delivers an incredibly smooth mouse feel. I also tested it with Roccat’s own Kova mouse, and the experience was equally good. Right now Roccat is giving everyone who preorders the Sova a free Kova mouse.

Features like n-key rollover, (anti-ghosting) and illumination control do not work without the Windows drivers installed. So, if you’re looking for a lapboard keyboard to play on consoles or to control a home-theatre media PC that isn’t Windows, the Sova isn’t going to work as advertised. In fact, until you set the key illumination up with the Roccat software, it’s stuck in a pulsing mode that would be quite distracting while watching a movie. I was never able to get it out of pulsing mode, but I assume this is something that will fixed with a driver update.  Unfortunately, I was unable to obtain drivers for the Sova via Roccat’s Swarm software. I can’t confirm any of Roccat’s claims about n-key rollover (anti-ghosting), illumination control, polling rate, or any of the other advanced features. Hopefully the drivers and features will be available when the Sova is officially released.

After reaching out to Roccat’s community manager Tuan Mai I recieved this “the driver (with the features you mentioned) will be available when the product ships.” The version we reviewed is the cheaper version with a membrane keyboard (not a mechanical keyboard) and with only global illumination control. The more expensive version has per-key lighting control. At the time of writing, the Sova is available for pre-order from NewEgg in the United States for $150.

Roccat also claims that CAD (computer-assisted design) files for people with 3D printers will be made available. The idea is that owners with 3D printers would be able to print their own accessories that snap on to the Sova in the same way the mouse cable holder does. One accessory I’d like to see would be a clip to hold my TV remote control.

The Sova is designed for one thing: gaming comfortably, and it delivers that. It’s robust, made out of sturdy plastic with many removable pieces.  Just don’t spill your drink on it. The biggest problem with the Sova is that it currently lacks driver support. Overall, I’d recommend the Sova for anyone looking for a simple solution for gaming on the couch.