Falling Stars: War of Empire is a space sim developed by Riveted Games and published by Lock’n Load Publishing. It is a turn based space simulation in line with Civilization. Just like in Civilization you start with your single home planet and some ships and you send forces out to explore. When you find a neutral planet you have the choice to either barter with it and gain some immediate benefits like getting some free troops or transports, or you can conquer it. Conquering a planet allows you to build an Orbital Construction facility which allows you to build more ships and troops at that planet. So it’s a game of decisions, choosing the short or long term options, diplomacy, or war.  While this sounds like it should be the opening notes of more a nice in depth symphony of a game, it is sadly not. That is the only planetary management you will get, no trading between empires, and no real diplomacy at all. Folks expecting an epic 4x game in space are going to be disappointed.

The game feels very much more like Risk than civilization, though you may lose fewer friendships in Falling Stars than Risk. Though the game is fast paced I never felt like it was action packed. There is no fog of war, so the four empires can always see one another and you as the player must watch everything that happens each turn, even the battles between the AI. In this way its similar to other turn based games, but with no options to skip or even fast forward these AI turns it can really start to feel like a slog. Like the rest of the game the battles are very bare bones. You can setup your ships in whatever formation you would like in the squares you are given, and then you go and both sides continue shooting until everyone is dead. This is supposed to let you layer in tactics to your combat and you are supposed to be able to retreat, but it never seemed to do anything when I tried it and I still lost all of my ships. This lack of choice really hampers the ground and space battles that really should be a true interactive experience. It make it feel as though the battles are carried by whom ever has more brute strength. There is no give and take it pretty much just boils down to who brought the most ships or troops to the fight will be the victor.  Overall combat feels hollow and unfulfilling which is a disappointment because in a 4x game combat doesnt have to be first and foremost but it has to be fun and engaging. 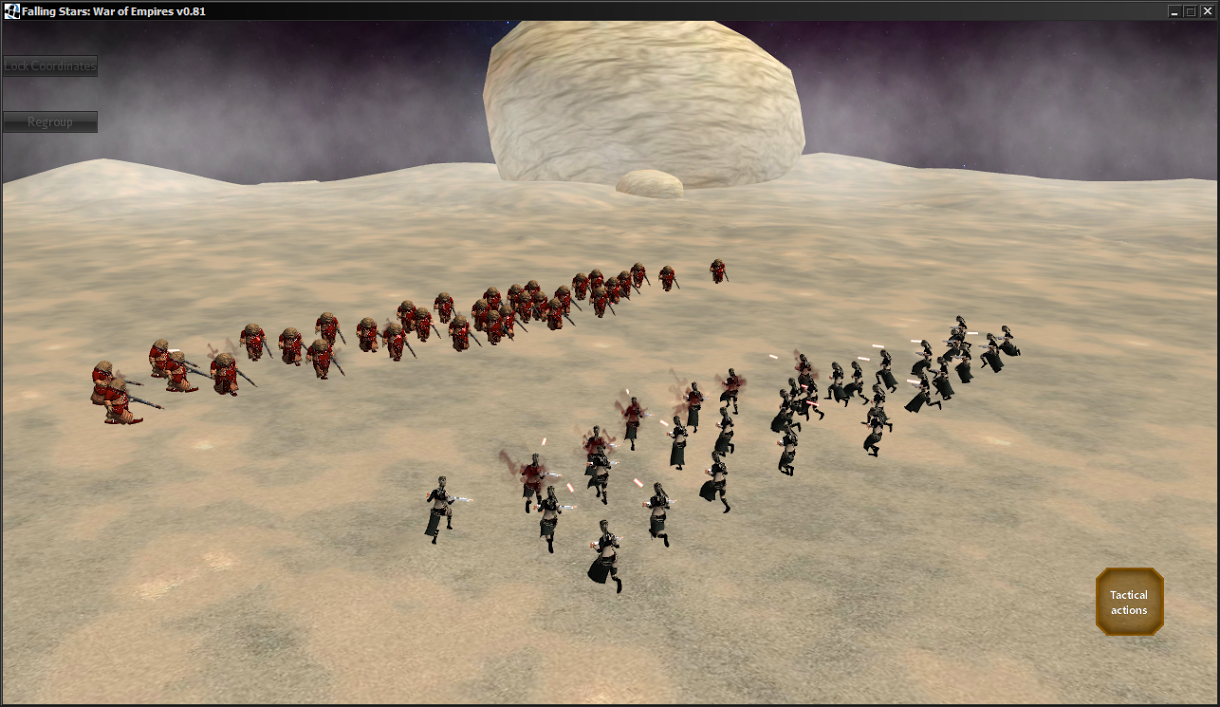 Combat plays out in a non involved way just units attacking each other in order.

My next gripe with Falling stars is that all the factions essentially play the same. Though you start with some different technologies as the different factions, by the end everyone has fighters, troops, carriers, cruisers, and dreadnoughts. Without the ability to negotiate or trade between the powers it puts everyone into the same strategy boat. Go conquer a world and build as many things as possible to win battles and gain victory points. It makes the game feel like a race instead of a grand 4x strategy game. just like most other games you win by getting victory points. Victory points are earned several ways, first for winning battles, next for researching tier three technologies, and finally for winning the vote in the one policy that come up at the start of each turn.

You have two resources in the game. First you have resources which are used to both building and researching technology, so a careful balance must be maintained. Second you have fuel, this is used to move your individual ships around the map. Pleas take note that I said ships, not fleets, each ship uses fuel, so you have to really plan out your movements as they can only move so far. So a lot of luck and well thought out strategy will ensure your ships are in the right place at the right time, hopefully. You of course gain more of these through resources by either bartering with planets or taking them over. Sadly, you will never have enough of either to do everything, so planning and placement are very important to winning the game. The real downside to this simple system is that once one empire has a good number of planets under their control they have a huge advantage in that they can build huge numbers of ships and move them to far flung parts of the map. This means that if you have a few small hitches early on, and overall end up with a bad start your going to spend the whole game behind. Which leads me to talk about the AI in general, there are no settings for the difficulty of the game that I could find. The computer will always make a perfect move pretty much every time, often one or two empires quickly become dominate and they never look back. If you are not one of them you are pretty much toast very early in the game. This brings us to the user interface. To be honest it is not well constructed, it was difficult to use and not natural feeling. The technology button is a building, the menu buttons are vertical which bothered me, and seemed an odd aesthetic choice that would work better on mobile than desktop. 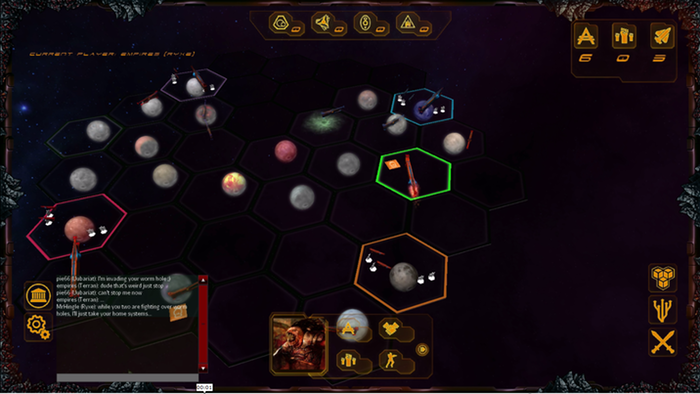 button layouts leave much to be desired

While this game certainly has the feeling of missing pieces there are some good things to be said about it too. One of the coolest things the developer has done is lower the price from forty dollars to twenty. This amount is a much more comfortable price for me for the included game experience. Next is games duration, while a small game of Civilization can take several hours if you are quick. A small game of Falling stars can be over in as little as ten of fifteen minutes. This means you can get your fix of 4x in much, much less time than a game of Civ would take. My first game after I completed the tutorial was over before I had a second turn. The AI had gotten ten victory points on its first turn, which was kind of disappointing. This seemed like a major flaw with the game, but that being said this game is lacking a few things but it has quick gameplay for those times you only have a small amount of time to play a game or you are playing while you may be interrupted with life duties.

I see a lot of potential with this game and the developers are listening to the fans and will continue to craft a better experience for us the gamers. So if you are looking for a game with fast games that will not take you all day to finish and one with fewer bells and whistles that Falling Stars: War of Empires is the game for you.