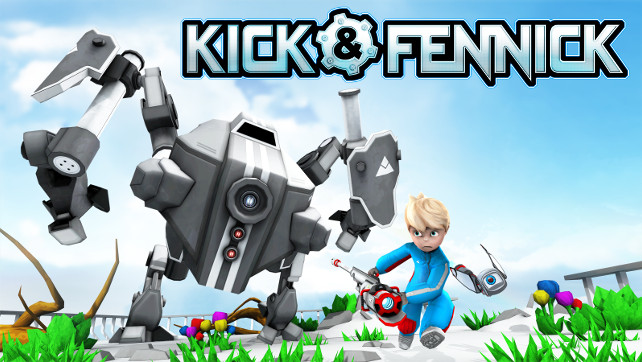 Abstraction Games announced today that their upcoming game Kick & Fennick will be released this June.

The game is an exciting action-filled adventure about a little boy, a big robot, an even bigger gun. The game is a physics platformer where the game’s charming namesake character Kick, must bounce, dodge, dash and leap their way through 45 levels and find his way to the Core Tower to save Fennick

Kick & Fennick tells the story of a young boy named Kick who finds himself waking up in a bright and colorful, yet dangerous world. Armed with a giant gun that can be used to shoot down enemy robots, while also allowing him to make huge jumps using the weapon’s powerful recoil, Kick searches for a way to the highest tower in the city to find a new energy core for Fennick, his helpful flying robot friend. Together they must explore this strange new world, jumping and shooting their way through 45 levels of collapsed skyscrapers, treadmills, bounce-pads, magnets, teleporters, and a big guard robot that are out to stop Kick at all costs!

“With Kick & Fennick, we tried to create a unique platforming experience. We’ve had fantastic reactions and can’t wait for a wider audience to be able to play through it,” said Vincent Bonefaas, Co-Founder of Jaywalkers Interactive. “Platforming fans looking for a breath of fresh air in the genre should definitely check it out, and we can’t wait to hear their feedback.”

Kick & Fennick is set to release June 2nd release on the Wii U and PlayStation 4, and on June 3rd for Xbox One.