The most fun I had playing a game at the recent PAX East convention wasn’t as I had expected one of the many Xbox games on demo (gears 4, Mirrors Edge 2) or even the VR experiences. It was in fact a new twist on the old school genre of the arena shooter. That game is called LawBreakers from Nexon, and it’s incredible. Arena shooter are nothing new, this year alone we have Gearbox and 2K’s cell shaded Battle Born, Blizzard’s massive Overwatch, and now LawBreakers. Arena shooters it would seem are back, and I for one could not be happier. So it should be no surprise that my favorite game was a shooter, but the one it was might surprise you. That game was LawBreakers.

LawBreakers was a bit of a stealth game prior to this PAX, the only thing I had seen for it was a B roll of highlights and a really well done CGI story trailer. Last we heard it was to be a free to play arena shooter with some moba like elements. The game was basically completely off my radar because of that. Now it has reemerged, a resurgent force in the new pantheon of arena shooters. The free to play model is gone, the game will now be exclusive to steam, and everything looks great. Since I hadn’t heard any of this prior to the convention,  I was quite surprised to upon reaching the floor  PAX find that it had a booth of its own, and quite a large one. The booth was adorned with character art, and a large screen playing some highlights of the game. 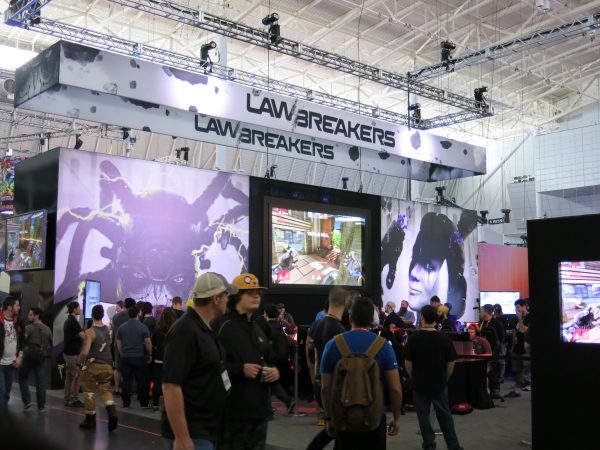 The roll playing on the large screen in back was what first attracted me to the game, and I was not disappointed. A fast ninja character swung outside the map to reach higher ground, a heavy soldier launched rockets, and a rocket carrying guy fired at his feet to launch himself up the air. My interest was peaked. It turned out that LawBreakers was a fast fun, class based arena shooter, so I got in line to give it a try. Since this was the media hour there weren’t many people waiting and I was able to get in quite quickly. As I settled my butt down in to one of the DxRacer chairs I really had no idea what to expect, I knew this was going to be a shooter with abilities, similar to several other AAA arena shooters scheduled for this year, but it really doesn’t look like those other ones at all. Instead it has the aesthetics of Quake or a Doom, with its own unique twist.

The game is really pretty, and as I got started I couldn’t help but look around at the beautiful world that had been created, but I found myself with no time to admire it as the game was beginning. To get an idea of how fast this game is you really have to play it, but I’ll do my best to describe it. I picked the generic soldier character with a rifle, sprint ability, a grenade, and a rocket launcher that you activated and then it sort of charged up and you could lock on and fire. He also had a secondary weapon that shot a large ball of lightning which a developer explained to me was basically a shotgun.

For this demo we were playing a 5v5 mode which was a sort of a capture the flag where you would pick up the flag which was called a “Battery” and then take it to charging station, where it would slowly charge and when it was full your team scored a point. The game was a timed mode, so the most points at the end of the time won. Our team managed to score two points in about 15 minutes of game play.

My team was composed of two of the fast movement based character Kitsune (classed as an assassin), one me (playing as the Breacher, classed as a gunner) and two Maverick’s (classed as a skirmisher) this was a pretty fair team comp. The skirmisher is a heavy gunner, the assassin is mobile, fragile, DPS unit, and I fell somewhere in between, giving us plenty of movement and ability to counter the enemies heavies and firepower to back it up. The only class missing was the games most advertised a heavy rocket solder called Cronos (classes as a Titan).

Teams thus assembled we began, and oh what a beginning, the battery began in the center and both teams rushed to it. I was also given a sprint ability which made me really much faster than the rest of the other players, but was very limited. So I used it to sprint to the center of the map. The center area of the map we played on (the Grand Canyon) was one of the games signature zero G areas. These areas see you able to jump much higher and sort of float, and are the reason I found this game so unique. Most if not all of the characters in the game have a movement ability, which comes in greatly handy when you’re dealing with an area that has no gravity in it. I found that if I jumped headed for a ledge I would sometimes make it and sometime snot which felt really fun and interesting as a game mechanic

As the game continued I got a little better at this area, and could after some time manage to get myself out of the zero g area by shooting or using grenades. My team eked out a win after about 15 minutes of game play, and it wasn’t easy! The battery was constantly back and forth between our two teams, and the great level design meant that when the battery was in your base charging you couldn’t just camp it because there were too many ways in. I also want to mention that this game features the older school method of a large health pool that does not regenerate. So when you have low healthy (which will happen a lot) you have two options, first you can stay in and maybe die, or you can disengage and go to a health station, of which I found three on the map, and stand in it for a while to regain health.  This was a cool mechanic that I wish more modern shooters would use; I dislike the regenerating health that seems to be the standard, as it seems to encourage small quick engagements and then fleeing.  Each different character also has a different amount of health, so your tanky Titan characters will be able to take more hits than say an assassin Kitsune.

The game does have melee, in the form of a kick, and thank god for that, because otherwise Kitsune (the assassin) would be so overpowered it would be sickening. She’s still quite powerful in the hands of a good player, but others will quickly learn to kick her back and shoot at her to prevent a slicing dicing death.  These little bits of attention to detail, like giving the long range soldier a short range option in his secondary weapon, really made the game feel complete and balanced.

The whole game felt amazing, complete, and ready to go, I didn’t catch any major bugs or errors in my short time playing but I did notice that maps weren’t rotating so it seems like only that one map was ready at the time of the demo.  The gravity elements didn’t feel contrived and all of the classes felt like they were balanced. Each one could do damage, get kills, and do enough damage to be considered viable.  Overall I really cant wait to play this game when it eventually hits shelves.

you can sing up for the Alpha test phase of LawBreakers here.

May 2, 2016 by Fionna Schweit News Opinions/Editorials