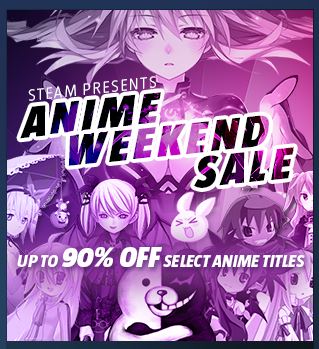 So anyone who is recently reading the site knows I am a huge anime fan, I recently unboxed an anime lootcrate, I shared with you my current watch list for this season, and now I may have died and gone to heaven, because Steam is  having a sale on anime games. Steep discounts are being offered on everything from the well known Naruto Shippuden: Ultimate Ninja Storm series all the way to the series of Hyperdimension Neptunia games and nearly everything in between.

If you are a fan of anime at all, this sale is going to empty your wallet. Even if you are just a fan of anime style fighting games you may be in trouble as all of the guilty gear and Blaze Blue games are also on sale! It seems like steam has really pulled out all of the stop on their anime collection. The discounts are a bit all over though, 10% on Helen’s Mysterious Castle doesnt really feel like its as good of a deal as 75% off of Chantelise. I could nitpick a whole bunch including how some of these games aren’t really anime but I am just glad to see steam featuring anything developed out side of the west.

Here is the full list if you really want it highlights include  Hatoful Boyfriend for $2.49, Transformers: Devastation for $24.99 and the Mega Man Legacy Collection for $10. But if you are anything like me, that is a giant anime nerd, you probably already own at least a few of these, and the rest may be sitting on your wish list. Interestingly, also included in the sale are several Naruto movies, and as far as i can tell only Naruto movies. I didn’t even know that steam sold movies, I guess I know now.