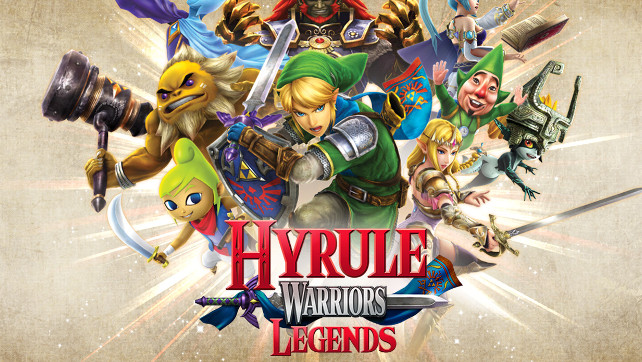 Hyrule Warriors Legends is a scaled down version of the hit Wii U title of last year, and while it does fall victim to a few flaws it is overall a fun title. That being said, if you have the original Hyrule Warriors Wii U version and can do without all of the new DLC that has been added to the game then the game is an easy pass.

Hyrule Warriors Legends is once again a co production between Nintendo and Koei Tecmo and mixes the Zelda characters and universe with the hack-and-slash gameplay from the Dynasty Warriors series.

The big draw to the new edition of the game is of course the new added characters. The game features not only all of the DLC from the Wii U original title, but also has five new characters packed into the game. And that’s not including any unannounced playable characters included in the upcoming DLC. New to Hyrule Warriors Legends are Linkle, a girl who wields two crossbows and lives in a small village filled with Cuccos, Skull Kid from The Legend of Zelda: Majora’s Mask, and characters from The Legend of Zelda: The Wind Waker, including Toon Link, King Daphnes and Tetra. Also added to the game is a new item in the Ocarina. This new items lets players warp to different owl statues located around the various stages, which can make things a little easier to manage when you’re going solo through the level and need to go help a keep or complete a side quest. Also added to the game is the hammer, which can be used to smash things, including enemies.

The main game is mostly intact with the main story taking place in Legend mode. You’ll be playing through the same story with Link, Impa, Sheik, Princess Zelda herself as well as a number of other unlockable characters as before, with the addition of the new characters unique to Legends.

The battles are very chaotic, though with the original 3DS they are somewhat slow. The battles are fully workable and are still just as fun to play, but the reaction time for many attacks and movements feels just a bit sluggish. The game is said to play much more smoothly on the New 3DS, and the website for the game actually says “Best enjoyed on New Nintendo 3DS.”

Another new addition to the game is My Fairy, which you can unlock in Adventure Mode. You can gain fairy companions by smashing the jar in an enemy keep and then winning those battles in Adcenture Mode. You can then feed, clothe, and equip your faeries to aid you in battle. You can also borrow “rental skills” from other players with local play. Hyrule Warriors Legends also features special battles via the internet. If you’re connected to the internet, other Link characters may appear on the world map in Adventure Mode. You can assist them in winning battles on their maps. These battles are more difficult, but the rewards are also well worth it. This also words with the StreetPass feature in the game.

amiibo functionality in Hyrule Warriors Legends is the same as the Wii U predecessor. Tapping any amiibo figure or card to the New Nintendo 3DS (or by using the Nintendo 3DS NFC Reader/Writer accessory), players can receive weapons, Rupees and other bonuses. By using amiibo for characters from The Legend of Zelda series like Link, Zelda, Sheik, or Ganondorf, you’ll have a better chance to receive weapons rated 3 stars or higher.

Hyrule Warriors Legends isn’t without it’s own share of DLC. While it contains all of the DLC from the Wii U game, there are four planned DLC packs on the way. Best of all they can be purchased for the 3DS game alone or for the Wii U game as well.

A season pass is also available to access to all four DLC packs and a bonus costume for Ganondorf that’s exclusive to Hyrule Warriors Legends. These packs will also be available for purchase individually in Nintendo eShop during the next few months, but players receive a better value by purchasing the season pass. Medli from The Legend of Zelda: The Wind Waker will also be available as a free download starting when the first DLC pack is released.

For what it is, Hyrule Warriors Legends is still a solid title. It’s a bit weaker and slower than it’s Wii U predecessor, but that’t to be expected with the power limitations of Nintendo’s portable. The experience on the New Nintendo 3DS is a bit more fluid than that of the older systems, but the game is still completely playable. If you don’t have a Wii U and haven’t played the original game then this is definitely worth checking out.