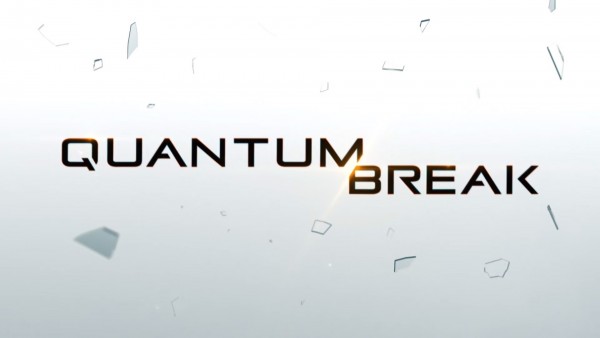 Warning: In order to discuss Quantum Break’s plot effectively this review does contain spoilers up until the end of Act 1 and also contains descriptions of late game abilities.

Finnish developer Remedy Entertainment returns with their first console  game since 2012’s Alan Wake’s American Nightmare. Originally revealed alongside the Xbox One in 2013, after three years of development and a protagonist change can Quantum Break live up to expectations? Don’t skip time forward to read my closing paragraph – keep the timeline clear and read about why Quantum Break is one of the most ambitious sci-fi games available on any platform, not just the Xbox One.

Players take the role of Jack Joyce – a late 20s / early 30s everyman who I can’t help but describe as a literal blank slate. Aside from his tangential past connections to important story characters and quick witted quips that will remind Uncharted fans of Nathan Drake we really don’t know much about what makes Jack tick at the beginning of the game that doesn’t change much throughout the 20+ hour campaign. What sets Jack apart from other game protagonists is the motion capture and voice work from Canadian actor of X-Men fame, Shawn Ashmore. His delivery and facial capture are expressive and it is really refreshing to hear a male protagonist who lacks the gruff deep voice and tough exterior we see so often in the action / adventure genre. Jack isn’t a trained soldier – he can’t slide into cover and he can’t blind fire from behind a wall, he’s an average person thrust into extraordinary circumstances. 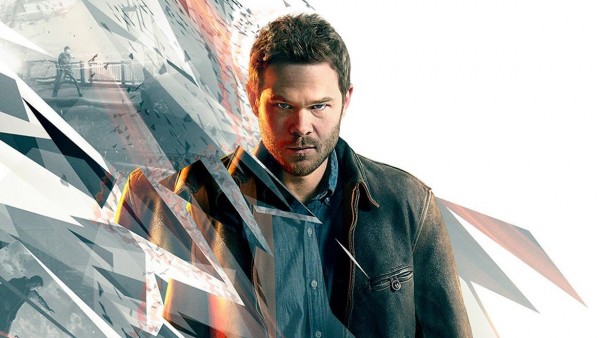 At it’s core Quantum Break is an action/adventure game about the ramification of the flow of time breaking down and the response humanity might have if we were given advanced notice of it occurring. This interesting science fiction concept combined with fluid combat and a SyFy-esque original television program – cut up into 4Episodes (one at the end of each episode) – make Quantum Break one of the most ambitious action titles to hit titles in a number of years. This makes the flow of gameplay in Quantum Break quite predictable: Fight your way through various waves of dudes, get to the next in-game plot building cut-scene and then watch a 22 minute television episode. This might sound like it would get boring but to be honest it combines two things that I really love: science fiction with a unique hook and high stakes science fiction television that keeps you guessing / theorizing from between episodes.

As I already mentioned combat in Quantum Break feels fluid and is quite enjoyable and will satisfy players coming to the game looking for a smooth and adrenaline packed combat experience.  Shooting feels precise and Jack tends to spray and pray a bit but there are a number of weapons available ranging from standard 9mm pistols, automatic pistols, submachine guns like the Mp5 and large machine guns. Oddly enough there is a distinct lack of scoped weapons, grenades and other paramilitary gear given that Jack is tacking on a paramilitary organization. For long-time Remedy fans the gun-play might bring 2001’s Max Payne to mind, although unlike Mr.Payne Jack doesn’t dive around the stage and perform slow motion backward maneuvers. 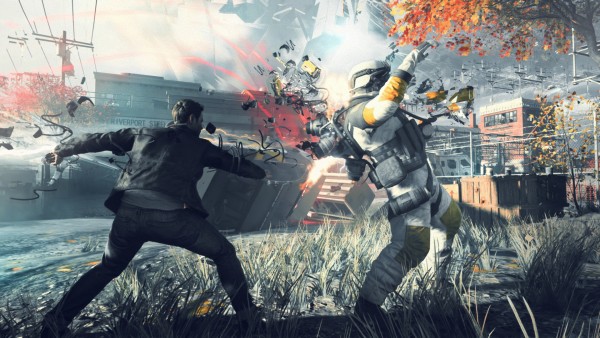 Perhaps the biggest draw for Quantum Break’s combat is Jack Joyce’s unique suite of time related abilities. Jack’s abilities start out simple enough – the game gives players a few simple abilities to play around with in the opening sections of ACT 1. Early sections of the game have you relying solely on your time dash ability, which lets Jack zip around the environment at blazing speeds for a short duration and the time bubble which allows Jack to cast a small bubble in front of him where the effects of time are nullified.  The time bubble can be an interesting strategic choice because it can allow you to stop enemies in their tracks, giving you the extra (heh heh heh) time you need to maneuver around them. I also found some humour moments with the time bubble ability such as using the bubble on a barrel that is mid-explosion, stopping the explosion, and then seeing a group of enemies walk past it just as the bubbles effects faded. Quantum Break is constantly giving players the opportunities to find hidden upgrade orbs to unlock new abilities. Sadly even with all of the shiny toys the game will give Jack access too the actual encounter design is rather lacking. Pretty much all of the enemy encounters can be summed up as “corridor with dudes” or “hallway with dudes” or “facility with dudes” and your objective 99% of the time to progress is just “kill all the dudes”. Quantum Break doesn’t exactly have any solidly designed puzzles to keep players from progressing, the majority of the fun to be had during combat is allowing the player to find interesting ways to use Jack’s ever expanding arsenal of powers.

I’ve avoided this long enough, it is time to talk about the plot. SPOILER WARNING for the end of ACT 1 of Quantum Break from here on out. Our plot kicks off with Jack meeting up with his friend Paul at the University where Paul is employed late one night at 4 in the Morning. After some trivial banter it is revealed that Paul has brought Jack all the way around the world, back to the United States, to assist in some less than ethical experiments involving a functioning time machine. The trope of the malfunctioning experiment turned awry has been well explored in games – the most notable example that comes to mind is the “anomalous materials” chapter from the opening segment of Half-Life 1. Unlike that game however, Paul’s experiment initially works when he sets the time machine 5 minutes into the past and is confronted with a duplicate version of himself emerging from the machine. This is where the player is introduced to closed loop time mechanics – the idea that events are effected by a time traveler’s trip to the past effect events in the current and therefore are part a predestined “time script” that will occur – this sometimes confusing principal becomes central to the plot with the reveal at the end of Act 1 that an older version of Paul is actually the game’s main antagonist.  This plot twist might sound like it’ll make player’s heads-spin but honestly it is just the start of the time shenanigans that players will experience during Quantum Break’s 20+ hour narrative. 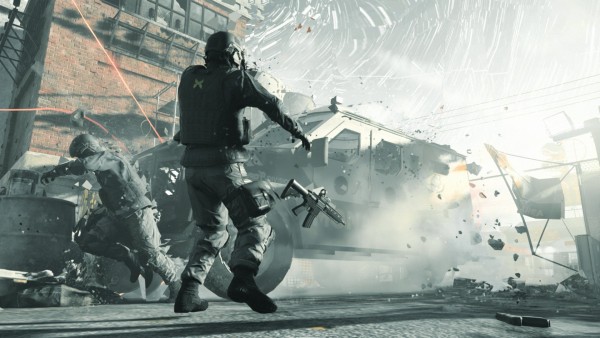 The most divisive element of this game is probably going to the 4 live action television episodes that air between the acts of the main campaign. These live action episodes gives players a view into the game’s antagonistic Monarch Solutions and the employees who are working to capture Jack Joyce at all costs. Actors like Shaun Ashmore and others who lent their acting skills & voice to characters in the playable sections reprise their roles in the live-action TV episodes. You might think that this would be quite jarring but I appreciate what Remedy Entertainment is trying to accomplish with this mixture of live action footage and gameplay. One of the cooler aspect of the television show is the fact that major decisions made during the gameplay sections affect the live action show and vice versa. Watching player actions affect different kinds of media is an interesting experiment in interactive entertainment and there’s quite anything like it, it’s almost like this is the FMV games from the late 90s have developed to their full potential.

Quantum Break is definitely worth your time if you love science fiction and action games. The mixture of live action footage and gameplay with the same actors is an ambitious experiment that works for the most part. I found the theoretical science used for the game’s time travel and the world Remedy has built through the included in-game logs quite compelling. Unfortunately Quantum Break doesn’t take the leap into the pantheon of science fiction, it spends so much time building its world the development of most characters fall short and they are unfortunately one dimensional. The game also doesn’t really explore how the universe’s time travel would affect the human condition, which in my opinion is the mark of true long lasting science fiction. Gameplay sections can be quite repetitive but the ever expanding arsenal of toys at Jack’s disposal make the gameplay quite entertaining if you’ve got the creativity to come up with new ways to mess with enemies.