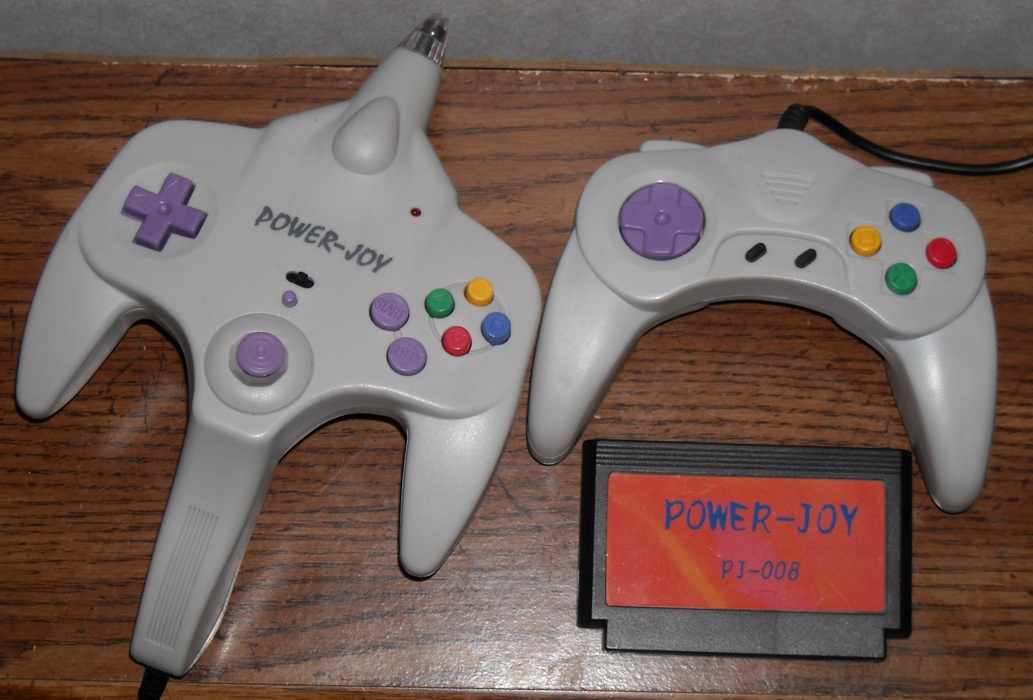 Broken Bootlegs is a series covering unlicensed games (also known as bootleg games) for mainly 8-bit and 16-bit consoles. This week’s edition is covers my experiences with my first bit of pirate hardware that originally my interest in playing around with bootleg games and hardware: the Power Joy.

It what seems feels a very long time ago, which probably was a little over a decade ago, I was traveling around going to garage sales looking for anything computer or video game-related like I usually do. I eventually happened upon something very unusual: a white device in the shape of a Nintendo 64 controller with a Playstation 1-styled controller that could hook into the former, and a very odd-looking cartridge that was attached bottom of first controller. Nothing else came with it except a cardboard box that had POWER JOY printed on the side. After buying it and taking it home, I found some batteries to put into it, hooked it up to my tv and after turning everything on, I saw a menu that had “64-in-1” at the top of it. I start going though some of the games like Aladdin, Circus Charlie, Karate, Formation Z, and some light gun games, to name a few. While I was still not familiar with a bootleg devices and games, I thought it was really odd that something like this existed and when it clicked that some of these games were from the NES, I wondered how the heck it was legal. Putting that thought aside for a while, I discovered that the cartridge in the system was removable and that games could be played without the cart in there! One of the only games that I can remember that was built onto the system was a Columns clone that was pretty fun to play since I’ve played it on the Sega Genesis. Most of the games had any copyright information stripped from them and some had titles altered, so it was difficult to tell what games they were until some time after the fact. Regardless, it was a fun system to play on even if the battery compartment was super-flaky, until it died on me. The smell of burnt electronics is not a pleasant one, mind you.

Over the years that I had the console, I tried doing research on it and discovered what NOAC (Nindendo-on-A-Chip) systems were, and happened upon this Wikipedia page regarding hardware that was based off of the Power Joy, which seemed to be one of the successors of the original Power-Joy. From that page, I learned about how Nintendo really didn’t like the fact that consoles as such were being made as they were trademark violations and took legal action against people that were distributing and selling these products. It’s understandable that was done to protect their product line, which possibly tied into protecting parties and eventual launch of the Wii and Virtual Console. As I learned more about Famiclones, I found out about clone systems for other consoles, how they stack up against the originals, and features. In addition to that, I tried learning what I could about multicarts that are out there for various systems, and other hardware that went with older systems to be able to play games from different consoles on them like the Tri-Star. There’s a lot out there in terms of hardware and software on places like amazon or ebay, where I got that Pokemon 4-in-1, for example. Some of software out there is really easy to find and play on if one has the hardware to play it on, and that can be easy as well if you’re looking for one of those multi-system consoles. Something to keep in mind though with clone consoles or hardware that turns a console into a multi-system are various compatibility issues with games, which may give off minor annoyances, or make games completely unplayable. One honestly gets what they pay for, especially if it’s a…broken bootleg.