PolyRace may seem like a deceptively basic and easy racing game at first glance, but it provides enough variety to be able to play though and try for the best times while not trying to crash and burn. After starting the game up and customizing the controls to my liking, I fired up a training mission to get a feel for the overall game. With a fresh game, the player is limited in their options for choosing hover-cars, difficulty, and track type. As one progresses though Missions, those will unlock, which gives decent variety for running through races.

One of the big things that I noticed that can make things interesting is how race courses are seed generated. For people that aren’t familiar with seed generation, for this game it’s a six character set that is used as the basis for generating every race course. In this case, two letters, two digits, and two letters are used for generation, thus keeping variables limited, but not to the point of where courses are repetitive on play-through at least. With choices of desert, Arctic, and continental terrain types, courses are filled with valleys, hills, mountains, cures, straight lines, and obstacles like trees and rocks to avoid. Taking a note from the F-Zero series, the hover-car has a shield which limits how much punishment it can take at one go. Thankfully, it automatically regenerates after a time of not taking any damage, but something like a head-on collision with a mountain will make the hover-car crash and burn.

For the hovercars, there’s one that’s available to start, with three more to unlock while playing missions, along with additional color schemes for each of the hovercars. Each hovercar is unique in regards to speed, acceleration, handling, shield regeneration delay, and so on. The controls are are a bit floaty, but that is to be expected when trying to control a hovercar as opposed to, say, a wheel-based vehicle. For people that aren’t used to that kind of control response, it’s really easy to crash into terrain, but it’s not difficult to get used to. The four difficulty settings scales nicely, so that while playing the easiest difficulty, it isn’t too easy, but when playing normal or hard difficulties, they aren’t harder than they should be. Graphically, PolyRace looks like it would be right at home on a Sega Dreamcast. It isn’t overtly blocky, but also isn’t entirely smooth either, which makes it easier to run on older systems such as my 7 year old gaming laptop. Missions are completed by either reaching the end of the track or by hitting checkpoints with time attack. Depending on player performance, stars may be earned to eventually unlock additional missions. In addition to that, after meeting certain requirements that’s stipulated within the mission, the player can unlock the developer’s ghost for some competition. Besides being able to unlock the developer ghost, the player can compete against themselves with their own ghost after completing a course. 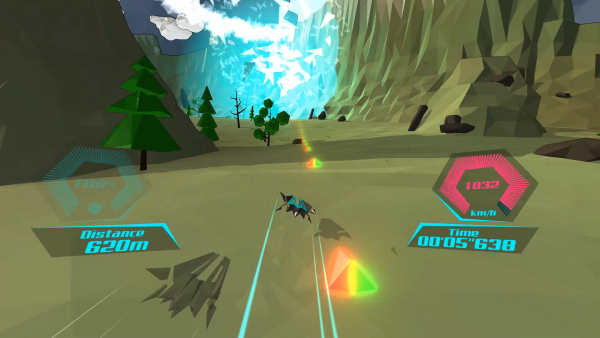 While there is no multiplayer in a traditional sense, players can create challenges for other people to compete against. The options for setting up a challenge are pretty self-explanatory with choosing the race type, difficulty, and hovercar used. Once setup, the player can race that their data is saved to the content server for other players can search for or can directly play if they have the shortcode for it.The only drawback for creating races though is that the player is limited to what’s been unlocked from playing missions. So if someone is looking to create a race with all available options, missions will have to be beaten to make that possible. From there is the Race of the Day, in which players can compete for the best ranking on the leaderboards. From my experience playing, it’s been usually a Hard difficulty game, which has proven to be a challenge to get though as I’m a bit rusty at racing games in general. One other thing of note, though, is that it’s a bit of an open-map course with line markers designating where the main path is. If there’s a faster path to go though or objects to plow through, there is that option.

The music and sound within this game is what I would expect in any futuristic racing game and since the developer BinaryDream took inspiration from other games of this type, it fits really well into the game. Overall, it’s a fun game to play and get though, but there is one thing that isn’t in there: multiplayer racing. I realize that having placed races with other players was not envisioned by the developer at all, as that would likely have made things more complicated for not only getting into races, but probably a programmer perspective as well. Regardless, the game’s Mission challenges can keep a player going for a while and creating challenges is also something fun to do.