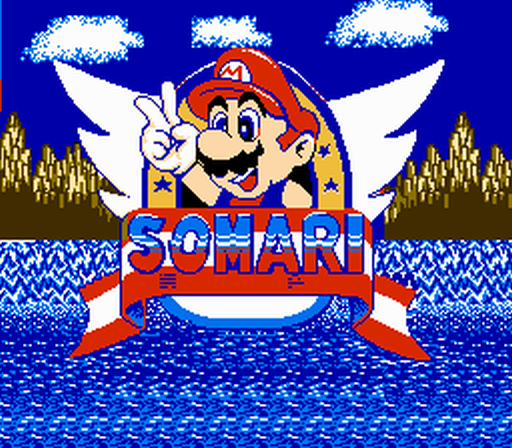 Broken Bootlegs is a weekly series covering unlicensed games (also known as bootleg games) for mainly 8-bit and 16-bit consoles. This week’s edition covers possibly one of the most well-known bootlegs out there: Somari!

As briefly mentioned in the first entry of this series, Somari is not only is a bootleg of one game, Sonic the Hedgehog, but also redone to star Mario! Developed by Hummer Team, known as Someri or Somari Team for this release, is standard fare of their in-house conversions of 16-bit games to the Famicom. Things are similar enough, while having that A+ bootleg quality one would expect from Hummer Team. With that said, it’s a mixed experience while playing the game. It starts off with the Sonic 1 title screen with Mario’s face plastered on it, which was actually nicely done. While playing, I’ve noticed that the physics were a bit off, just like with other Hummer Team games, which can make timing some jumps and attacks a bit difficult. Fortunately though, is that Somari can spindash! While not cannon to the original Sonic, this does help out during a play-through and can make the game a little easier. The stages are similar to the source material, which is also good, but if you’re expecting something right out of the original game, then you’re in for a surprise. The boss battles are mostly the same while playing though, but due to system limitations, there’s usually a decent amount of sprite flicker to go along with it. Graphically, it looks like what might appear on a Sega Master system in a much more color-limited space. It makes good use of the limited colour palette, but everything still looks washed out. As for difficulty, this game suffers from some of the same physics issues from Super Mario World, and Somari can get stuck in places on ramps, making it difficult to get past some areas. In addition to that, enemies respawn, making it a bit more difficult overall. With the game music, it’s also hit and miss due to the fact that some of the instrument choices that Hummer Team has used either make some of the soundtrack sound ok, or actually really decent in spots. One of the tracks that really stood out for me is Spring Yard Zone, which actually sounds decent.

Overall, this game can be fun to play when it’s not being frustrating due to the physics engine being crap, and if Sega was making games for the Nintendo instead of duking it out in the console wars in the 90s, this could almost be a decent port of Sonic 1. That thought aside, it’s a shame that there’s no real Scrap Brain Zone included in this game. Besides that, the special stage was taken from the Master System version instead of from the Genesis, but seems like a moot point as there’s no Chaos Emeralds, and only one ending to the game. There are a multitude of hacks of this game, most of which have a few edits to the title screen and change the starting zone. Some of the more well-known hacks of Somari are Sonic 3D Blast 5, Sonic & Knuckles 5, Family Kid, and Doraemon. I may cover Doraemon in a future entry of Broken Bootlegs, as enough has changed in that game to warrant a possible review. As for Somari itself, this would make a great piece in any bootleg collector’s collection, or even for any major Sonic fan out there