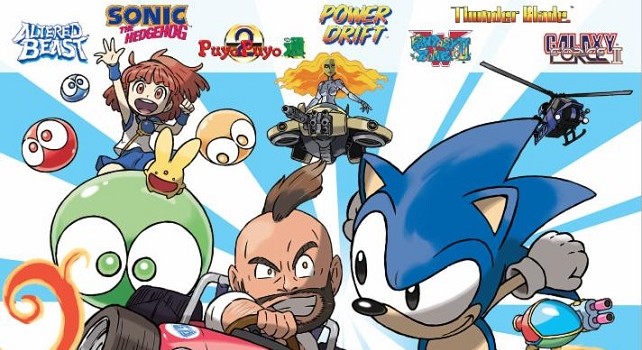 SEGA announced today that pre-orders and a limited number of launch copies of SEGA 3D Classics Collection will come with the SEGA Classics Decal Sheet bonus item. The sheet will be available in every physical launch edition of the collection, and features nine SEGA logos and console stickers. The decals are a silver hue to add a nice contrast to your 3DS, giving it a distinct retro sheen.

The collection features some of SEGA’s signature games, and the bonus item adds the right amount of vintage goodness to complete the throwback experience.

The SEGA 3D Classics Collection will be released for $29.99/CA $44.99 in the Americas on April 26th, 2016. The collection is available for the 3DS in stores and digitally on the Nintendo eShop.

Here’s a brief history of the decals:

Master System logo — Originally released in 1985 as the Sega Mark-III in Japan, the Master System was redesigned and renamed when it launched in North America in 1986 with an added FM Sound Unit.

Master System console — An authentic line-art likeness of the North American/European version of the console!

Mega Drive logo — Originally released in Japan in 1988, the Mega Drive was the 16-bit successor to the Master System. Widely considered one of the greatest video game consoles of all time, the system was home to many classic games such asAltered Beast, Sonic the Hedgehog, and many more.

Genesis logo — Please choose a “Blast Processing” joke to your liking. Are we good here?

16-Bit — Emblazoned on the front of the Genesis, the 16-Bit logo let everyone know you were working with POWER.

Professor Asobin -Before Sonic, Alex Kidd, and Opa Opa, this dapper white rabbit appeared in most SG-1000 game manuals and gave helpful advice to players. Although he was briefly replaced by Dr. Games, he soon returned and appeared in game manuals up until the Mega Drive/Genesis era.

SEGA logo – A SEGA decal collection wouldn’t be complete without the company logo!

GigaDrive logo – This last logo represents something different than the other ones we’ve covered because it’s a “virtual console.” In order for the SEGA 3D Classics Collection to run perfectly on the Nintendo 3DS, developer M2 created the GigaDrive which is how these games take full advantage of the 3DS’s capabilities (such as stereoscopic 3D).