It is 2016 and the political machine is being fired up and sent into overdrive. A firestorm of ads, interviews, fundraising, and debates are being thrown together one after another. Candidates from across the nation are kissing babies and shaking hands and doing everything in their power not to confuse the two! So with these things going on, the people at the Stardock Corporation has thrown together The Political Machine 2016, where the citizens of this great nation can enjoy all this fun and wacky times in video game form. While Stardock Corporation is not known for any big titles, this is the third game in the series. This game will show and hopefully teach you about the world of politics….I hope.

Going into this game, I felt like i knew enough about hot button issues and what to expect about how politics work, but what I did not know is how this game actually worked and if I could handle it. I started off the game on easy mode with 200% profits and the shortest amount of time. I basically wanted to see what being an overlord was like and having fame across the nation.

The game gives you an even amount of people to choose from, which is surprising, considering how the date this article was written, that it is still 2 Democrats & a small country’s worth of Republicans. The game brings in “what if” people like Al Gore, Bill Clinton, Joe Biden, and Elizabeth Warren to name a few.

On my first play through, I tried to think of who would make the best overlord. He would have to be a face in the media that everyone would know, has no problem saying what thinks and thinks what he says, rich, and someone who has the knowledge and personality of a bobble head….and then, he descended, like a gold encrusted hero to the people! 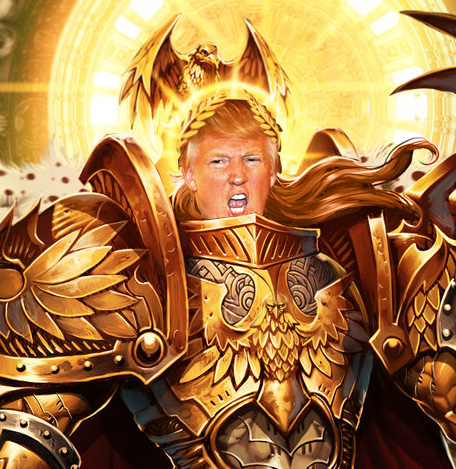 Trumpinator9000. (Seems like a name he would chose for himself if he was a beginning gamer.)

His characteristic’s are:
Pros
Married to Money (Who he named Ivanka)
Fund Raising Ability
Machismo
Cons
Credibility on anything
No Religion wants him
Neither does minorities

“But Kyle..” none of you might ask, “His story can not be written in stone for all of time if he does not defeat a worthy opponent!”

And right you are! So I pitted him against the only person I know that has the silver tongue strong enough to crack that of a bronzed gentleman… 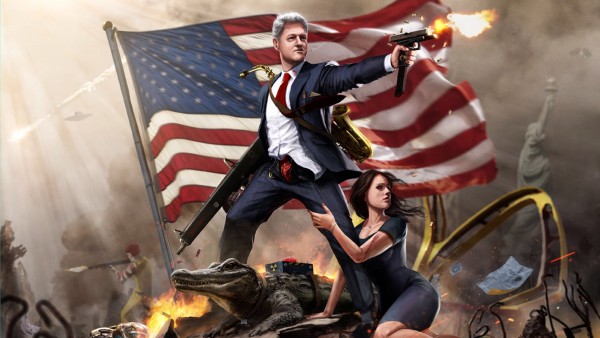 Prez Billy Jeff! The man, the myth, the legend!

His Stats are as followed:
Pros
Experienced and seasoned lightly with salt and pepper
Charisma and a dashing smile
The ability to seduce your wallets with his smooth jazz
Cons
Credibility from his hands on approach to interns
Religion because of his views on interns
Lack of Stamina because of the soul sucking powers of interns

Okay, so the battle is set, these two would go against each other in a slobberknocker, ballroom brawl!! In which they will use their words as their fists and their money as their voice.

Your job is to fly around the country to each state in hopes to win voters so you can take control of each state. You do this by using multiple resources at your disposal. There are plenty of ways to go about this. Fundraising, giving speeches to address the current topics, opening campaign buildings like a HQ or outreach programs, and setting up ads for local newspapers or TV with either supporting your issues or smearing your competitors. Yep, corruption is politics is holding firm in this game. Lying, cheating, and smearing is a choice you can make. Among these options are people you can hire to “get the job done”. Such as fixers, spin doctors, smear merchants, and intimidators to list a few. These all will help you but will cost moral points. What are moral points? Those are the things you, the player, have! Try to hold on to your morals, folks! You can, however, use these hiree’s for good. Speech writers, fashion consultant, and advertisement guru can help you take the lead as well without risking your morals. So experiment with what you feel best suits you.

Throughout the game, you are given opportunities to address certain situations and support organizations or events if you react quickly and make it to the state before your opponent does. You also go on “talk shows” and answer a couple questions on there trying to raise your popularity.

The game address serious questions but never takes itself too seriously. It tries to teach you about subjects but does not go in depth, prompting you to go out and search for the stories yourself. It helps bring awareness subtly and at the same time hoping something sticks.

The game falls short on direction. It does not really tell you about controls to well, so I found myself stuck in the same state for weeks because I did not know how to fly around to other states. So while New York was getting a solid dose of the Trumpinator9000, Billy Jeff was flying around playing hopscotch with my voters! Once I figured out the controls, I played the catch-up game and I thought i was doing well. Running a solid smear campaign and doing everything that Trump is currently doing.

After 21 weeks on the plane (about 21 real world minutes) the votes are in and tallied up!

The winner and new overlord for 4 years is!! 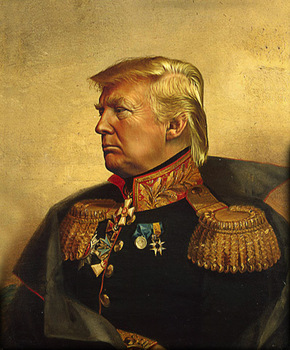