Mario & Sonic at the Rio 2016 Olympic Games will be released on March 18th, and this year you’ll be able to take your amiibo to the Olympics. 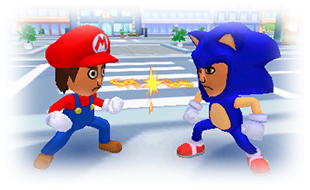 Basically it looks like this means that you can power up your Mii character in the game and put on Mario or Sonic outfits. It’s a little odd that only Sonic and Mario amiibo are comparable with the game, especially considering there are far more characters in the game who have corresponding amiibo.

While virtually every incarnation of Mario can be tapped (Mario from the Smash series, Dr. Mario, Mario from the Mario Party series, Gold Mario and both classic / modern Super Mario Bros 30th Anniversary series), no other amiibo are compatible.

In the game you can play as Mario, Sonic and many other characters to take on new challenging events like Soccer and Beach Volleyball. Golf returns to the Olympic Games for the first time in 112 years and will be a playable event exclusively in the Nintendo 3DS version. Rugby will be exclusive to the Wii U version of the game, which still has a TBD 2016 release date.

Looking through some of the gameplay videos from Nintendo Japan there does seems to be a wider variety of events and gameplay mechanics. The gymnastics floor routine looks to utilize mechanics from a music rhythm game. I’ll admit that these games are a guilty pleasure of mine. And while sinking into a full fledged golf or soccer titles isn’t really my cup of tea, having these sports in bite sized Mario and Sonic flavours really does look like a lot of fun.

There also seems to be a pretty robust story mode with a training element featuring Miis, including many costumes and gear. It seems Sega and Nintendo are really stepping up with the game and aren’t making this just a fluffy sports title.

Mario & Sonic at the Rio 2016 Olympic Games will be released for the Nintendo 3DS on March 18. The game will retail for $39.99 USD. It supports both local multiplayer as well as up to four players download play.