EA DICE released Star Wars: Battlefront on November 17, 2015. While the game has been criticized for not having the same range of weapons, vehicles and campaign play as its previous iteration, the new Star Wars: Battlefront has made some awesome advances, including absolutely gorgeous graphics and stunning sound effects and music.

One notable different between the new Star Wars: Battlefront and its previous versions, is its inclusion of female and minority Stormtroopers. In fact, the game has gone to great lengths to provide a diverse range of skins to choose from, male, female, young, old, black, white. Each are listed innocuously as “Human” followed by a number, with a brief descriptor for each version of the skin of their hairstyles. This is a wonderful way to allow people to put themselves into these skins without labels telling them. I looked at one of the skins for a long time, trying to determine if it the character was supposed to be of Greek or Middle Eastern origin, before realizing it doesn’t matter. In the Star Wars galaxy, those labels have absolutely no meaning. Anyone could play with that character skin and relate to it as they wish. 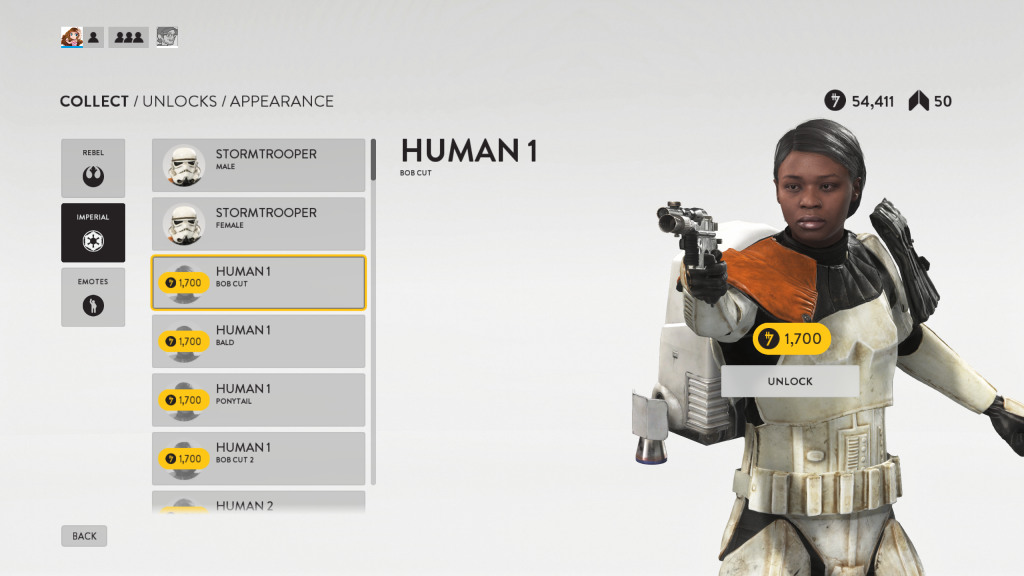 When Polygon asked Patrick Barch, general manager at DICE, about the existence of women Stormtroopers, he responded:

“Why wouldn’t there be? When you talk to Lucasfilm, they’re like, ‘Yeah, of course there are. We just haven’t shown you [in the films].’ For us, it’s about filling in the details in the universe. We help out by asking the question, ‘Can we do this, can we do that? Should we do this or do that?’ And then we work it out [with Lucasfilm].”

Thus, female Stormtroopers during the reign of the Galactic Empire are canon and Star Wars: Battlefront has been sure to include them. This is a great step forward for the community, especially for people like me, who have been desiring to step into some Stormtrooper armor both online and in real life.

Star Wars: Battlefront does a great job of having slight distinguishing physical features for females from males without making them seem sexualized or out of place. The Stroomtrooper armor looks basically the same between the two sexes. The only noticeable differences between the female and males versions of the Stormtrooper is that the female has a slight taper on the lower half of her chest piece, a smaller waist, slightly less bulge on her codpiece and a higher belt.  Overall, it really does look like standard issue Stormtrooper armor on a female body– No ridiculously curvaceous proportions, no missing armor protection and no “boob plates”. 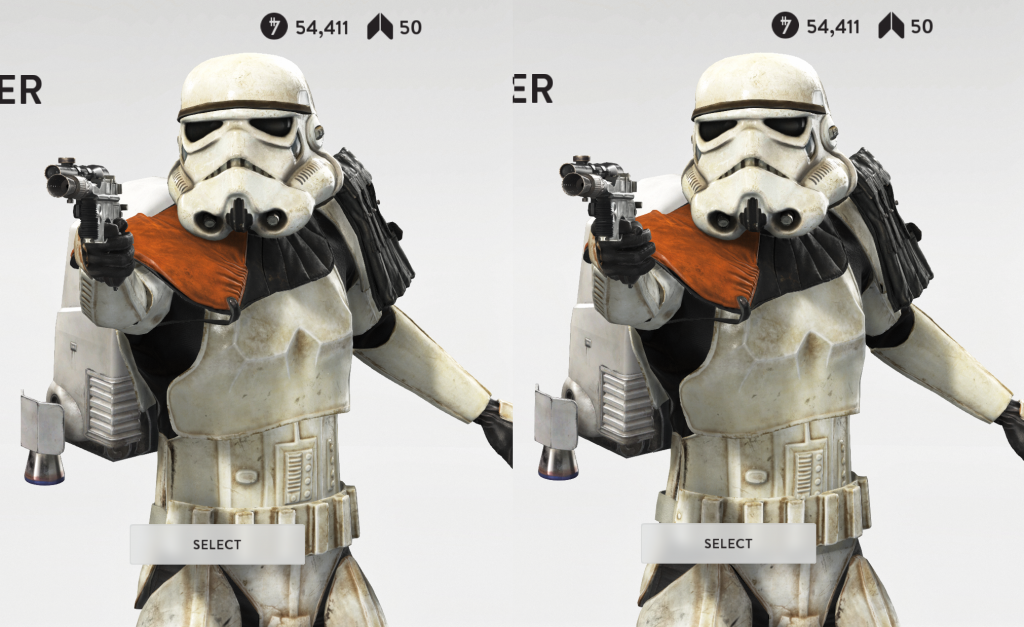 The base Stormtrooper skins in Star Wars: Battlefront (male on the left, female on the right).

EA DICE deserves applause for this, they have done a great job making the Star Wars universe more open and inclusive for all. However, they’ve fallen short of being a truly welcoming game.

It is easy to get lost in overwhelming joy of the sheer amount of diversity of skin selections in the game and overlook where they are lacking. First of all, on a pure numbers side, there are still simply more male choices, with 70 male skins (42 male Rebel skins, 28 male Empire skins) and only 55 female skins (31 female Rebel skins, 24 female Empire skins). Some of this can be attributed to male skins having combinations of hair and beard combinations. Where it is inexcusable, though, is for the high level skins.

In Star Wars: Battlefront, you unlock skin variations as you progress in level. For the most part, these skins are hair customization. However, at level 40, you begin to unlock more noticeable skins that clearly show your peers and the enemy team that you are of a high level. For the Empire, this first skin is a Scout Trooper skin and for the Rebel Alliance it is three alien skins (Sullustan, Duros and Rodian). The problem? All of these skins are male, with male voices.

In fact, of all of the high level skins (of which there are 9), only two are female skins and both of those are aliens on the Rebel side (Zabrak and Twi’lek). The complete lack of special female Empire skins means that, if you prefer to play a female character, you will never get to fully flaunt your accomplishments while on the Empire side. 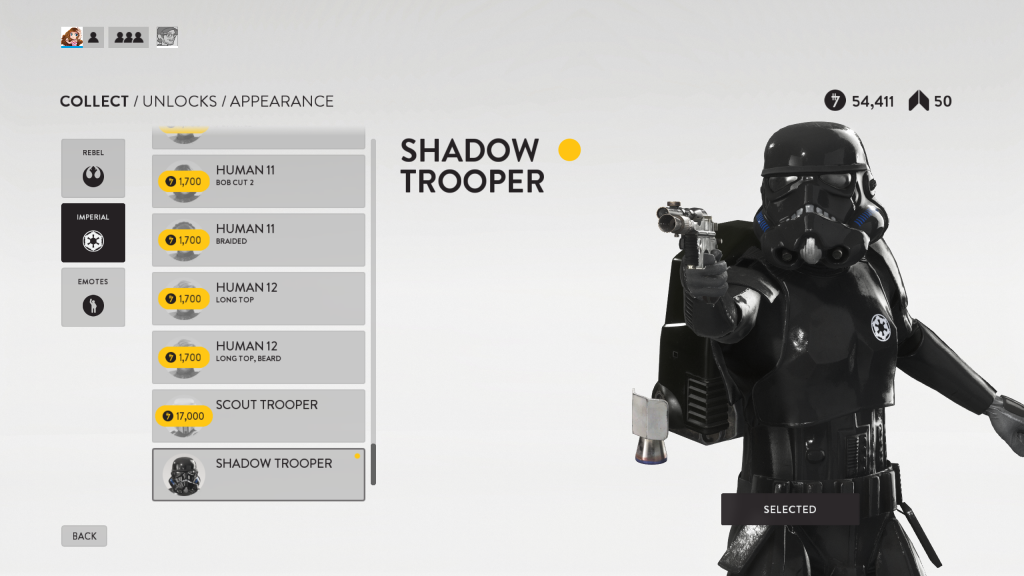 The two high level Empire skins in Star Wars: Battlefront both only have male variants.

With the base Stormtrooper skins, EA DICE showed how little modification is required to provide both a male and a female version. Why would they leave out female Scout Troopers and Shadowtroopers? Using Barch’s own words, “why wouldn’t there be” female Shadowtroopers?

It seems quite a pity that EA DICE worked so hard to be inclusive in their character options only to leave out women at the highest reward tiers. At level 50, I am reminded of this every time I end up on the Empire side and have to choose between having a character that speaks in a voice like mine and one that shows my accomplishments.

Progress has been made, but we don’t have equality yet.