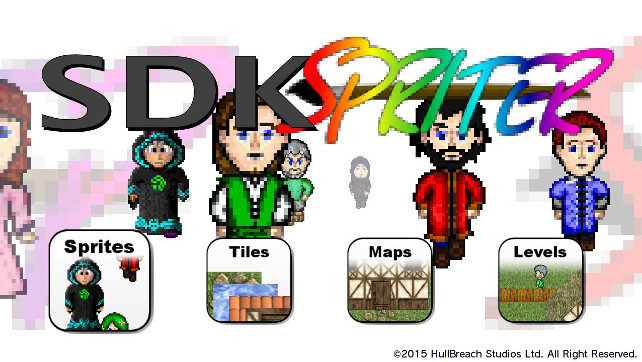 SDK Spriter – Demo Version – SDK Spriter is an all-in-one studio for creating retro video game assets, including character sprite sheets, tile sets, maps, and full levels. The final assets can be exported to Miiverse™ or SDKSpriter.com. Sprite sheets are comprised of 64×64 pixel art characters that have eight frames of animation for each compass direction. The resulting sprite sheet is a PNG image. Tiles sets are comprised of 64×64 tile pixel art that is assembled into a 16×16 grid. The resulting tile set is a PNG image. Maps are 256×256 grids of tiles that reference an existing tile set.

Hogan’s Alley – Use your split-second reflexes and sharp-shooting skills in the practice shooting range. Use the Wii Remote controller to aim and shoot at the old-timey gangsters as they turn, while avoiding the innocent bystanders. Or in another mode, shoot cans and keep them in the air until they reach the platforms.

The Adventures of Bayou Billy – Godfather Gordon has stolen sweet Annabelle Lane. But Bayou Billy won’t rest until his girlfriend is back home safe – even if he has to wrestle crocodiles, beat up Gordon’s goons and endure a shootout! You can even play shootout scenes with the Wii Remote controller.

Wild Gunman – Go back in time or relive it in today’s future with the classic Wild West shootout of Wild Gunman. Keep your hand steady on the Wii Remote controller and get the outlaw before he gets you. If you think you can win the battle against one outlaw, try winning against all of his friends.

Ocean Runner – Meet Gilbert, a bachelor fish who has fallen deeply in love with the beautiful Pearlina. Like all stunning fish, Pearlina’s one and only dream is to have the largest pearl in the ocean and like any love struck fish, Gilbert is on a mission to find it! Explore the colorful corals of the ocean in this thrilling underwater runner! Help Gilbert to win his love by earning enough pearls to unlock all the story pieces and reveal the final ending. Dodge and dash at oncoming creatures as you aim to swim the furthest and top the online leaderboards. Venture through caves and collect power-ups, treasure chests and golden shells in this ultimate surf under the sea!