Cooler Master has always led the way in case design for avid PC gamers, but now it seems they are upping their game in to the enthusiast world with a fully modular case. As someone who themselves uses a CM trooper and loves it, this can not come as better news. Cooler Master has long been my favorite manufacturer of cases and now the MasterAir Maker 8 and 5 show that they are as dedicated to their craft as I am to gaming.

The new case called the MasterAir Maker 5 incudes four USB ports, one of which is USB 3.0 Type-C, a button to activate the fan LED lights, and a button to control the fan speeds. Three fans come included with the case, two x 140mm for the front and one 140mm for the back. Top and Front pannels are detachable with magnets rather than brackets, and can be upgraded with sound baffling to dampen fan noise. 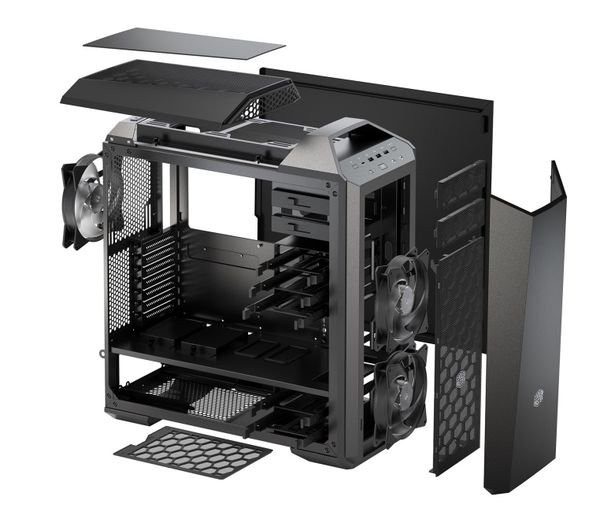 Also announced was the MasterAir Maker 8, which will be its first cooler to use its new 3D Vapor Chamber technology.The new tech combines a vapor chamber and heat pipe, instead of a typical fan radiator assembly. Cooler Master says that it will improve efficiency by up to 19%. Both of the cases are extremely pretty and no doubt will not be cheap but one of the best investments I ever made my was my CM Storm Trooper, and i would not hesitate to spend that kind of money again when building a new machine.