We’ve known for a while that AMD has been working on a new iteration of the Graphics Card Next platform codenamed Polaris. Today the company made it official, with the apparent release of several slides containing information on the new architecture.

As predicted the new cards will be branded under the Radeon 400 series moniker and bring with them a whole host of improvements over the previous generation Radeon 300 series. In terms of the manufacturing process AMD will be using a combination of 16nm fabrication alongside a licensed process from Samsung that uses 14nm. They’ve also focused on the performance per watt, making the Radeon 400 series less demanding on laptops when compared to its predecessors.

Its not just lower power consumption and a smaller manufacturing process that will hopefully set the Radeon 400 series apart. It will also bring with it support for both the HDMI 2.0a and Displayport 1.3 interfaces with a maximum recommended resolution of 4K. Polaris based GPUs will also have improved shader support when compared to previous generation GPUs.

In a press release statement the president of AMD is quoted as saying:

“Our new Polaris architecture showcases significant advances in performance, power efficiency and features.  2016 will be a very exciting year for Radeon fans driven by our Polaris architecture, Radeon Software Crimson Edition and a host of other innovations in the pipeline from the Radeon Technologies Group.”

Check out some of the slides from AMD’s presentation about Polaris / Radeon 400 after the jump: 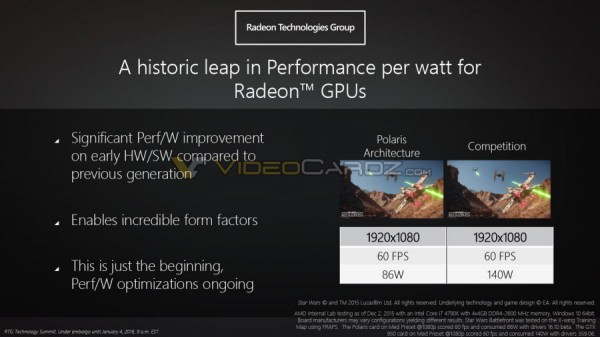 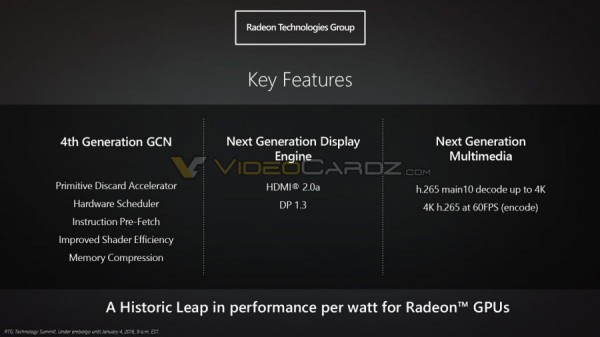