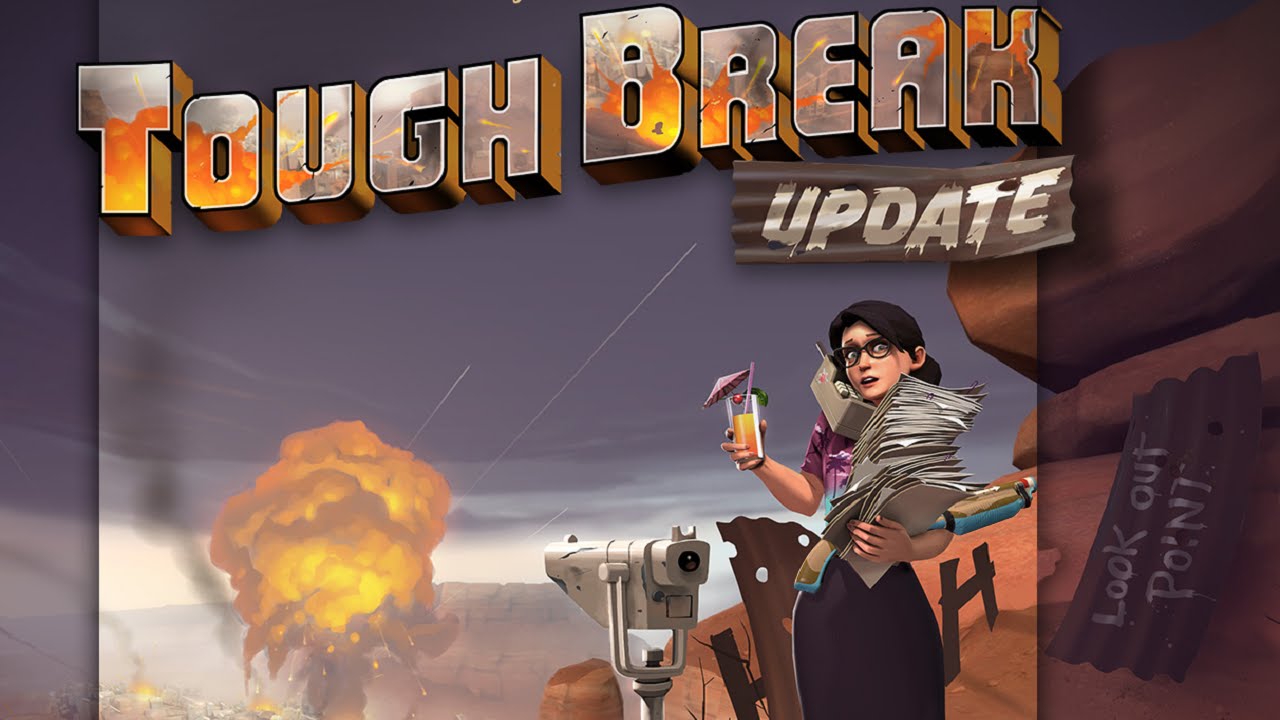 Sometimes it can be easy to forget that before all the Overwatch hype, before Paladins, before Destiny, there was a little game called Team Fortress 2. Well Valve hasn’t forgotten. In fact they have decided to keep updating this little game that could in their newest addition the “tough break” update. TF2 has rarely gone a year with out major new additions and it seems that 2015 is not to be that year. The game has a large healthy player community, and its nice to see that Valve is still showing it some love.

The Tough Break update adds a combination of free and paid content to the game. There are four new community-made maps for everyone to play and a number of gameplay changes and balance tweaks being made (more on those below). Similar to the Gun Mettle update earlier this year, you can purchase access to the Tough Break campaign, a three-month event where you’ll be able to complete new contracts (essentially in-game missions) and earn new one-of-a-kind weapons. Basically the same as a counter strike operation, this type of buy in DLC allows everyone to play the maps, while players with a little more pocket cash can chose to do missions that do not disrupt the rest of the game play (most of the time). Its extremely refreshing to see this type of strategy being employed over the current king of DLC the dreaded “microtransaction”.

Over the three next months, players will have access to 26 contracts in all, some of which will be weapon-specific. Since there are some weapon specific quests, Valve have created a new program to allow players to “barrow” a weapon they need for a gun specific contract. This solution is both brilliant and practical. Playing with a new weapon will motivate people to buy that weapon on the market, and  it will allow all players access to the otherwise gated contracts that need a specific weapon.

Completing contracts will reward the player with special weapons or weapon cases. This is identical to the already in place Counter Strike GO model, and the keys even have the same price (2.50USD). Aside from including a different slate of items, these cases can contain strange- and unusual-level items(but dont expect them to). Additional benefits of purchasing the Campaign include gettign one free cosmetic case ever week (still needs a key to open) and the contact stamp, which will track your progress during the mission, leveling up as you hit milestones. As usual in game hi-scores will be displayed for players who get the farthest in the campaign. New taunts are also arriving for purchase in this update, including the bagpipes, and a few inside refrences to TF2 players and machinimas.

If you want to read the full patch notes they are linked here but there are lots of small class specific tweaks which we wont be going in to today, as is usual for these events, this one will last three months, and when its over, it will presumably take its unique weapons, and items with it, so get em while you can.