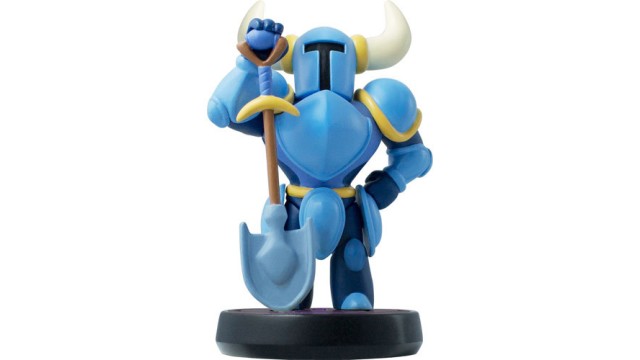 Yacht Club Game’s Shovel Knight will make his amiibo debut on January 8th in North America and December 11th in Europe the developers have announced via their blog. The reason for the almost month long gap between launches in the two territories stems from an issue with the figure’s production. Rather than only ship a limited supply to North America for Christmas Nintendo & Yacht Club Games have decided to post-pone the figures release.

Once you get your hands on the blue digging hero what can he be used for? Here’s a rundown of everything you can do with your new blue friend once you have him:

Cooperative Multiplayer (exclusive to Wii U)

Will compatibility for the Shovel Knight Amiibo go beyond the 3DS ports of the game that bears his name sake? Right now we don’t have a definite answer to that question – rumors surfaced last August before the official reveal of the figure suggesting that Shovel Knight may in fact appear in Smash. Nintendo has made no official announcement of Shovel Knight as a playable character in Smash Bros – the last officially announced character was Cloud Strife from Final Fantasy VII during last month’s Nintendo Direct.