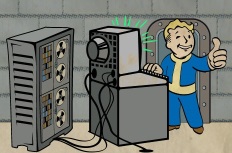 A modder that goes by the name xxdeathknight72xx has found an unused weapon in Fallout 4’s data and has since released it as a mod on NexusMods. This may be something from an unreleased DLC, or simply something they chose not to include in the final game for whatever reason. The gun is a sweet looking “underwater” weapon that’s basically a harpoon gun in both appearance and function. The mod itself overrides the Railway Rifle, as it is a direct replacement for the time being. I’ll include a video from a YouTube user named Tyrannicon featuring the mod at the bottom of the post right after the mods’ link.

You can find the gun/mod here.