Some juicy information has been leaked today ahead of Blizzcon detailing the pre-order bonuses for Legion, the next expansion for World of Warcraft along with its release date. It was leaked through Blizzard’s own website. The expansion will raise the level cap to 110, introduce a new class called the Demon Hunter and add a new continent to Azeroth named The Broken Isles. The image reads “Expected game release on or before September 21st, 2016.” That gives us just under a year until Legion is released. Pricing seems to go from $49.99 for the standard edition to $69.99 for the digital collectors edition.

The digital deluxe touts early access to the Demon Hunter Hero Class, a free character boost to 100, Illidari Felstalker mount, and a pet named “Nibbles” which also appears to be a Felstalker of some sort. There seems to be content for Diablo 3, Heroes of the Storm and Starcraft II.

This would also be a good place to mention that the beta for World of Warcraft: Legion starts this year.  You can sign up on your account page on Battle.net.

Also leaked ahead of Blizzcon today was the announcement that Overwatch will be released on consoles.

Blizzcon starts today at 2pm EST. Make sure to tune in to catch all the latest news and keep checking here for details later on. 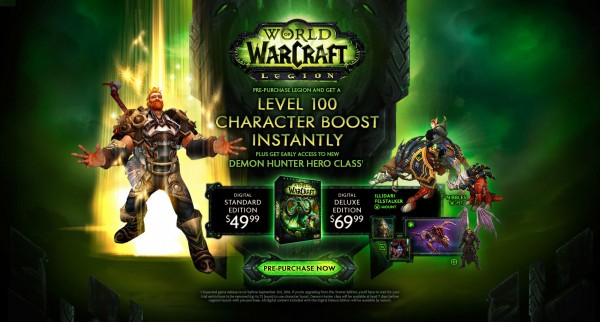